Journalism in Kyrgyzstan: Feeding at the Public Trough 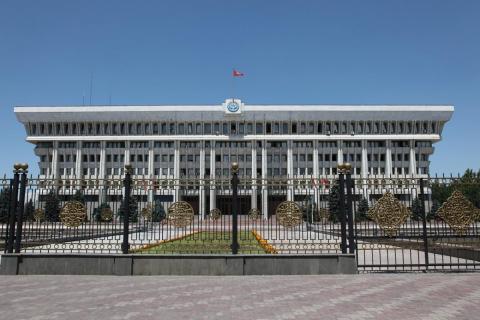 In a country where media heavily rely on government funding and informal payments, there can’t be much independent reporting. Kyrgyz journalists attest to that.

That media outlets in Kyrgyzstan take informal payments from politicians and state officials is not a secret anymore. The list includes prime ministers, mayors, MPs, current and former presidents. They sponsor content in their own media outlet, if they have one, or pay journalists from other news outfits to cover the topics they need to be covered. Some of them even fund websites that crank out bunkum about their enemies.

Examples of spineless journalists taking money to spin content are found everywhere. But in Kyrgyzstan, informal payments are one of the three major sources of financing the media. The other two are the state budget and advertising.

But it is informal payments and the state money that keep most of the media afloat in the country, an environment totally unconducive to independent reporting, a new report issued by the Center for Media, Data & Society (CMDS) and Promotank, a think-tank in Kyrgyzstan, shows.

The Kyrgyz government spent in excess of US$ 10m on media in 2018, the equivalent of roughly half the advertising market in the country, according to the report’s estimates. That includes US$ 7.6m allocated directly from the government budget, three-quarters of which goes to the flagship broadcaster KTRK, as well as cash from state-owned companies, mainly banks and mining firms.

“An overly dominant position of the government in the media harms the country’s journalism in many ways,” wrote Gulnura Toralieva, the report’s author.

First, the reliance on government cash forces media outlets to become biased in their reporting. KTRK, Kyrgyzstan’s state broadcaster, simply propagates state policies. Second, disproportionately large government spending in the media discourages investments in journalism and clobbers attempts to innovate and experiment with journalistic formats. Finally, lack of a strategic plan to fund the country’s media only destroys the efficiency of the sector.

Philanthropy and foreign news media are left to tip the balance. But that is hardly enough.

The contribution from philanthropic donors is only sufficient to keep a couple of news outlets in business. Philanthropies spent in ten years less than what the Kyrgyz government spent in one year. The news output from some Western governments-funded broadcasters, such as BBC or Azattyk (a U.S.-supported service), helps enrich the overall news offering. But even some of these broadcasters, intimidated by the Kyrgyz government, are visibly restraining their criticism.

Only the internet could provide the solution. Kloop is a good example. But it’s only one of a few independent outlets and relies heavily on donor money. Moreover, many politicians are also busy funding and taking over internet media.

“It becomes clearer,” the report concludes, “that the biggest challenge for Kyrgyzstan’s independent media in the near future will be to build a business model that would allow them to operate independently, grow their audience and compete in an overly politicized market.”

A tall order for sure.

The Funding Journalism: Kyrgyzstan report is part of Media Influence Matrix, run by CMDS through a global research and advocacy alliance, the Media and Power Research Consortium, which consists of more than 50 organizations, including academic institutions, advocacy groups, journalist networks and NGOs. The main goal of this project is to investigate the profound impact that rapid shifts in policy, funding and technology are having on journalism today. Each country report consists of three studies, covering politics and policy, journalism funding and technology.