From Reporting Styles to Propaganda: Portrayal of Migration in the Media 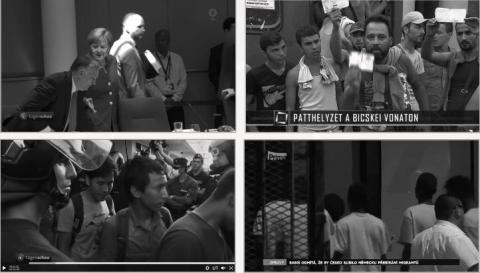 A new study on the portrayal of migration in the Czech Republic, Germany, Hungary and Poland found that the content of several channels matched all or most criteria of propaganda.

Jointly with Datalyrics, a Prague-based non-profit, CMDS conducted a qualitative study of migration portrayal in primetime newscasts of major private and public televisions in the Czech Republic, Germany, Hungary and Poland. Two fourteen-day periods were put to study, one starting on the day of the V4 migration policy summit held on September 4th 2015, another beginning on the first day of the EU migration policy summit held on June 28th and 29th 2018. Each of the eight broadcasters put to study showed a distinct style of reporting.

Watch David Růžička, Founding Editor of Datalyrics, who shared the main findings of the research:

A habit common to all but one – the German public-service ARD – was a pervasive use of the passive voice. This practice contributed to a common portrayal of refugees and migrants as either vulnerable or obstinate, but almost always standing at the receiving end of the decisions of other actors (public institutions, non-profits) rather than forming their own fate.

The degree to which the underlying causalities of events were described varied greatly. While ARD brought in rich in-house framings, most other channels often settled for explanations offered by politicians. ČT, RTL, TVN and even Prima, however, did offer a plurality of framings featuring politicians of various creeds.

All V4 broadcasters portrayed disputes about migration between the V4 and the EU in terms of interests rather than ideas, through frames of a power struggle that featured little description of the substance of the disputes, offered less international context and possible solutions on the table. This left the idea of outsourcing migration policies to third countries unchallenged.

Newscasting of several broadcasters was compromised by a desire to make arguments in the news. The content aired by three broadcasters matched all or most criteria of propaganda: The Hungarian state-run MTV in both 2015 and 2018 periods, the Hungarian private TV2 and the Polish TVP in the latter period. The Polish brand of propaganda was ‘loyalist’: TVP cheered for the government and used the topic of migration as a mere convenient background motif.

The Hungarian propagandistic content, on the other hand, was intensely ‘subject-specific’. It cast migration as one of the three singular threats to Hungary (migration, "Soros", "Brussels"), in line with the subjects of the recent government campaigns (TV2 was the largest receiver of these de facto subsidies). MTV and TV2 constructed the image of threat often by associating migration with crime and migration, using unverified stories from hyperpolitical websites and Kremlin-owned outlets, content from the self-referential, centralized pro-government media system and confirmatory narratives by talking heads from pro-government think-tanks.

Several channels portrayed refugees and migrants as masses, often filmed from behind. The broadcasters used quick cutaway shots that were not informative for the viewer. ARD’s content, on the other hand, often featured close-ups and exhibited great unity between visual and verbal content which further contributed to the overall clarity of its reporting.

The project was co-financed by the governments of Czechia, Hungary, Poland and Slovakia through Visegrad Grants from International Visegrad Fund. The mission of the fund is to advance ideas for sustainable regional cooperation in Central Europe.