Can Moral Rights Survive in the Digital Age? 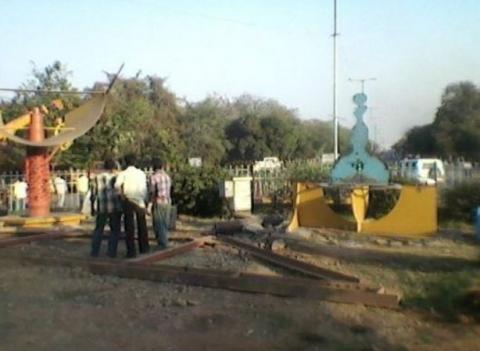 Modifying a piece of art can land you in court, according to legal provisions endorsed by most of the world’s nations. But applying them online is an uphill battle.

Jatin Das, one of India’s most renowned sculptors, was commissioned by the Steel Authority of India to make a sculpture in 1995. One year later, the sculpture, which he christened “The Flight of Steel,” was mounted in a roundabout intersection at the entrance in Bilhai, a city of one million people in the Indian eastern state of Chhattisgarh.

But 16 years later, in one of his visits to Bilhai, Mr Das could not see his work anymore. He soon learned that, as local authorities needed the space to build a flyover, his sculpture was moved to a zoo where he found it deformed, pieces of it missing.

Mr Das filed a lawsuit with the Delhi High Court claiming that the Steel Authority of India has infringed his moral rights under Section 57 of the Copyrights Act. The court decided in his favor stating that “further damage and mutilation to the plaintiff’s sculpture” was likely to cause “irreparable injury” to Mr Das’ “reputation and professional standing,” according to court documents. A final decision is still pending.

Thanks to legal provisions on moral rights, which are now endorsed by 176 countries, integrity and attribution are protected when it comes to creators of artistic and literary works, including paintings, sculptures, murals, music compositions, videos and other cinematographic works. Practically, art creators can sue anybody who modified their work. So far artists have used the moral right provision to claim damages or stop alteration of their works.

But is that provision applicable and can it really work in the digital realm where swathes of content are shared and altered every minute?

The moral rights go beyond economic considerations of copyright, protecting the personal connection that artists have with their work.  Moral rights cover two things: integrity and attribution.

The right to integrity aims to regulate how artworks are displayed and to prevent adverse changes made on artwork that would alter the essence of the work, poorly reflecting on the reputation of the artist. The right of attribution allows artists to claim their name to be associated with their work.

In short, moral rights forbid people to fiddle with and use artwork without crediting its author.

What few people know is that these entitlements rest with the artists even after the sale of their artwork. Mr Das’ case was a good example, but a landmark court case establishing the personal connection of the artist was the Amar Nath Sehgal vs. Union of India case where the Delhi High Court upheld the moral right of an author for the first time in India. Commissioned in 1957 by the Indian Government, a sculpture made by Mr Sehgal was removed in 1979 from the lobby of a major congress center in Delhi where it lived for nearly 17 years. The court ordered the government to pay the artist compensation for damage caused to his integrity in relation to his artwork.

Moral rights were included in 1928 in Article 6 (bis) of the Berne Convention, a global copyright treaty that had been adopted in 1886. Today, the Convention is administered by the World Intellectual Property Organization (WIPO), a UN agency. Only 20 or so nations, mostly from Africa, Middle East and Asia, have not signed the Convention. Afghanistan was the latest member to join in 2018.

The countries that are signatories to the Berne Convention are obligated to provide for moral rights in their own intellectual property legislation.

Art in the Copy-Paste Age

But while it is easier to claim moral rights when the artwork is displayed and accessible in one and the same place, it can become difficult, if not impossible, to have any control of pieces of art and preserve the personal connection with their creator if such works are omnipresent as it happens with any content online.

Mr Das said that art and science have a close connection and that, with the spread of internet, everything is now accessible to everyone. It is every person’s decision how to treat a work of art online, he said in 2015. Altering a work of art is often needed. For example, graphic designers sometimes change the original size of the paintings because art galleries need to prepare exhibition catalogues. It is not right though when these alterations affect artwork used for other, usually commercial, purposes. Suchi Khanna, another celebrated artist in India, found her paintings in an online calendar. With no control over how her work is used, she believes that the images were nicked from an online art catalog.

Sharing and changing art online is a cakewalk and not much can be done apparently. But artists are pushing back. In 2018, Canada's Federal Court ordered two art-selling companies to pay US$ 100,000 to Andrew Collett, a professional photographer. Mr Collett had a contract with the two art sellers, but their relation went bad and he didn’t want the companies to continue selling his art. Not only that they continued to do so, but one of Mr Collett’s works was published on the internet at a lower resolution than the original and without appropriate attribution. Moral rights were breached, the court found.

In a separate case, an Italian court found BMW Italia, the local distributor of the eponymous German carmaker, guilty of infringing the moral rights of San Diego and Mr. Baratto, a company that had produced a series of videos promoting BMW cars. The car company shortened the videos, aired them without notifying their authors and failed to credit them for their work.

Mira T. Sundara Rajan, an academic at the University of Oxford, in a paper published in 2002, wrote that we should see in the digital dissemination stream less a form of disruption and more a way of democratization of artistic works where the interest of the artist and the audience merge. But she agrees that artists should be more aware about their rights.

The internet itself can provide the solution, Mr Das says: creating more online forums to discuss this issue, for example, would empower artists to learn how to defend their moral rights in the very space where they are most frequently breached.

Shubhangi Heda is a Student at the School of Public Policy at Central European University, pursuing a specialization in Media and Communications Policy.