Student Protests in Albania: When Digital Activism Is Not Enough 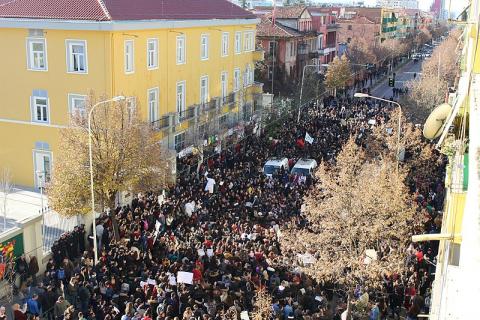 Social media helped Albanian students win a tough battle with the government. But to achieve systemic change, old-school tools should be brought out of mothballs.

Following four days of student demonstrations in the capital Tirana, the Albanian communist regime caved in, legalizing political parties. It was 11 December 1990, the day that heralded the end of over four decades of communist dictatorship.

It took 28 years for a demonstration of that magnitude to happen again in Albania: on 4 December 2018, students took to the streets in what quickly became the largest mobilization of students in the country since 1990.

This time, the students’ anger was stirred by a new wave of increases in university fees, which had been approved by the government last May, allowing public universities to charge students roughly €1,500 a year. Such sums are dear for an impoverished country like Albania, a southeastern nation of 2.8 million where people bring home €350 a month on average. Students asked the government to halve the fees.

No Leader, No Impact

Following three weeks of protests, students won again. But this time, they had a weapon that their parents in the 1990s could not even think of: social media. It is what made this movement unique: students started writing posts expressing their discontent on social media, mainly Facebook. Sharing the same frustrations, they used social networks to mobilize.

Before the internet and social media, the process of organizing a successful demonstration required many months of preparation and coordination.  Thanks to their popularity, social media have become effective engagement platforms for political debate where people’s grievances can be openly addressed and where people can discuss issues they feel strongly about. At times, these grievances reach their tipping point on social media and turn into demonstrations in real-life.

Being easy to use and difficult to be controlled by any central authority is what makes social media platforms such powerful mobilization tools. They are particularly disruptive in authoritarian countries or during media blackouts: periods of time when mainstream news outlets refrain from covering a topic or event as it was the case of the student movement in Albania during its first few days.

But although many activists and media experts go into raptures over the power of social networks, the actual potential of social media to achieve systemic change is increasingly questioned.

One reason could be that movements spurred through social media, a product of chaotic online networking, usually do not have a real leadership. This makes it difficult for such movements to have a long-term, actionable strategy and discipline, things that a hierarchical structure is more suited to achieve. The student movement in Albania is a good example: the demonstrations have been successful in pressuring the government to roll back on the rise of enrollment fees, but other, much bigger goals of the protests such as wringing out corruption from the educational system, fighting widespread plagiarism among faculty, and betterment of infrastructure can only be achieved by a long-term and sustainable movement that social media alone can’t provide.

During the recent Albanian protests, there were groups of students working on creating committees of students in charge of setting the agenda, drafting action plans and managing the movement in the long run. However, “since the beginning, the nature of this movement has been really impulsive and unplanned, and it generally continues to be so,” said Lea Tabaku, one of the students closely engaged in the protests’ organization.

Thanks to their massive popularity, social media are likely to preserve their role as mobilization tools. However, some of their weaknesses need to be mitigated and this can be done only through traditional methods: hierarchical structures built to achieve long-term goals.

“Any democracy movement may just be authoritarian on the inside,” said Cameran Ashraf, professor of new media and global communications at Central European University (CEU), a private school in Budapest. “You need to have some structure because you need to count on people. The fundamental element of democracy is counting on people.”

The recent Albanian student movement has not achieved systemic change. But students say it’s not too late. “We just know that we are not going to ignore the problems and issues within our educational system, and more,” Tabaku said. “We are going to deal with them and make things right for us and the generations to come.”

This will need a new model of activism: a hybrid of traditional strategies and modern tools. Will Albanian students be able to pull this off? Only time will show.

Bruno Hasa is a master student of Public Administration at Central European University with an interest in media, communication and development.

This article was documented and drafted as part of the Practicum Class conducted by Marius Dragomir at the CEU School of Public Policy (SPP).