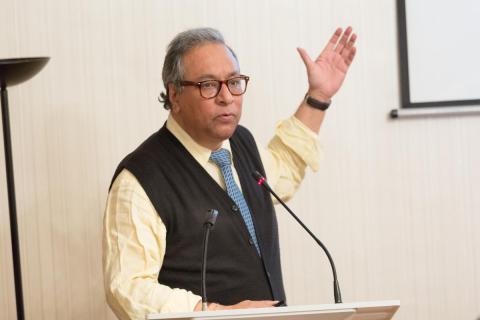 The Center for Media, Data and Society at the CEU School of Public Policy launched the Public Media Speakers Series on March 2 with a public lecture by Jawhar Sircar, India's longest serving culture secretary. Sircar also headed two of India’s national public broadcasters, All India Radio and Doordarshan, for nearly five years. The event was organized in cooperation with the CEU South Asia Research Group (SARG).

In his introductory remarks, CMDS Director Marius Dragomir explained that the series was being organized with RIPE@GLOBAL, a global network of academic researchers and strategic managers with expertise in public service media, to “take a fresh look at this topic.” He went on to ask, “Who is best positioned to play the public media role today?” 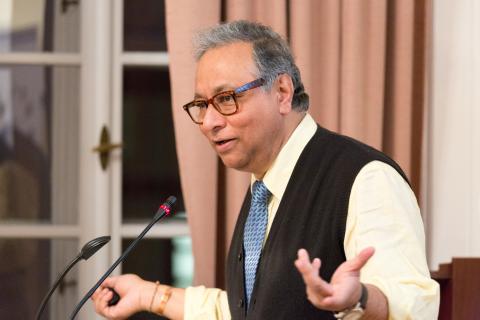 Drawing on experiences from his more than 40-year career, Sircar provided a rich perspective on public broadcasting in India, a system that now includes 420 radio stations that broadcast in 23 languages and 176 dialects. He highlighted the important role that Indian public broadcasting had played in the spread of “street Hindi” in India. “This exponential reach of Hindi was the contribution of public radio. It was public radio that made this happen,” said Sircar.

He also credited public media for playing a critical role in strengthening democracy in India. He noted that although “we sometimes have problems with groups boycotting elections,” the military has never intervened the way it has in many other countries. “It was the voice of radio,” said Sircar, “that got people out to vote” even during times when they were being encouraged by particular groups to boycott the elections. “During times of violence and threats, radio and TV reinforced confidence,” he said.

Sircar also credited public media with having “knit” India together. It did this by broadcasting enormously popular shows such as Krishi Darshan, which reaches 89 percent of India’s population and has been on the air for more than 50 years. The Indian population has also come together to watch other public media broadcasts including national day celebrations and sporting events. “Public broadcasting has played an important role in nation building,” Sircar said. “Whenever there is a crisis, people turn on the radio,” he observed. Sircar pointed out that the news, although it is broadcast throughout India in 92 languages and dialects, is “worked out” in Delhi.

Sircar blamed public broadcasting’s failures on “bureaucracy, bureaucrats, and bureaucratic.” Among these failures was the fact that public broadcasting in India had not yet secured “its autonomy and professionalism.” Other failures that he mentioned was that Indian public media relied too much on outdated programming and was not revenue-oriented. “How do you run a broadcaster,” he asked, “if you are told it is "beneath their dignity to earn revenue.”

Sircar concluded by saying that public media in India needed to find a role for the future. “Its role was to knit India. That’s been done. Political union has been achieved. What next?” he asked.

Have a look at our interview with Jawhar Sircar on the challenges of public broadcast media in India and the role it should serve in the future.