Bognar on Forcing an Independent Hungarian Radio Station off Air 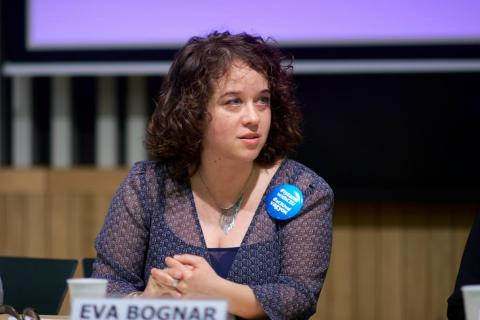 “We still have independent media, but they manage to reach fewer and fewer people,” CMDS’ Senior Program Officer and Researcher Eva Bognar said to de Volkskrant, the Dutch daily with the third largest audience in the country.

The article ‘Hongarije haalt kritische radiozender uit de luch’ (Hungary Takes Critical Radio Station off the Air) covers the story of Klubradio, one of the last remaining independent radio stations in Hungary. Its license was not renewed by the regulator because of alleged breaches in the law, therefore it can only broadcast on the internet.

Klubradio is not the only independent radio station in the country, but the main one, Eva Bognar said. It had 150-200 thousand listeners every day, and it was also important because “radio is an accessible medium. You can listen while cooking or on the way to work, some people even have it on all day in the background,” she added.

In addition to its own news programs, Klubradio plays another important role. It gives publicity to stories investigated by smaller organizations, for example about the large-scale corruption in the country. "These stories reach a large group of people via the radio who would otherwise not hear about this," said Bognar.

With Klubradio disappearing from the air, pro-government media has a monopoly on radio waves. “66 percent of Hungarians listen to radio every day. It is a powerful medium in which Klubradio had an important place. The government has therefore had its sight on the station for some time," Bognar concluded.