Quick and Catchy: How a Lebanese Media Outlet Captures Audience With Explainer Journalism 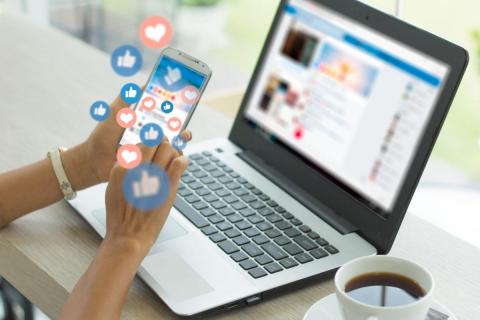 It has been ten months since the Lebanese government was toppled in a cross-sectarian uprising in what many hoped would be the start of real political reforms in the country. However, after the government fell in October 2019, the country spiraled even further into an economic and political crisis. Exchange rates toppled, banks closed their doors, and citizens were left unable to withdraw money or buy basic goods. Combined with the COVID-19 pandemic, the economic and political situation was dire. On August 4, a blast at the city’s port– an explosion of ammonium nitrate which registered 3.3 on the Richter scale - wrecked a large section of the city. Many thought that this is both the nail in the coffin and a telling sign of the systemic corruption and inability of the country’s ruling elites to govern.

The devastating blast and the subsequent guilty verdict on the 2005 assassination of former Lebanese Prime Minister Rafik Hariri at the international trial in the Hague have both put Lebanon in the international spotlight. It has also been a difficult year for Lebanese media, as the financial crisis has brought many television and print media to their knees.

Historically, Lebanon’s media is divided along sectarian lines, with businesspeople and politicians owning and controlling the editorial line of most, if not all, television and print media. This level of media capture has reached such proportions that many Lebanese “expect and look for” the media that suits their point of view. Despite this, Lebanon’s media landscape is diverse, and for a relatively small country, it has an enormous concentration of media. According to a Reporters Without Borders study, there are 10 private dailies in three languages and over 1,500 weekly or monthly magazines.

In the last year, one media collective has stood out, not just in Lebanon but in the region as well. Inspired by the “explainer journalism” of the likes of Vox and the youth-focused native–to-platform media such as France.tv Slash, Megaphone has stood out amongst the rest in not just its uncompromising coverage but also its innovative methods.

Explainer Journalism: One Model for the Future

Founded in 2017 by a collective of activists, Megaphone's goal is to talk about issues that are often overlooked in Lebanese media, such as the Kafala (sponsorship) system, the rights of refugees, LGBT issues, and other stories that are constantly marginalized in the country, if they are addressed at all.

“We are a flat organization, decision-making is distributed, and everyone has a say,”

When Megaphone was founded, its founders believed that there was a missing element in Lebanese media that could really engage the very young population that is unengaged and shunned outside of the political discourse.

Explainer journalism is about simplifying complex issues and presenting them in a way the audience can understand. For Megaphone, it involves adding short quotes or text to what Megaphone calls “cards” – well-designed one slide cards/images added to Facebook and Instagram, with accompanying text.

“We had to play the game of being attractive, generating content that was visually appealing,”

says Khalil. But that is not something to be ashamed about. A strong visual identity that links the various pieces of content together provided cohesion. Once they established the visual identity that set them apart, they worked on their tone of voice, and on how they explained subjects and stories on each platform.

Khalil says that the strategic positioning of Megaphone is existing to be native on each social media platform, meaning that “the platforms do not seem like each other at all”.

In Lebanon, Facebook has the biggest base of Lebanese users out of any social media platform. Megaphone naturally started there. Twitter is used in the country, but for a different purpose. Users are there mostly for sharing information in emergencies and about safety. YouTube is popular for entertainment. According to Khalil,

“the Facebook crowd is very different from the Instagram crowd, which up until not a long time ago, was not a politicized crowd.”

Prior to October 17, 2019, Megaphone produced a weekly roundup on Instagram that was popular. This was enough for that particular audience that simply wanted to know what is happening without getting into the details. When IgTV was launched, Megaphone started using it actively and the videos just took off – from around two videos a month and 4-8 sets of cards a week, to producing the same number per day. A surge of followers on both Instagram and Facebook followed the first three months of the revolution.

According to Khalil, knowing the needs of each “crowd” (audience) on the different platforms is central to understanding what kind of content to produce. On Facebook, the crowd is “critical” but on Instagram they are “adopters who are less likely to disagree with us,” says Khalil of the Lebanese case, and this informs the decisions around the platform-specific content. Either way, when content is boosted on either platform, it is promoted specifically to groups that don’t align with their particular vision or political ideology. The reason is the desire to generate debate and get out of the bubble of like-minded people speaking only to one other.

Even though Lebanon is considered one of the most “free countries” when it comes to media in the region, its media landscape is far from free.

“Most media is partisan media and that is the nature of the media landscape, and honestly most of the population would consume that and they’re fine with it. Our idea was to start talking to the crowd that thought that was a problem,”

Along with more traditional online media platforms such as Daraj and Raseef22, other new media groups gained prominence over the last year, including Akhbar al Saha (News from the Square), which specializes in reporting from the protests, to Thawra TV (Revolution TV), which is an online television channel. However, none have quite proven to have the same endurance and flexibility to adapt to post-protest developments.

says Khalil. Super speedy content takes three to four days to research and write, and other content may take weeks to finalize. Some webdocs take months. Knowing how to target the content with the right speed on the right platform is what sets Megaphone apart.

Before the uprising, Megaphone was posting one or two videos a month, each of which received between tens of thousands and 200,000 views, as well as a few cards, with similar views. After the October 2019 movement, it started publishing daily cards and numerous videos that have cumulatively been watched millions of times. Its most popular video recently on Facebook is on the topic of the financial crisis, while on Instagram, the most popular video is a card about Gebran Bassil's grilling by a CNN anchor.

Lidija Sabados is a media development consultant and researcher. She is currently the Executive Director of Syria Direct, an independent media organization based in Amman, Jordan. She has over ten years of experience in media development and freedom of expression, having worked for various non-governmental organizations and intergovernmental agencies. She has also worked as a writer, editor and communications consultant.