The Troubled State of Press Freedom in Central Europe 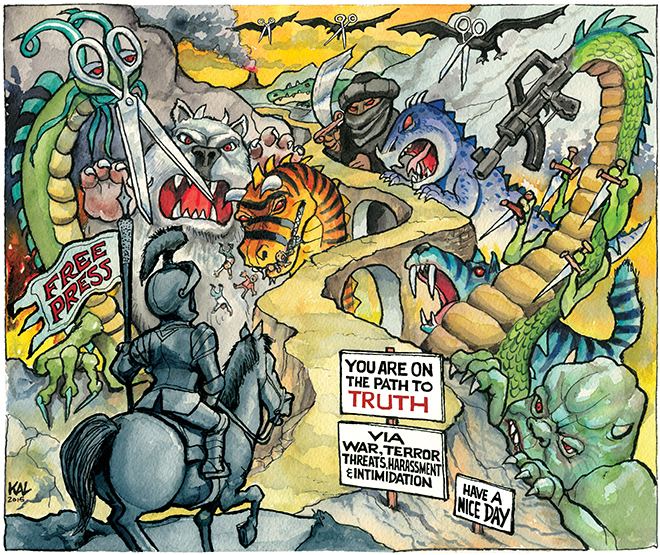 Freedom House’s Freedom of the Press 2015 report highlights the global deterioration in media freedom, including the negative impact of increasingly opaque media ownership, backsliding in democratic governance, and regressive regulations on press freedom Central and Eastern Europe. Recent events in Hungary have been particularly troubling, as the media environment has suffered due to the numerous changes to the legal and regulatory environment as well as political and economic pressures. In the Freedom of the Press report, Hungary has experienced one of the largest declines in the world in the past five years, and is rated as a “Partly Free” media environment.

In order to consider these issues and highlight the struggles on the ground, Freedom House and Central European University’s Center for Media, Data and Society (CMDS) will bring together in-house experts on press freedom, prominent journalists, and media policy researchers for a discussion on May 21 at 18:00. Panelists will put the challenges facing journalists and media outlets in Hungary and other Central European countries into a comparative perspective, highlighting regional and global threats to independent journalism.

András Pethő (moderator) is an award-winning journalist and a co-founder and editor for Direkt36, an investigative journalism center launched in 2015. Before launching Direkt36, he had spent much of his 13-year-long journalism career at Origo, a Hungarian news portal. He resigned from Origo in June 2014, in protest of the dismissal of the portal's editor-in-chief.

Kate Coyer is Director of the Civil Society and Technology Project for the Center for Media, Data and Society in the School of Public Policy at CEU. Her research examines the complexities of media practice and policy, digital rights advocacy, community media and communication for social change, and the intersection of online and offline activism. She currently leads EU-funded projects for the Center on digital rights and media access including the Virtual Center of Excellence for Research in Violent Online Political Extremism (VOX-Pol), and co-organizes the Center’s annual flagship summer institute on internet policy advocacy.

Jennifer Dunham is the project manager of Freedom of the Press and Freedom in the World at Freedom House. She is an expert on global press freedom trends and the author and editor of numerous publications on issues ranging from press freedom to governance in sub-Saharan Africa. She holds a MA in international relations from New York University and a BA in history-sociology from Columbia University.

Sylvana Habdank-Kołaczkowska is a regional specialist and the director of Nations in Transit, Freedom House’s annual survey of democratic governance from Central Europe to Central Asia. She serves as a Central Europe analyst and adviser for both Freedom in the World and Freedom of the Press. She holds an MA from Harvard University in Eurasian Regional Studies and a BA in Political Science from the University of California, Berkeley.

The Facebook event page of the panel discussion is available here.