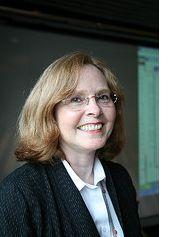 Ellen Hume is the Annenberg Fellow in Civic Media at CMCS. Appointed in 2009 by Michael Delli Carpini, Dean of the Annenberg School for Communication at the University of Pennsylvania, Ellen participates in research projects and workshops. She taught “News Media and Political Power: Global Lessons from the American Experience” for the CEU Political Science Department in 2010. Before coming to CEU, Ellen was the Research Director at the Center for Future Civic Media in the Massachusetts Institute of Technology. Previously, she founded the Center on Media and Society at the University of Massachusetts Boston and the New England Ethnic Newswire. She also served as executive director and senior fellow at Harvard University's Shorenstein Center on the Press, Politics and Public Policy, and as executive director of PBS's Democracy Project, where she developed special news programs that encouraged citizen involvement in public affairs. Ellen was a White House and political correspondent for The Wall Street Journal, national reporter for the Los Angeles Times and regular commentator on PBS's Washington Week in Review and CNN's Reliable Sources programs.