Journalism in Myanmar: Back to the Dark Ages? 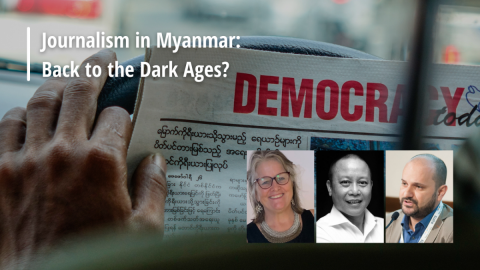 When the army made way for a new government in Myanmar ten years ago, ending decades of military rule that isolated the country, Burmese journalists were among the first to cheer. Many of them, living for years in exile, began to up sticks and move back home. They all hoped that, finally, Myanmar was going to open as democracy was dawning in the country.

Fast forward ten years and all you see are shattered hopes. Following a military coup in early February, the first against a civilian government since 1962, the army took back the power, replacing ministers and arresting Aung San Suu Kyi, the State Counsellor of Myanmar, a role akin to a head of government.

Political observers expect only the worst. That includes the future of the independent media.

Will the return of the army mean the return of the dark age for Myanmar’s journalism? Will journalists have to return to exile in order to do their job? What can journalists do to be able to report independently and what can others, international groups, donor organizations, foreign media, do to help?

Sonny Swe, CEO of Frontier Myanmar Weekly Magazine, and Jane McElhone, a journalism and media expert with a long experience in Myanmar and the region discussed these questions and many more in an event moderated by CMDS’ Director, Marius Dragomir.