Unnecessary and Disproportionate: The Imprisonment of Journalists on Trial in Turkey 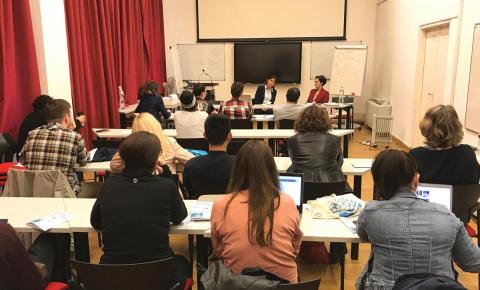 Given the unprecedented number of journalists in prison in Turkey, and the increasing number of freedom of expression trials, trial monitoring has become an important activity for Turkish and also international civil society organizations over the past few years. Turkey-based Media and Law Studies Association (MLSA) and the International Press Institute (IPI) have led a project, funded by the European Commission and the Friedrich Naumann Foundation, in which they observed 90 court sessions of 71 separate trials over a six-month period from July to December 2018 in ten different provinces in Turkey.

This project was the topic of the seminar “Freedom of Expression Trials in Turkey: Justice Monitoring to Secure Journalists’ Rights” at Central European University.

Hundreds of journalists, human rights defenders and academics face trial in Turkey, Sejal Parmar, Assistant Professor of Law at the Department of Legal Studies and a core faculty member of the Center for Media, Data and Society at the School of Public Policy at CEU, said in her introduction to the seminar. Attacks on the freedom of expression are common and systemic. Courts have ordered media blackouts or blocked websites. According to the official narrative, however, there are no journalists in prison, only terrorists.

What can freedom of expression fighters do in such an environment, asked Sejal Parmar, before introducing Barbara Trionfi, Executive Director at International Press Institute (IPI), a global network of editors, media executives and leading journalists dedicated to safeguarding and fostering media freedom and promoting quality, independent journalism.

Beginning her presentation Barbara Trionfi said that, even though IPI is a network with close to 2,000 members and with a strong presence in Turkey, the organization is “struggling to ensure improvements in respecting press freedom in Turkey”. The latest wave of attacks against press and media freedom  started before the attempted coup in July 2016, and IPI has observed an increasing takeover of news media outlets by people close to the president. After the attempted coup, the emergency decrees served as a legal foundation for the current crackdown.

Barbara Trionfi emphasized that there were journalists in prison before the attempted coup, around 30-40, mostly working for outlets close to the Kurdish community and accused by the government of supporting the Kurdistan Workers Party (PKK), labelled as a terrorist organization by Turkey. But the Turkish government blamed exiled preacher Fethullah Gülen and his movement for the coup, and media outlets purportedly close to the movement were shut down: their journalists were labelled as terrorists and imprisonments began.

Barbara Trionfi said that “the worst moment came” in October 2016, when journalists of Cumhuriyet were brought to prison. This outlet has never been pro-PKK or pro-Gülen; Cumhuriyet was considered to be close to CHP, the biggest opposition party. Targeting Cumhuriyet journalists meant that the government’s clamp down was directed not only against the purported organisers of the failed coup, but against anybody who dared to criticize it. Human rights activists have also become a target, including Amnesty International. Criminal charges were pressed against a large number of people. Approximately 170 news organizations were shut down. That nobody was able to prevent this is “one of the most frustrating aspect” commented Barbara Trionfi. 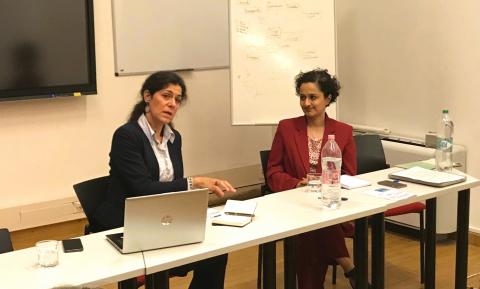 Currently there are over 140 journalists in prison many are still awaiting for trial on the basis of unclear charges and little evidence, including published articles and even tweets.  According to Trionfi: “There is no reason to keep them in prison, according to international standards in this area. Their imprisonment is therefore unnecessary and disproportionate.”

To make advocacy interventions, particularly at the European Court of Human Rights, more persuasive data on the nature and effectiveness of the Turkish justice system has been sought. IPI and MLSA therefore started a pilot project to collect data and evidence to show that courts are not sufficiently independent and journalists, in particular, do not have access to fair trials. The organizations cooperated with local associations across the country, not only in Istanbul, to train lawyers and court reporters to collect data as objectively as possible.

The vast majority of the defendants (78%) were journalists, but they also included lawyers, academics and artists. Overall, 72 percent of the criminal charges were for alleged terrorism offences, while the rest mainly related to alleged acts of defamation. The data collected in this project indicated that Turkish courts consistently ignored the Constitution and domestic legislation, as well as international treaties to which Turkey is a party and precedent-setting rulings from the European Court of Human Rights.

According to Barbara Trionfi, the biggest problems in the Turkish system were unlawful detentions, the length of pre-trial detentions, changes of judges without justification, and abuse of rights during the trial process (e.g. when a panel of judges discuss their decision with the prosecutor present during the discussion). In 49% of the sessions, defendants were tried whilst in detention. In 34% of the sessions, defendants in detentions were not brought physically to the court. Defense lawyers were often denied the floor or interrupted by judges.

As follow-up to the pilot project, IPI started a new project in April, which will last for one year and is funded by the European Commission.

In her response to questions Barbara Trionfi recognized that every state needs anti-terrorism laws, but pointed out that in Turkey these laws restrict freedom of expression to an extent which is not necessary or proportionate. Barbara Trionfi reminded the audience that greater freedom in the dissemination of ideas does not increase the danger of terrorism. She remarked “if you are allowed to express dissatisfaction through words, then it can reduce the danger”.

More information about the project: https://freeturkeyjournalists.ipi.media/