“I Would Really Appreciate If We Got Real Answers” 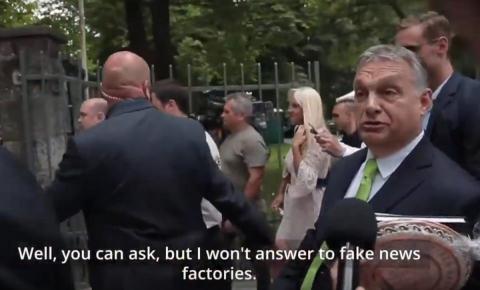 A short documentary produced by three students of Central European University shows the ongoing struggles of independent journalists in Hungary.

“You can ask, but I won’t answer to fake news factories.” The quote comes from Hungarian Prime Minister Viktor Orbán while his press officer and bodyguards are blocking the reporter’s way. This is how the short documentary Real Answers starts. Orbán refers to the Hungarian media outlet with the largest audience, Index.hu; he and members of his cabinet and party have regularly labelled other independent outlets as “fake news” as well.

Real Answers was produced by three students of the Central European University: Ajla Henic Sarajlic, Ádám Hushegyi and Endre Kuklin. It’s the story of two journalists, Blanka Zöldi and Katalin Erdélyi, who work for independent investigative outlets (Direkt36 and Átlátszó, respectively), and who have to face a hostile environment every day. This movie is the first project of the students ever; they haven’t done anything like this before.

“I was wondering what drives these people to do this kind of job, which is very dangerous and important at the same time, taken into consideration what happened in the past couple of years in Hungary, that these journalists had to face this propaganda campaign, that they are ‘Soros’s army’”, says Endre Kuklin about how they started thinking about the topic. “I think it is very important to have an insight into what happens when these types of governments reach power. Because we see it in Western countries as well, they are little by little conquering seats in parliaments”, adds Ajla Henic Sarajlic.

“We wanted to approach specifically Direkt36 and Átlátszó, who deliver stories in English as well. We were focusing mostly on the two teams rather than on specific people”, says Ádám Hushegyi. “We also had a discussion that it would be great to have female journalists, without ‘spoon-feeding’ the importance of this gender aspect of the story”, continues Endre. Ádám replies: “It is so interesting, that the Hungarian government has this hardcore conservative, intolerant and macho rhetoric, and it is interesting to think about these very driven female journalists who are everything but the world that the government represents.”

The producers actually found answers to the question what drives the journalists. “There is an inner force, they are very passionate about their work. You need to be in love to do this kind of work”, says Ajla. This is reinforced by Blanka Zöldi in the movie: “I feel we just cannot stop, because I don’t know what people would be left with”, she says.

However, independent journalists have to face more and more difficulties in Hungary: officials are not answering their questions, and, as Katalin Erdélyi says in the movie, “the people in power and those affiliated with them spew hatred at us. But I don’t care. It just shows we’re doing our job right”.

The documentary captures the dedication, courage and persistence it takes to conduct investigative journalism. Being a watchdog is tough everywhere, but the environment the Hungarian government has created is particularly hostile, says Éva Bognár, Senior Program Officer at Center for Media, Data and Society at CEU. Journalists face financial and administrative hurdles, they lack access to information in their work and are subject to online trolling, intimidation and smear campaigns by pro-government media. In the meantime, she adds, the public service media and media outlets owned by government allies have all the resources (state advertising, access to politicians, bank loans etc.), but do not operate as watchdogs, rather as channels for government messaging or propaganda. In this highly challenging environment where immediate impact of investigative journalism (such as legal or financial consequences of uncovered wrongdoings on those in power) is hard to come by, the mere documentation of corruption cases is vital.

Initial reactions on the documentary have all been positive. “The best part was that after the screening at CEU many people came to me and said that they had found the movie very informative and wanted to know more about these groups and about the articles of the journalists’”, says Endre. Ajla has even sent the movie to her friends in Spain. “And all the feedback was that we didn’t know about this”, she says.

The producers have some ideas to continue the documentary. As they say, they simply didn’t have enough time to reach out to any officials. Ádám would like to interview “someone very high up who could speak in the name of the Hungarian government”, but Endre adds immediately: “if they were willing to talk to us in the first place”.

This is what the journalists want to achieve as well. In the words of Blanka Zöldi: “I would really appreciate if we got real answers, and not just putting a stamp on us.”