Marius Dragomir Appointed Director of the Center for Media, Data and Society 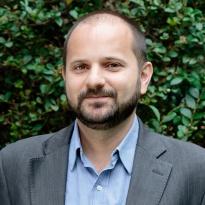 The Center for Media, Data and Society (CMDS) at the School of Public Policy of Central European University is delighted to announce the appointment of Marius Dragomir as Center Director.

Dragomir comes to SPP from the Open Society Foundations (OSF) where he has worked for over a decade. Since 2007, he has managed the research and policy portfolio of the Program on Independent Journalism (PIJ), formerly the Network Media Program (NMP), in London. He has also been one of the main editors for PIJ's flagship research and advocacy project, Mapping Digital Media, which covered 56 countries worldwide, and he was the main writer and editor of OSF’s Television Across Europe, a comparative study of broadcast policies in 20 European countries.

Dragomir has spent the past decade in the media research field, specializing in media and communication regulation, digital media, governing structures of public service media and broadcasting, spectrum management, and ownership regulation. He has authored expert studies and articles on journalism and media policies that have been published and translated in more than 60 countries.

Dragomir started his career as a journalist some 25 years ago in his native Romania where he worked for several local dailies, radio, and TV stations. Since 1999, he has been working for English-language media. Last year, with a group of journalists and researchers, he cofounded Mediapowermonitor.com, a community of experts in media policy covering trends in regulation, business, and politics that influence journalism.

“I am truly excited to join CMDS, known for its longstanding contribution to the field of media and communication research, and work with its team and networks on bringing to life new and relevant research projects and ideas. In today’s rapidly evolving media and communication environment, progressive policies and informed debates are needed more than ever to protect freedom of expression, independent journalism, and free access to information,” he said. “Building on the strength of the Center's reputation, I want CMDS to continue to play a significant role in these debates by offering fact-based evidence to improve policymaking and support civil society, journalists, and activists.”

Dragomir said he seeks to strengthen and develop ties with journalists and practitioners from the media field. His goal is to further grow the Center by launching more research projects and building new partnerships with think tanks, research institutions, and journalistic networks.

Commenting on the appointment, Acting Dean of SPP Julia Buxton said, “The wealth of experience, networks, knowledge, and expertise that Marius brings to the Center - and to the School more broadly – will enable us to diversify and expand the Center’s already significant profile and reputation.” Buxton also thanked Eva Bognar for the invaluable role she has played in the past year as acting director of CMDS.

The Center for Media, Data and Society (CMDS) at the School of Public Policy of CEU is a research center for the study of media, communication, and information policy and its impact on society and practice. Founded in 2004 as the Center for Media and Communication Studies, CMDS serves as a focal point for an international network of acclaimed scholars, research institutions, and activists. CMDS projects and research focus on: civil society and technology; digital rights, privacy and data protection; European media and journalism; media and transition in Central and Eastern Europe with a focus on Hungary; community media and development; and freedom of expression and human rights. CMDS produces scholarly and practice-oriented research addressing academic, policy, and civil society needs; and provides trainings and organizes workshops, lectures, and conferences on current developments in the field. CMDS researchers also offer courses at CEU. CMDS organizes an annual intensive summer course addressing topics of internet policy advocacy and freedom of expression.

If you are interested in getting involved with the Center and our research opportunities, please visit our website at www.cmds.ceu.edu or write to cmds@ceu.edu