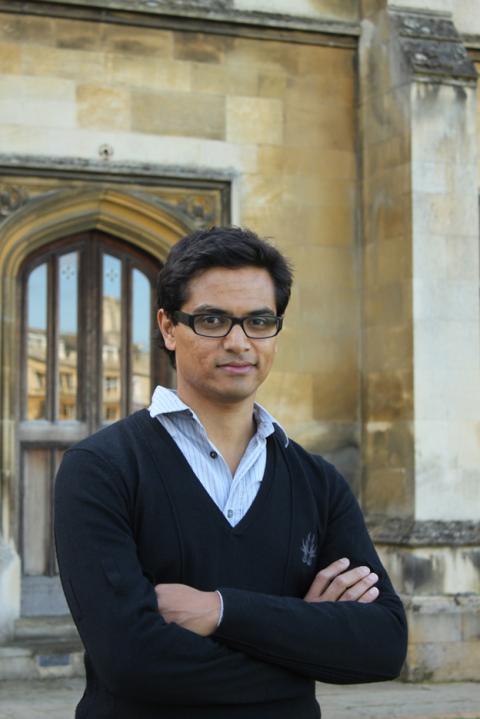 During a public lecture hosted by CMDS on March 19, Sharath Srinivasan took both an empirical and theoretical approach to explore how digital technology is both facilitating and, he argued, “displacing the motivation to participate in politics and take action.”

Srinivasan directs Cambridge University’s multidisciplinary Centre of Governance and Human Rights and is David and Elaine Potter Lecturer in the Department of Politics and International Studies. In his presentation, he shared some interesting data from his research project, Politics and Interactive Media in Africa, and Africa’s Voices, a grassroots initiative in East Africa that stimulates interactive discussions and gathers and analyzes data from radio stations to explore people’s opinions on social and political issues. He noted that radio remains the dominant way that people access information in East Africa. There have been some recent changes though. Twenty to thirty years ago, broadcast media was mostly one-way and monopolized. It is much more diverse and interactive now thanks to mobile telephony and digital media.

Srinivasan noted that although there are many more opportunities to engage with radio shows, many listeners do not: there is a big difference between rates of listenership and rates of participation. Those who choose to participate are not typical listeners. Those who engage with broadcast media are more likely to be male, more educated, and have above average incomes. Although the rise of digital technologies, especially the mobile phone, makes it possible to create social spaces in new and interesting ways, many feel discouraged from participating. It is a space for them to listen but not have a voice. Yet, because listenership is so vast, these shows do have influence. Srinivasan explained that the way shows are convened as social spaces “matters a lot”. With Africa’s Voices, Srinivasan and his colleagues are designing analytic tools to tap into these important spaces of discussion and capture trends in public opinion.

The rise of digital technologies has changed how the individual interacts with the external world. The individual today has much more ability to interact, but less control over what happens with their information. As Srinivasan noted, the dominant concerns about the emergence of the digital society today are state uses (security) and capital (profit). He suggested that there were other concerns that we should be looking at too: “We need to focus on how the digital affects politics.”

Srinivasan explained that it is by coming together and speaking and acting that we create our shared world. In a world in which digital technologies shaped by commercial interests dominate, simply interacting and ‘sharing’ takes precedence over exercising judgment. Also “analog, non-networked voices” are inevitably devalued and ignored. “The digital world we are creating takes up the space of in-betweenness, where politics can occur,” he said. We have to create new digital possibilities for meaningful politics. For Srinivasan, this means fostering and valuing voices on interactive radio shows in Africa. “If we leave politics to transient networks and issues, is that enough?” he asked.