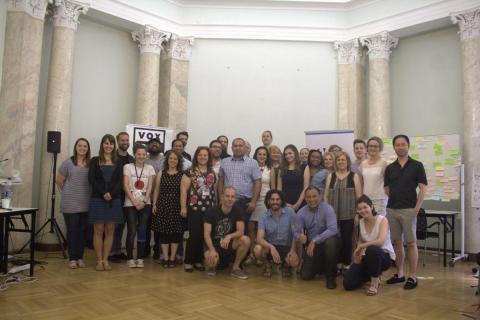 This year, CMDS hosted the 2nd VOX-Pol summer course entitled „Topics in Violent Online Political Extremism”, which was held at CEU July 4-8, 2016 and was attended by 25 participants from 19 countries across the globe. The program was run as part of the VOX-Pol Network of Excellence, a European Union Framework Programme 7 (FP7) funded academic research network focused on researching the prevalence, contours, functions, and impacts of violent online political extremism and responses.  Like previous summer courses organized and hosted by CMDS, this year’s summer school was organized in cooperation with the CEU SUN office, whose colleagues provided invaluable support and assistance. For more from course participants, please see our twitter hashtag #voxpolsumrschl and Storify piece here.

This year’s course was directed by Kate Coyer, director of CMDS’ civil society and technology project, Eva Bognar, CMDS’ acting executive director, and Maura Conway, Principal Investigator of the VOX-Pol project and aimed to provide PhD students, post-doctoral researchers, civil society representatives, policymakers and policy advocates, and media professionals with an introduction to the role of the internet in contemporary violent political extremism(s) and a range of critical debates around internet governance and security policy. As Kate Coyer said: “We are very proud of our long standing collaborations with CEU’s SUN office, and this year was an exciting opportunity for us to bring the VOX-Pol summer course to CEU and Budapest as part of the Summer University program. We had a very strong and competitive pool of applicants for limited spaces that we attribute to the combined strength and outreach of the VOX-Pol network, CEU Summer University program, and CMDS.”

The participants’ backgrounds reflected diversity both in terms of their geographical background and their professional expertise regarding violent online political extremism. Fifteen universities and research institutes were represented, in addition to other institutions and NGOs, and the participants’ professional backgrounds ranged from doctoral students to post-doctoral researchers, civil society advocates, journalists and media professionals to legal experts dealing with violent online political extremism.

The summer school was composed of five eight-hour days of lectures and hands-on sessions, presented and delivered by member researchers of VOX-Pol and invited guests whose work focuses on violent online political extremism and freedom of expression. Altogether 15faculty members delivered 16 different sessions throughout the week, and Jillian C. York also gave the summer school’s keynote lecture on freedom of expression and safety online. 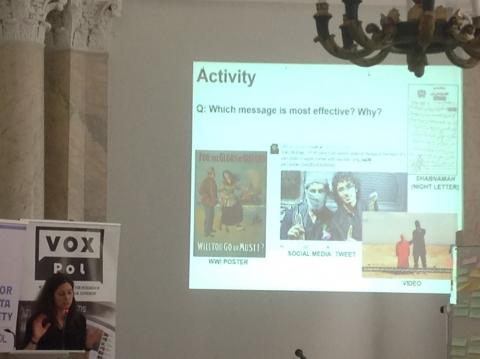 The summer school kicked-off with an introductory session, followed by Christina Archetti’s (University of Oslo) lecture on the media perspective of countering violent online political extremism entitled “Extremism, Communication and the Media: Seeing Through the Hype”. The afternoon continued with Rajan Basra’s (King’s College London) lecture entitled “Critiquing the Discourse of Violent Online Radicalisation”, and Sejal Parmar (Central European University, Department of Legal Studies) concluded the first day of the summer school by providing an overview of the legal frame of freedom of expression online, human rights law and violent extremism. 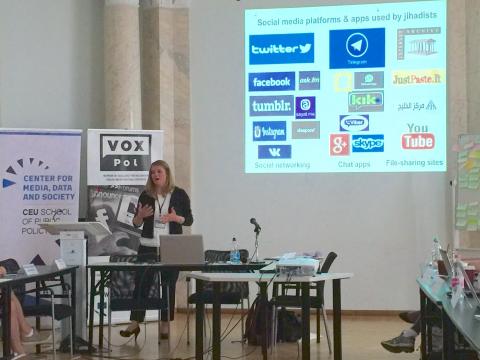 The morning of the second day was dedicated to Mina al-Lami’s sessions on the professional media operations of ISIS. Mina al-Lami is a jihadist media expert at BBC Monitoring, and she has nearly a decade of experience researching, analysing and writing on the media operations and online communications and platforms of jihadist groups. After lunch, Paul Gill, a senior lecturer in security and crime science at the University of College London, delivered his lectures, first on lone actors and the internet, then on online radicalization by the numbers.

The third day of the workshop began with Manuela Caiani’s (Scuola Normale Superiore) comparative presentation of extreme right organizations and online politics in Europe and the USA, followed by Political Capital’s political analyst Bulcsú Hunyadi’s session on the state of the far-right and their online presence in Hungary, as a regional addition to Caiani’s lecture. The afternoon continued with a field trip to the Blinken Open Society Archives, the archival laboratory of Central European University.

The summer school’s keynote lecture featured Jillian C. York, director for International Freedom of Expression at the Electronic Frontier Foundation. She spoke about the state of freedom of expression and safety online, discussing whether it is possible to guarantee users online safety while also guaranteeing the right to freedom of expression, and if there are limits to be placed on speech, who takes decisions in these matters.

The fourth day of the summer school focused on intermediary responsibility and social media companies’ role in responding to online extremism. The first session was held by Dia Kayyali (Electronic Frontier Foundation), who discussed the mechanics of content removal and Internet censorship. Non-resident CMDS fellow Lina Dencik (Cardiff University) presented her research on policing protest via social media and big data analytics. In the afternoon, Kate Coyer and Jillian C. York facilitated a hands-on discussion of the roles social media companies play in responding to online extremism and why that matters, including how this impacts the future of freedom of expression online. 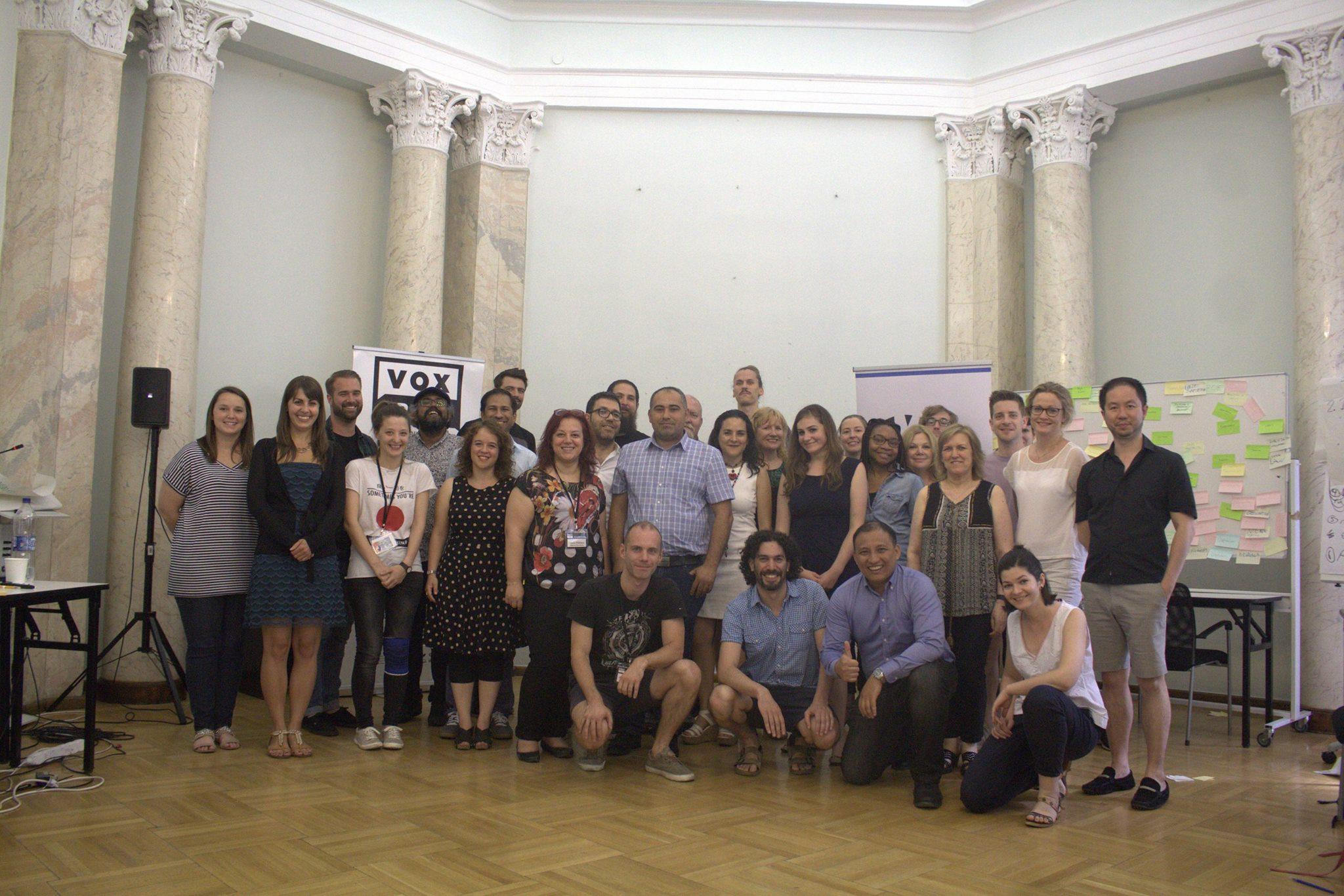 The closing day began with the joint presentation of Mohamed Najem (Social Media Exchange) and Ross Frenett (Moonshot CVE) about grassroots initiatives and their success in countering violent online extremism online. Lisa McInerney (Dublin City University) also spoke about her work around countering extremism. Their presentations were followed by Jim Killock’s (Open Rights Group) overview of the current state of surveillance and online privacy. The summer school ended with a group discussion on the changing role of the state vis a vis the private sector, the challenges for countering violent online political extremism and different global responses to it, and how we as researchers can and should play a role both methodologically and practically.