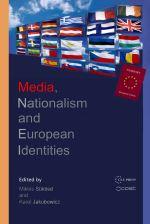 In April 2011, CEU Press and the CMCS published the latest of a series of books that resulted from the collaborative research network East of West: Setting a New Central and Eastern European Media Research Agenda (2005-2009), coordinated by the CMCS and funded as a European COST initiative by the European Science Foundation.

Media, Nationalism and European Identities, edited by Miklos Sukosd and Karol Jakubowicz, explores patterns of interaction between the mass media and identity formation in the context of Europeanization. On the one hand, the major contribution of the volume is a comprehensive framework that considers media impacts on four levels of identity: European, regional, national, and ethnic minority identities. On the other hand, authors offer cutting edge analysis of the structural transformation of European media institutions, and policies that shape the future of European media.