Over the past years, the Hungarian pro-Russian government gained control over both the mainstream and alternative media. Since 2015 a domestic network of trolls, fake profiles, and Facebook sites has spread disinformation in Hungary, mostly coming from the Kremlin. This well-built system includes fake news, manipulated images and videos, and hateful speech to generate anger. And of course, the focus is on refugees. These media want to show that immigrants are violent and brutal. In this paper, I will present some of the methods that have been used in Hungary to spread fake news widely.

During the European Parliamentary elections campaign in Europe, many political parties were focusing on immigration and refugees, depicting them in a very negative light for their electorate. The latest research of Hungarian policy research institute Political Capital shows that in three eastern-European countries, Slovakia, the Czech Republic, and Hungary, government-friendly media outlets spread Russian propaganda on social media. According to the research, the most disinformation during the elections campaign was spread in Hungary among EU member states. The reason for this is that the anti-immigrant government of Viktor Orbán controls most of the mainstream and alternative media in Hungary, and both spread fake news.

In Hungary, pro-government Facebook sites attract a relatively large audience. One of the most popular pro-government propaganda sites on Facebook in Hungary is called ELÉG (“enough” in Hungarian), with 147,242 Facebook followers in May 2019. This is a huge number, considering the relatively small population (9.8 million) of Hungary. It is important to keep in mind that sites such as ELÉG often have a reach comparable to that of some traditional media.

The ELÉG site contains strong language, hateful texts and refers many times to non-existent events. One can easily categorize this troll-like media machine’s posts under five categories. It either posts manipulated pictures of refugees, targets opposition parties, makes some claim about George Soros and his network, emphasizes the Christian roots of Europe in a very aggressive manner, or shames some European politicians (for instance, it claims French President Macron is homosexual, European Commission President Jean-Claude Juncker is alcoholic). It is very important to note that this page is not an isolated example; the tactics used here are rather common. This is important because these sites may influence Hungarians’ voting behavior. 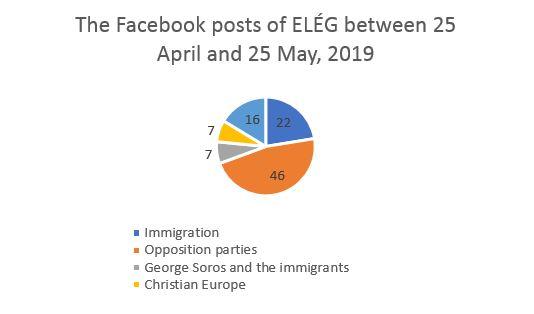 ELÉG was one of the Facebook pages in Hungary that amplified a lie originating from Russian RT on the oppression of Christianity in Europe in April 2019. 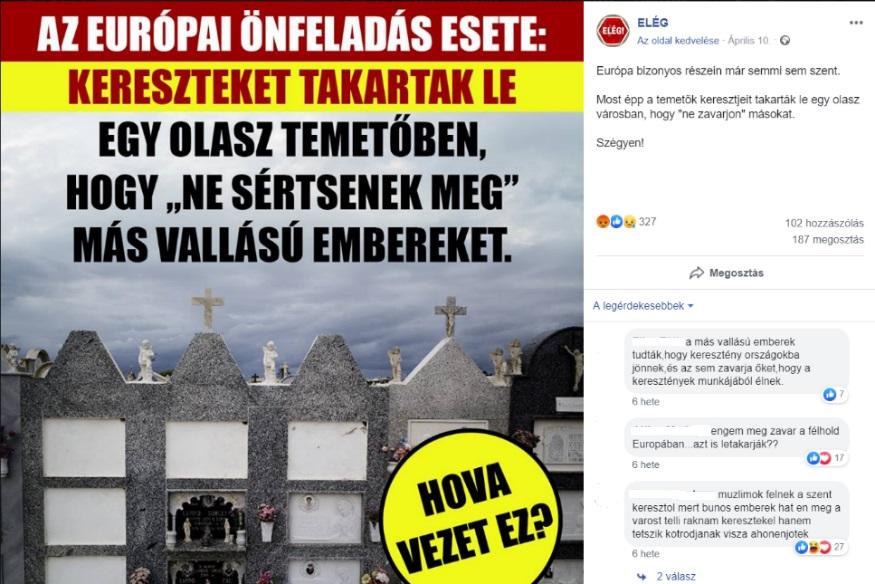 “Europe gives herself up: Crosses are veiled in an Italian cemetery to ‘avoid offending’ other religions”

During Lent this year, RT started to spread the “news” online that in Italy crosses and crucifixes were veiled in order not to offend other religions. This “bombshell” was used to spread hate against the Muslim communities in Europe. This “news” made it to the alternative as well as the mainstream media in many countries. People were furious, and many of them were concerned about the situation of Christianity in Europe. However, veiling the crosses during Lent is a Catholic Christian tradition, to focus on the penitential aspect of Lent. This example shows how the truth is distorted to spread hatred. 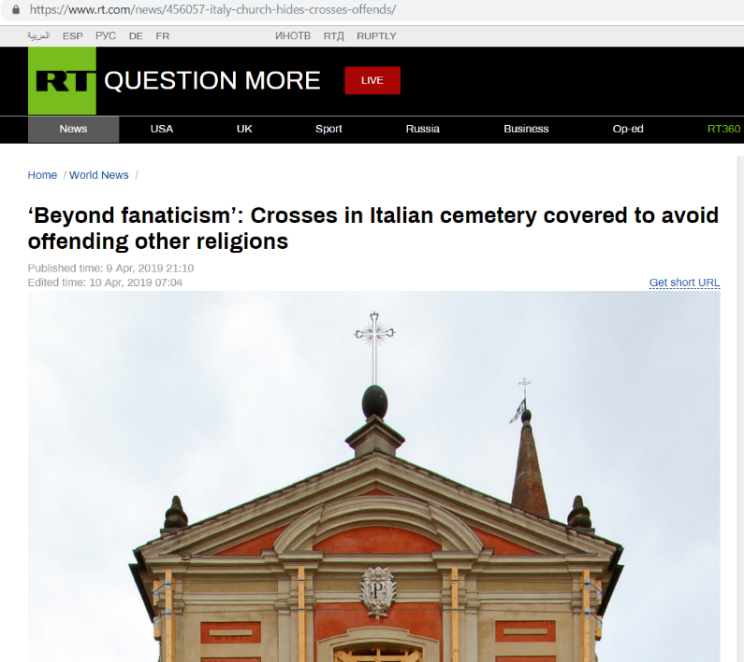 RT’s report on the veiling of the crosses

While the post above by ELÉG does not refer to RT as the source of the news, these Facebook pages often do. For example, another alternative media outlet called Világhelyzete.com (“the situation of the world”) often shares articles by RT.com on Facebook. In the post below, Világhelyzete.com shared RT’s piece on the expected success of anti-immigrant, Eurosceptic parties in Europe at the European elections. (Though Világhelyzete.com has its own website, they can reach more people on social media, therefore I decided to focus on their Facebook platform.) 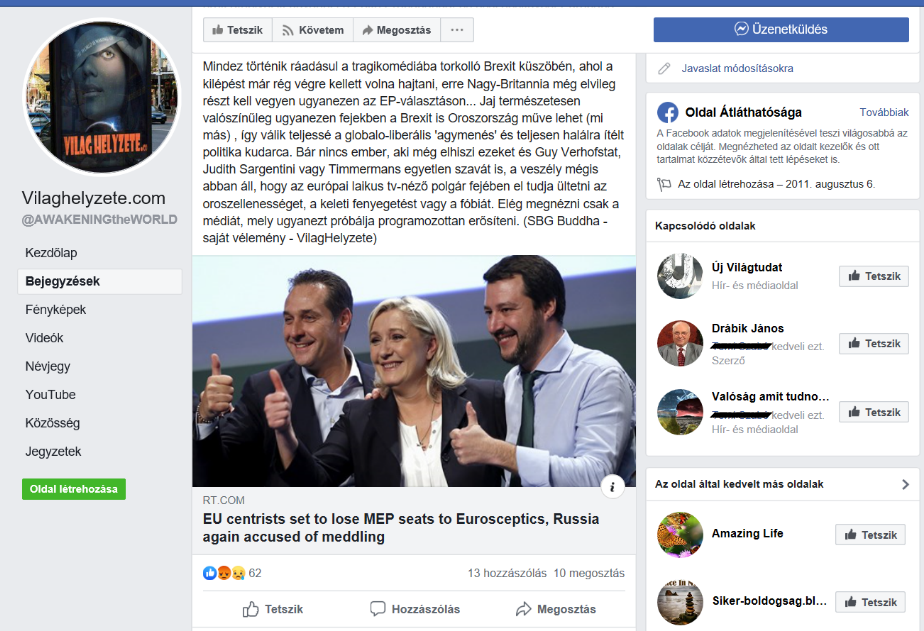 Worries about Europe “losing its Christian identity” often comes up on sites like ELÉG. For example, Patrióta Európa Mozgalom (“Patriotic Europe Movement), yet another pro-government propaganda site, shared the following post on 28 May, after the EP elections: 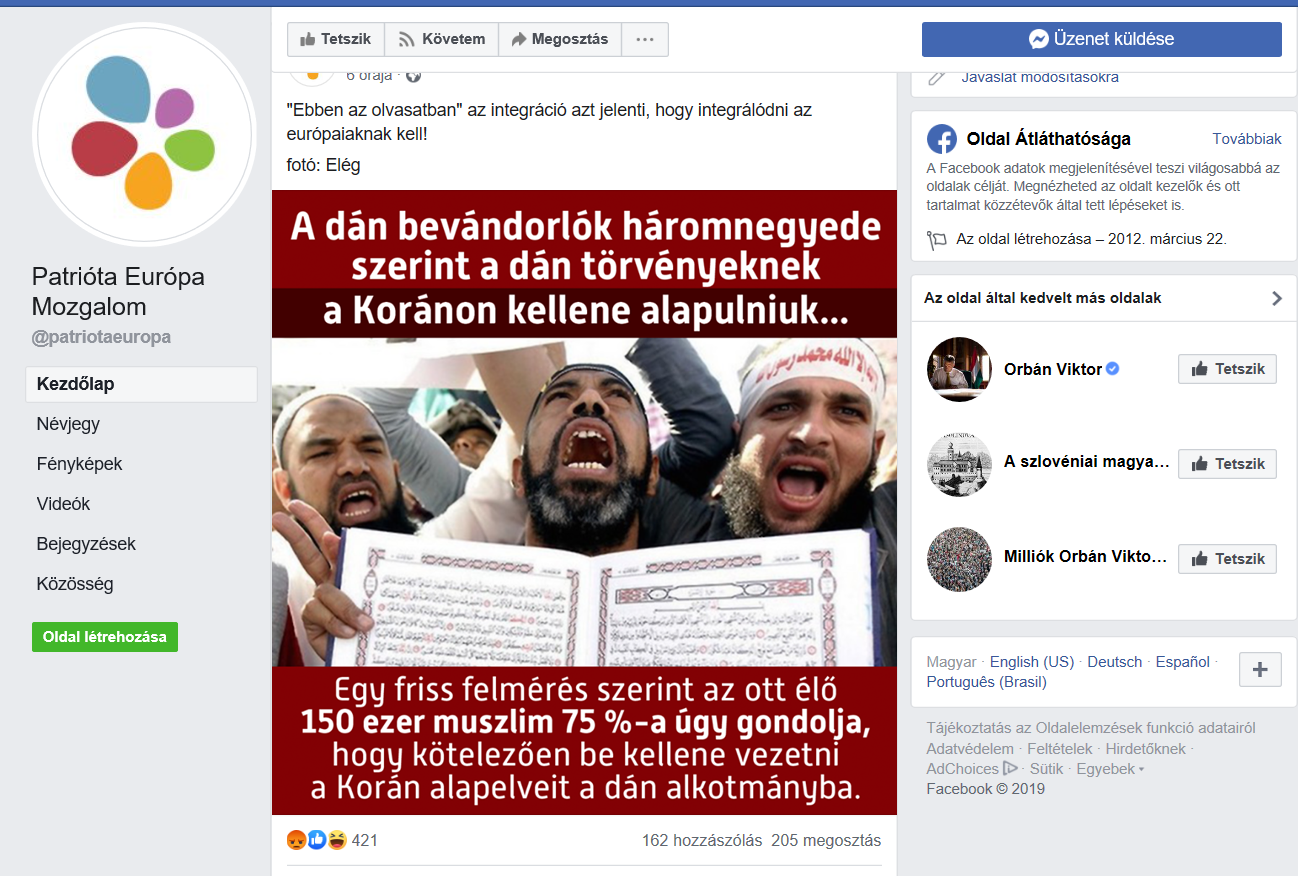 The image shows three very frightening men, holding the Koran with the following text: “Three-quarters of Danish immigrants say that Danish law should be based on the Koran… A fresh survey shows that 75 percent of the 150 thousand Muslims who live in Denmark say that the principles of the Koran should be integrated into the Danish constitution.” A five-minute fact-check can show us that this Danish survey doesn’t exist. This method is common on these sites: they often refer to non-existent surveys and made-up incidents that depict immigrants in a bad light; in fact, this is their goal. The screencap above also shows that the Facebook algorithm recommends Viktor Orbán’s official page, and a fan site called Millions for Viktor Orbán as similar pages to Patrióta Európa Mozgalom. The picture in this post was made by ELÉG, exemplifying how these “news” spread on social media. In fact, a 2018 media investigation found that Fidesz’ centrally run network of trolls, members of which are called “Virtual Colleagues”, are often tasked with sharing on ELÉG posts. Furthermore, and also proving just how Fidesz aims to control social media, ELÉG’s contact information on Facebook is the official Fidesz email-address, kapcsolat@fidesz.hu. (Yet this is not a definitive proof of connection because as news portal Index.hu recently found, the contact details on several Hungarian Facebook pages are either hacked or subject to a bug).

Beyond religious identity, these sites often express concern that Europe is being changed by the influx of immigrants, which “the left allows to happen.” The following post was shared by ELÉG: 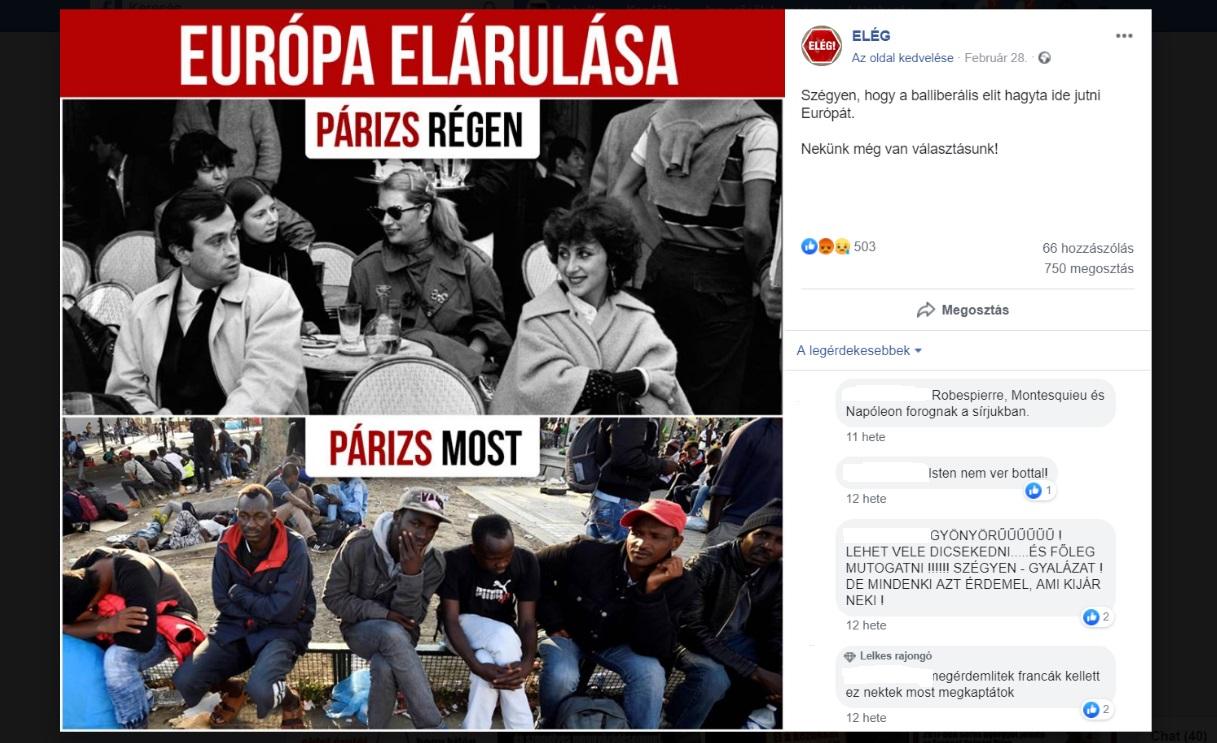 The Betrayal of Europe: Paris then, Paris now

The picture in the bottom has a very mysterious journey on the internet. It was, indeed, taken in Paris, France, as the sign states, but back in July 2017. As I did my research for this picture, I found Italian and Spanish fake news sites using this image as late as in 2019. These media outlets want to show their readers the chaos caused by refugees in Paris, showing that refugees live on the streets. But the truth is that these people have been gathered because the city of Paris evicted a migrant camp. The picture was taken in 2017, but the post was made by ELÉG in February 2019, suggesting that it was a recent image of Paris. During the research, I found three different articles from the same Hungarian tabloid Ripost using this picture claiming the people shown are refugees. The first article says the picture was taken in Calais, the second says Italy, and only the third says correctly that these people were in Paris when the photo was taken. Yet not even this piece mentions the eviction.

The tabloid Ripost also exemplifies mainstream Hungarian media spreading fake news. An issue about which disinformation is widely spread by both mainstream and alternative propaganda sites is the so-called “migrant card.” The government and its media claim that the EU and the United Nations give anonymous credit cards to migrants, and with this money, they can buy tools to attack the borders. According to the propaganda sites, they can also use this money to pay human traffickers. In reality, these prepaid debit cards are only given to refugees who have been screened, and only within the borders of Greece. The amount given ranges between €90 and €550 a month, depending on family size and whether food is provided for them. The UN saves money with this scheme, and refugees can buy the food for themselves locally. This way, no aid gets wasted and local Greek businesses are supported. Despite that, the government and its media tell Hungarians that huge amounts are transferred to these cards. It was reported, for instance, that Hungarian-born US billionaire George Soros gave 500 million euros to be spent on the scheme. The propaganda media claim that the EU wants to destabilize Europe through means like this.

"How many terrorists got migrant cards from Brussels?", published by Origo, 31 March 2019

Origo is one of the most popular mainstream pro-government media outlets. It was established as an independent, high-quality online newspaper, but in 2017 a government-friendly oligarch bought it and turned it to a propaganda machine.

Propaganda about refugees is spread not only via reading materials but perhaps even more importantly by videos. YouTube is the perfect platform for manipulated videos on refugees. A Hungarian channel called Világ Figyelő HírMagazin (“World Observer NewsMagazine”) has more than 6,000 subscribers and more than 4,3 million views. The uploaded videos are on alleged Muslim terror attacks and immigrants. The videos are mostly taken from the Hungarian public service television, in addition to a few “raw” footages shot with cell phones. When I analysed the videos, I often ended up on Russian websites. A sibling of this Hungarian YouTube channel called Világ Figyelő Magyar Hírek (“World Observer Hungarian News”) even has its social media platform on Russian social media site VK. When attempting to verify the origin of a manipulated video on the YouTube channel, (the video turned out to be fake), I searched for the frames, which led me to a Russian fake news website, a screencap of which is shown below. This website incites hatred against refugees, as clearly shown by the title which translates as, “Terrorists silently executed hostages in the Parisian theater. Police officers who stormed the building report a hundred dead [video, updated]). 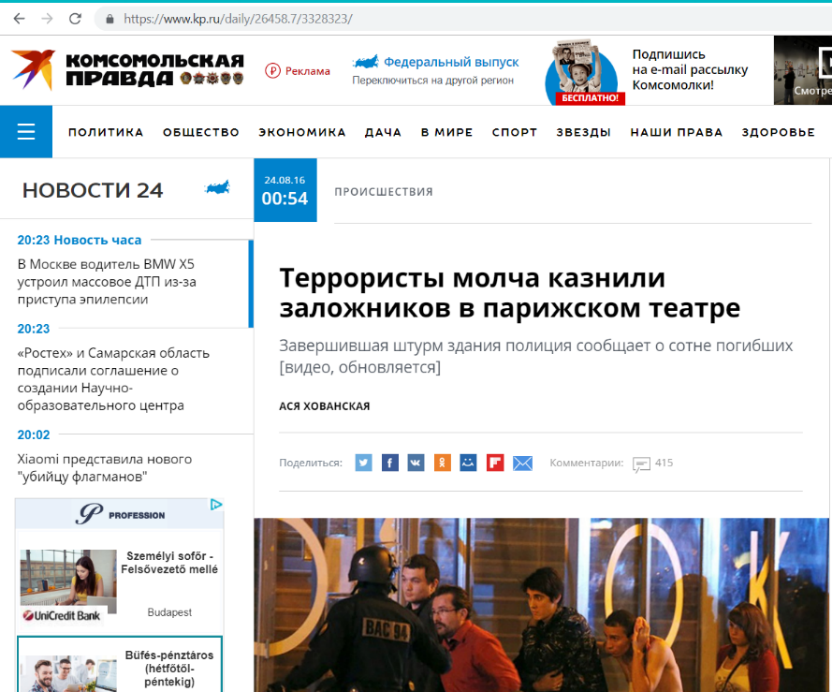 Another video on Világ Figyelő’s channel from 4 April 2019 is taken from the Hungarian public service television, claiming that migrants want to tear down the fence on the Greek border. The title states: “They (migrants) have already shaken the fence; they can start going to the border any time now.” The television channel claims this is a well-coordinated operation. The report uses the word “caravan” multiple times, taken from US President Donald Trump. When trying to verify the video, it turned out to be manipulated.

In the past few years, there have been some examples of extreme disinformation coming from figures close to the Hungarian government. Two years ago, one of the most popular, controversial pro-government publicists, Zsolt Bayer posted a video on his own blog that showed three men beating a fourth man until he collapsed. Bayer claimed the people on the video were migrants in Europe. It turned out later that the video was shot in Latin-America in 2015. More recently, the troll network of the government spread a video of an immigrant man urinating into the subway of Paris. However, the upper right corner of the video had a map of the New York City subway. It turned out the video was shot for a campaign for a cleaner subway for the city administration of New York. Another outrageous example is Origo running a CCTV footage from the US, showing some young men beating an elderly woman. Origo added the sound of bombs exploding and people shouting “Allahu akbar” to the video. The goal was to convince viewers that this happened in Europe.

The examples discussed here are just the tip of the iceberg. The Hungarian social media landscape is dominated by pro-government propaganda sites. Hungarian ruling party Fidesz’ landslide victory in the 2018 general elections is likely partly due to the irrational fear and hatred towards refugees, fueled by the media – even though the refugee crisis has been over since 2017.