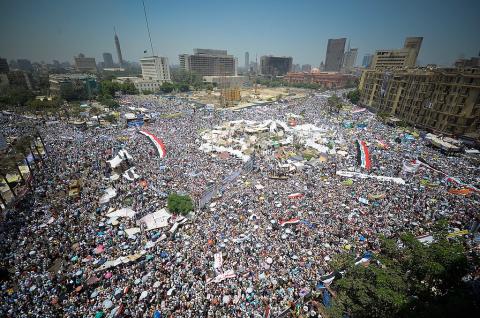 In an episode of the New Arab Voice Podcast, CMDS Fellow Courtney Radsch discussed how citizen journalists took advantage of the unpreparedness of the regime in Egypt before the 2011 uprising.

The episode features two examples of changing press freedom in the Middle East: Egypt and Tunisia. Courtney Radsch was invited to talk about the rise of citizen journalism in Egypt and the subsequent clampdown by the government.

When the internet and social media started to spread in the region, “we saw that it was citizen journalists who were really innovative in using these tools to connect with a wider public in the world and also to do a new type of journalism in Egypt,” she said.

The legal framework in Egypt was unprepared for citizen journalism.

“What we saw in advance of 2011 is that the legal frameworks in Egypt didn’t really envision what the internet was going to become. A lot of crimes that were criminalized offline were less criminalized online. So there was actually greater space for freedom of expression and innovations like citizen journalism online, because they didn’t yet have the legal framework set up,” she said.

The situation today is fundamentally different, she explained. "The advantage citizen journalists had has completely turned around.” Today, Egyptian society faces massive repression online and offline, pervasive surveillance, and sophisticated tools used by the government to surveille and track citizens. There is no space left for independent journalism, she said.