Reuters Digital News Report 2022: Depressing agenda is leading many people to turn away from the news as younger audiences lean further into TikTok 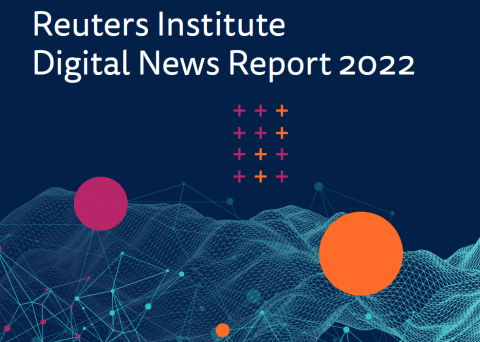 This year's Report provides evidence that much of the public is turning away from important stories such as the pandemic, Russia’s invasion of Ukraine, and the cost-of-living crisis. The report, based on an online survey of 93,432 people in 46 countries, documents ways in which the connection between journalism and much of the public may be fraying. The chapter on Hungary was written by CMDS Senior Program Officer and Researcher Éva Bognár.

SELECTIVE NEWS AVOIDANCE ON THE RISE

While the majority of people, across countries, remain engaged and use the news regularly, many others are choosing to limit their exposure to certain types of news. Overall, almost four in ten (38%) say they often or sometimes avoid the news – up from 29% in 2017. Avoiders have doubled in Brazil (54%) and the UK (46%) over five years.

Across markets, many news avoiders say they are put off by the repetitiveness of the news agenda – especially around politics and COVID-19 (43%). Around 36% – particularly those under 35 – say that the news brings down their mood. Others say the news leads to arguments they’d rather avoid (17%) or leads to feelings of powerlessness (16%). A significant proportion of younger people say they avoid news because it can be hard to follow.

Trust in news has fallen in almost half the countries in our survey, and risen in just seven, partly reversing the gains made at the pandemic. On average, 42% say they trust most news most of the time. Finland remains the country with the highest levels of overall trust (69%), while the US has the lowest score (26%, -3) of all 46 countries, along with Slovakia. 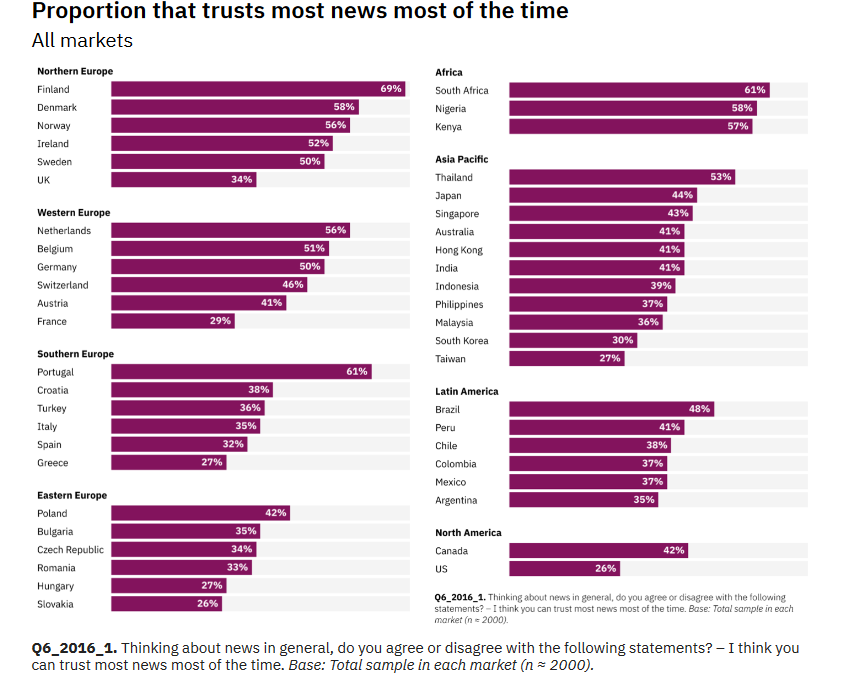 Despite significant increases in the proportion paying for online news in a handful of richer countries such as Australia (+5 points), Germany (+5) and Sweden (+3), there are signs that overall growth may be levelling off. Across a basket of 20 countries where payment is widespread, 17% paid for any online news, the same figure as last year. A large proportion of digital subscriptions go to a few national brands. Just 5% of subscribers pay for a local title in the UK and 3% in Portugal, but the figure is much higher in Norway (53%) and Sweden (43%). Subscribers tend to be richer, older and better educated, and tend to pay for just one publication. 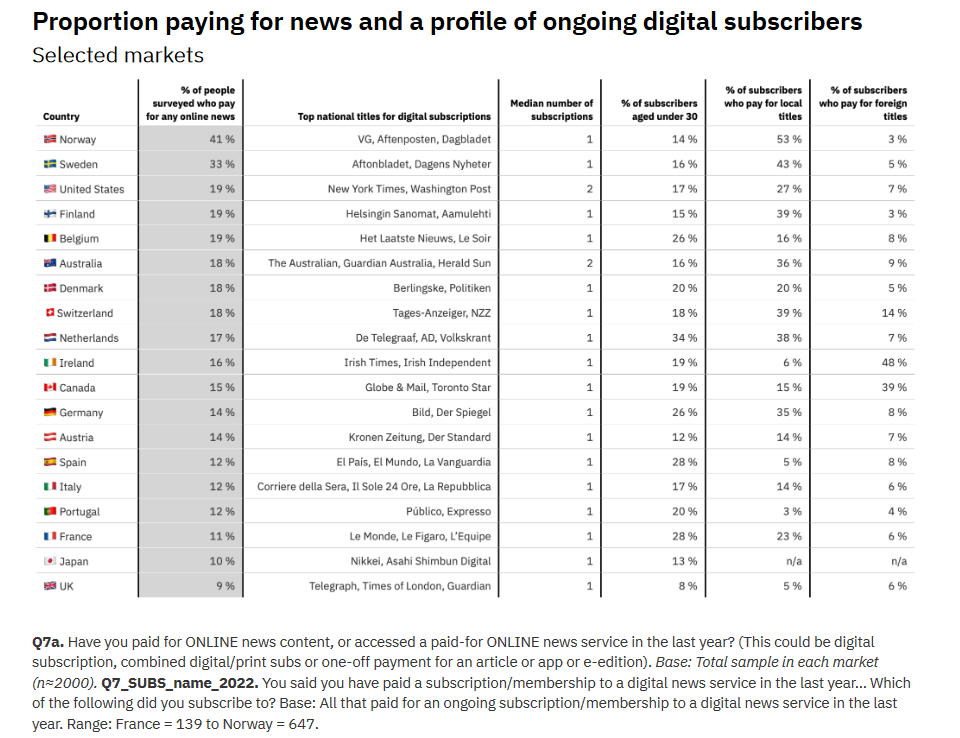 Despite the growth of low-cost subscription and membership platforms, like Substack and Patreon – and the much reported success of some individual writers – our survey finds
that the number of these subscriptions is still relatively modest, when compared with established news brands.

Concern about subscription diets in face of rising household bills

The report finds some respondents rethinking the number of media subscriptions they can afford this year – which often includes multiple TV and film services like Netflix, as well as music, sports and books. While most say they expect to retain the same total number of subscriptions, around one in seven in the United States (14%) and Portugal (17%) say they expect to have fewer, as they look to save money on non-essential items.

While many upmarket news providers have seen great success in building digital subscription businesses, it is not a model that will work for every publisher. A growing number of outlets are chasing the relatively small number of people prepared to pay for online news and local news struggle to build a critical mass of subscribers. Most fundamentally, much of the public – including people who happily subscribe to online video or music streaming services – do not find news worth paying for. It is therefore critically important, especially for those who believe journalism needs to serve the whole public, to think about how they can create a more compelling offer for a wider public and look beyond subscription-based models that primarily serve more privileged people.

Young people and the news

A theme that runs through this year’s report is the difficulty in engaging younger users with news. The report identifies a group of under 25s who have grown up with social media, whose behaviours and attitudes are not just different but more different than they were in the past. This group of ‘social natives’ define news in a different way, are less interested in traditional subjects like politics and have a weaker connection with news brands. Eight-in-ten (78%) of 18-24s access news via side door routes such as aggregators, search engines and social media each week.

The report also finds that these young ‘social natives’ have been switching allegiance away from Facebook towards visual networks like Instagram and TikTok, where entertainment and social influencers play a bigger role. Across all countries, 40% of 18-24s use TikTok each week, with 15% saying they use it to find, discuss or share news. Usage for news has doubled in some countries and is higher in parts of Latin America, Asia and Africa than it is in the United States, Northern Europe or Australia. Telegram has also grown significantly in markets such as Singapore, Italy, India, Kenya, providing an alternative to Meta-owned WhatsApp.

Impact of the war in Ukraine

The report includes results of a follow-up survey, using the same methodology, conducted roughly one month after the start of the war in Ukraine in five countries: UK, US, Poland, Germany and Brazil. This showed that television news was usually relied on most heavily
– especially in countries closest to the fighting, such as Germany and Poland. This is in line with previous research showing that people tend to turn to TV news at times of crisis.

However, the brutal nature of the conflict also seems to have contributed to significant increases in selective news avoidance in Germany (+7 points compared to pre-conflict levels), and Poland (+6) as well as in the United States (+4). Nearly half or more of respondents in all five countries agree that the news media is doing a good job in keeping people up to date on the latest news, but fewer respondents feel they are performing quite as well in explaining the wider implications of the conflict or providing a different range of perspectives on it. Although there may have been a surge in news use at the outbreak of the conflict (and at certain key moments), our data suggests overall news use hasn’t substantially increased since the war began.

The chapter on Hungary was written by our senior program officer and researcher Éva Bognár. It shows that as in the previous years, the most HVG and RTL Klub remain the most trusted news brands, with Telex ranked third. The public television is one of the least trusted brands.

Interestingly, TV as a news source in Hungary dropped and was overtaken by social media. Yet among the traditional media outlets, RTL Klub was used by far by the most respondents for news in the week of the survey, followed by TV2 and ATV. The public television used to rank fourth, but now Retro Rádió Hírtv and Rádió 1 have all been used by more people. HVG is the highest print media outlet on the list, ranked eighth. Online, Index was the most used news source in the survey, followed by 24.hu, 444 and Origo.

The owner of 24.hu, Zoltan Varga (Central Group), was targeted by Pegasus surveillance, an illustration of the severe pressures on independent journalism, Éva Bognár points out in the summary on Hungary. She lists the Pegasus scandal, the “child protection” law and the silencing of Klubrádió as the most important developments in the year. Among the positive developments, she discusses the success story of Partizán, Márton Gulyás’ online television channel, which was used by 8% of the respondents in the survey, “an enormous achievement for a new, online-only channel funded solely by individual donations from supporters along with some grants.”

Just as elsewhere, trust in news fell again in Hungary, which is again one of the countries with the lowest score, with only 27% of respondents trusting the news most of them time. In a similar way, only 15% of Hungarian respondents find the media free from undue political and business influence.

Other findings from the 2022 report

On misinformation. Global concerns about false and misleading information remain stable this year, ranging from 72% in Kenya and Nigeria to just 32% in Germany and 31% in Austria. People say they have seen more false information about Coronavirus than about politics in most countries, but the situation is reversed in Turkey, Kenya and the Philippines, amongst others.

On the journalists people pay attention to. While social media have increased the profile of many digital journalists, we find that the most well-known journalists in most countries are TV anchors and presenters. When asked to name journalists they pay attention to, few people can name foreign correspondents, while newspaper columnists have higher name recognition in countries like the UK and Finland than in Brazil, the United States or France.

On journalists and social media. Around half of respondents or more in most countries feel that journalists should stick to reporting the news, but a sizable minority – especially younger audiences – believe they should be allowed to express their personal opinions on social media at the same time. These findings cast light on a growing debate about how journalists should interact in more informal spaces such as Facebook and Twitter.

On climate change coverage. Audiences in Australia and the US are much more polarised on the issue, express less interest, and pay less attention than news consumers in markets such as Chile or Portugal. Younger audiences, on average, are more likely than older ones to think news outlets should take a clear position in favour of climate change action rather than reflect a range of view and let people decide for themselves. Across all markets, more people say they pay attention to film and television documentaries (39%) than to major news organisations (33%) for information about climate change.

On news audiences’ privacy concerns. With first-party data collection becoming more important for publishers with the imminent demise of third-party cookies, we find that most consumers are still reluctant to register their email address with news sites - just 28% across our sample. Only around a third (32%) say they trust news websites to use their personal data responsibly, similar to the percentage who say the same about online retailers (33%).

On online video. Despite the popularity of video formats, the report finds that all age groups, on average, say they still prefer to read news online rather than watch it. Respondents say they prefer reading online because it is quicker (50%) or gives them more control (34%). Around a third (35%) say they are put off by pre-roll ads that sometimes appear ahead of videos.

On podcasting. After last year’s slowdown in part caused by restrictions on movement during the COVID-19 pandemic, growth in podcasts seems to have resumed, with 34% consuming one or more podcasts in the last month (average of 20 markets). Our data show Spotify continuing to gain ground over Apple and Google podcasts in countries such as the UK and Germany. YouTube is also benefiting from the popularity of video-led and hybrid podcasts.

Link:
Download the report
Read the online version of the report
Attachment: