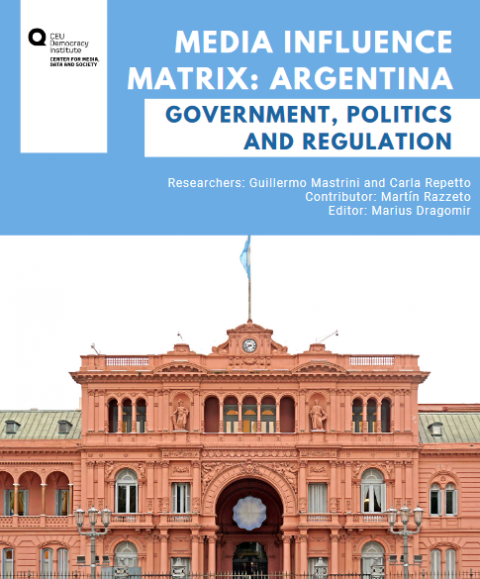 In Argentina, freedom of expression is officially guaranteed by the Constitution and the government has the upper hand in media regulation. Yet, it is the largest media groups in the country that exert real influence in the policy process, according to a new report published today by CMDS.

For decades, the media businesses in Argentina didn’t have any notable conflicts with the authorities, a result of a history of collusion between media owners and the political power, according to a new report focused on the relations between policymakers, regulators and the media in Argentina released today by the Center for Media, Data & Society (CMDS).

“There has been a tacit pact, in which the media were not significantly critical in exchange for the non-interference of political power in the development of their markets,” according to the report, which was authored by Guillermo Néstor Mastrini, Carla Belén Repetto and Martín Razzeto.

However, the period 2008-2015 was marked by a strong confrontation between the government of Cristina Fernández de Kirchner and Grupo Clarín. The enactment of the Audiovisual Communication Services Law passed in 2009 stands out as an attempt to mitigate the concentration of media ownership and encourage non-commercial media.

The 2009 law contrasted with historical trends in communication policies where media companies in general managed to promote policies and laws aimed at the deregulation of media ownership. Their lobbying is usually successful. “Companies are always listened to by governments,” states the report.

In spite of its power, the media industry in Argentina doesn’t represent a homogenous group of interests. On the one hand, there is a group of powerful multimedia groups based in the city of Buenos Aires (Clarín, La Nación, América). On the other hand, the country has a sector of medium and small media that are based in the rest of the country.

Issued in cooperation with Observacom, a pan-regional think tank covering Latin America, the University of Santiago de Compostela and the Research Center for Cultural Industries, Communication Policies and Public Space (ICEP) at the National University of Quilmes (UNQ), the report presents the key developments in media legislation and describes the main regulatory mechanisms that affect media and journalism in Argentina. It also offers an analysis of the most influential players in the Argentinian media policy field, with a focus on industry, civil society, political players and external influencers.

The report is part of the Media Influence Matrix, CMDS’ flagship project that, since 2017, has been researching the changing landscape of government and media policy, with a focus on the changes in the policy and regulatory environment; funding, with a focus on the key funding sources of journalism and the impact on editorial coverage; and technology in the public sphere, with a focus on how technology companies, through activities such as automation and algorithm-based content distribution, impact news media and journalism. The report was published today in English, following the publication of a Spanish version launched in February 2022.