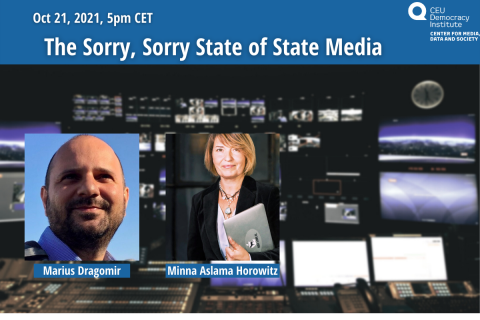 CMDS Director Marius Dragomir discussed the findings of his research on the state of state media with Minna Aslama Horowitz in an online event on 21 October. You can now watch the discussion on our YouTube channel (see below).

The report collects findings of a long research effort, Dragomir explained, that he started 17-18 years ago. The paper is a result of a new effort to understand the latest trends in state media, what happened to their editorial independence, to their governing structures, funding, and how independent they are. It is a collection of facts about state media in 151 countries, with the latest round of research conducted in the last 1.5 years.

What is new in the study is categorizing the media beyond the dichotomy between independent public media and state-controlled media; in between there are a number of models that are more or less independent, he explained, elaborating on the State Media Matrix laid out in the paper.

Dragomir explained the relevance of the concept of media capture, which can be seen in more and more countries, leaving almost no space for independent journalism.

According to him, the picture presented in the paper is very grim.

But as we were doing the research we came to understand again and again how important public media are. If the public service model collapses, we will have nothing. Social media are not content providers. We can see how much we need to recreate the space for independent journalism, and in many countries, it is the role of public service media to save independent journalism and quality content.

Minna Aslama Horowitz called the State Media Matrix a “very daring” model; a normative and political way of classifying these media outlets. Marius Dragomir acknowledged that it is a political study and said many people would probably argue with the classification. What he thinks really important is to try and understand what the role of public media is in the future.

Watch a recording of the event: