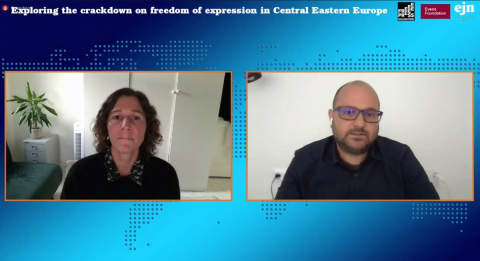 CMDS Director Marius Dragomir participated in a surprisingly optimistic panel discussion organized by the Ethical Journalism Network, the Evens Foundation and Free Press Unlimited on the crackdown on freedom of expression in Central Eastern Europe.

The panelists, Maryia Sadouskaya-Komlach (Free Press for Eastern Europe), Anna Gielewska (Reporters Foundation Poland) and Dragomir, with moderator Aida Al-Kaisy, focused on the challenges that have emerged for independent media with the COVID-19 pandemic. Dragomir explained that the pandemic offered yet another opportunity for some of the governments in the region to intensify attacks on the media and to restrict media freedom. It provided an easy pretext for these governments to attack the media under the guise of protecting people from COVID-related disinformation. He added that the problem is not limited to Europe.

Elaborating on the concept of media capture, Dragomir pointed out its structural, ideological and professional impact. Regarding structural impact, the power gathered by the companies that buy up media outlets, he argued that it is not simply a concentration of ownership but a concentration of influence. The ideological impact comes from the content produced by captured media, and by professional impact he means the impact on journalism as a profession. Because of these multiple types of impact, Dragomir does not think the problems can get fixed quickly, even if the governments in question were to lose the elections.

At the same time, he is somewhat optimistic as he sees that captured media environments have triggered innovations in journalism and have made many journalists more resilient.

A recording of the event will be available on the organizers' website.