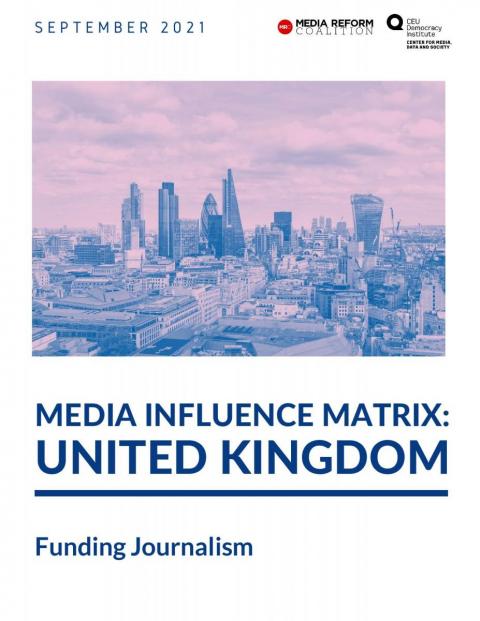 Public funding is the most suited, if not sole, future for Britain’s public interest journalism. But both policymakers and commercial media seem to oppose it. A new CMDS report sheds light on the latest trends in journalism funding in the UK.

The pandemic has been accelerating some of the trends that the British media environment began to experience some years ago as a result of the technological disruption, among other factors. Much of the advertising revenue, the largest source of non-governmental funding for the news media in Britain, is being swallowed by two tech giants, Facebook and Google. The main victims of this shift in funding trends were the local news outlets, which serve small, often neglected, publics. But how are the larger industry players faring in this new environment? Here are a few key findings of a new report released today by CMDS.

How Do the Major Media Players Perform Financially and Audience-Wise?

Television has been affected by the digital transition but not as badly as the newspaper industry. TV revenue peaked in 2015, but since then it has experienced a gradual decline. The most popular broadcasters, however, BBC and Sky, have not been affected much by the decline in ad revenue, the former because it is funded by license fees and the latter mostly because it is financing itself through pay-TV fees. Their next major challenge comes in the form of streaming services, especially the large American ones such as Netflix and Prime Video, which can afford to produce high-quality content that gives them a major edge in their competition with traditional broadcasters.

Radio consumption at nationwide level is dominated by the license-fee financed BBC whose national stations account for more than 44% of total listening time compared to the 21.1% share achieved by national commercial radio stations. In recent years though, BBC has seen a more serious drop in listenership than that of the commercial radio segment.

The UK press is a highly competitive market, but increasingly fragmented among smaller entities. Both DMGT and News media, publishers of some of the most read print and online media in the UK (Daily Mail, Mail on Sunday and Mail Online and The Sun and The Sun on Sunday, respectively) have suffered financial losses in the past few years. Online, the most popular news portal is the BBC followed by the Mail online and The Guardian.

The most popular media brand in the UK remains the BBC. However, the country's main public broadcaster has become less influential in some areas (such as cultural production and entertainment), its funding model is being challenged by the incumbent Tory government and its coverage has been criticized as biased by both left and right leaning groups. Despite all that, however, the influence of the BBC on the UK audience in general, the British political elites and foreign audiences is uncontestable. At the same time, small, niche media outlets, print magazines, periodicals or journals published weekly, fortnightly, bimonthly or quarterly, have gained influence on professional, political and intellectual elites, too.

"The UK has many media whose influence is far greater than their bare circulation or audience numbers would suggest," Leo Watkins, the report's author, wrote. "In some cases, this influence is over elites in politics, the state, business or the media. In other cases, it is influence over other social groups: for instance, professional, cultural and intellectual strata, or the activist layers of the political left, centre or right beyond the professional political elite concentrated at Westminster." Watkins stresses that the Times, The Telegraph and The Guardian have "great inter-media agenda-setting power, often 'leading' the news agenda of the UK's major broadcasters." That also gives them significant influence over the political agenda.

What Are the Biggest Sources of Funding for the UK Media?

Can Public Subsidies Change the Game for the News Media?

Many of the traditional funding models used by news media to support their operation have been criticized for their impact on content, editorial independence and sustainability. News production still largely operates in a market economy, which comes with significant financial pressures for news organizations that focus on public service journalism.

Is public funding the way to go forward if we want a media system that works to serve the public rather than one that solely focuses on profit-making and click baiting? Watkins writes:

"Some form of public subsidy is the only option left but it is not one that the UK's policymakers or the commercial press publishers appear to have much interest in exploring – most likely for two reasons. First, subsidy is seen by many in the press as contradicting their deeply held belief that they are, and always should be, independent of the state. Second, subsidies might come with strings attached that would require some of the UK's tabloid titles to choose between either radically changing their journalism and improving their editorial standards – in effect, changing their whole business model – or being ineligible for the money. In other words, subsidies for public interest journalism are not of much interest to some major UK news publishers because that is simply not the kind of journalism they do."

Authored by Leo Watkins, Funding Journalism in the UK is a report published by CMDS as part of its Media Influence Matrix project. The report is part of a series of three studies on the UK media, with Government, Politics and Regulation published in March 2021 and Technology, Public Sphere and Journalism forthcoming in October, 2021.