Media in Israel: Politics at Work 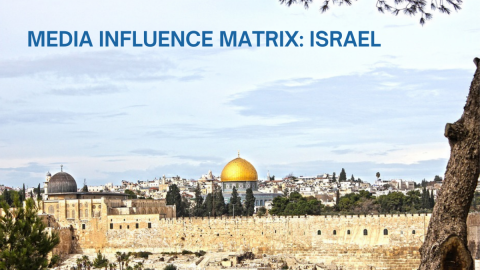 The involvement of high-placed political figures in the inner workings of the media raises fundamental questions about the legitimacy and integrity of professional journalism in Israel today, according to a new report by CMDS.

The Media Influence Matrix: Israel report finds that Israel has a media law framework that is not yet fully compatible with established democratic regimes. The state’s communication regulations are either anachronistic or lack precision.

The written press and online content are unregulated fields, but they are subject to ad hoc regulations enshrined in the penal and civil codes. Censorship is alive and kicking, the report’s author, Roni Dorot writes.

Most Israeli media enterprises are controlled by a small group of owners and are part of larger conglomerates with businesses in non-media sectors. These private corporate structures, under Israeli law, are not required to publish annual financial statements or make financial disclosures to the government and regulators. As a result, the funding of journalism in Israel is an opaque area.

What is known is that most media enterprises are loss-incurring operations. Research shows that they are not run primarily like for-profit businesses but are used as a means to promote the interests of various powerful players, politicians as well as businesses.

In terms of technology, the justification for Israel’s “high tech nation” self-image is somewhat outdated. In recent years corporate losses deepened, cash flows were negative, competition intensified, and the country lagged behind global infrastructure innovations. Although Internet penetration rate among the Israeli population stands at 88%, Israel’s internet speed has been in decline in comparison to OECD countries.

The involvement of high-placed political figures in the inner workings of media raises fundamental questions about the legitimacy and integrity of professional journalism in Israel today. Police investigations into these forms of interference prompted Israel’s Attorney General to recommend charges of fraud and bribery against former Prime Minister Benjamin Netanyahu, in three criminal corruption investigations. Coupled with the complicated and unstable political situation, two transitional governments and five different ministers who served in the communications ministry within four years, this trend makes Israeli media a fragile and vulnerable field, the report concludes.