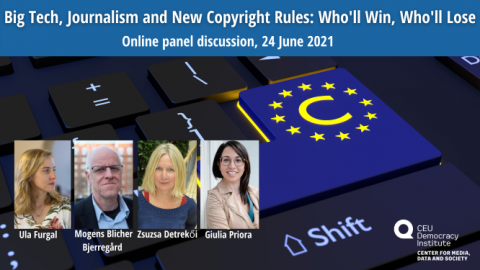 Article 15 gives remarkable power to press publishers against big platforms: the right to authorize or prohibit the use of their online news content. The EU legislator aims to bring press publishers and Big Tech players to the negotiating table and to protect publishers from the free-riding activities of online intermediaries. But is Article 15 the solution?

Zsuzsa Detrekői does not think much will change with the introduction of the new regulation. Platforms will choose from two approaches. Facebook in early June told publishers that unless they license the use of their content, their photos will disappear from the content shared by users. It is likely that all publishers will agree to Facebook’s conditions because they do not want to lose the traffic from Facebook. The other approach is pursued by Google, which will sit down with publishers to negotiate with them and to pay them – but only for articles that appear in Google News. Google News does not have a very big audience, so Google will not pay publishers a huge amount. Detrekői does not think much money will change hands with Article 15, and she said it would not be a solution for the publishers.

Mogens Bjerregård thinks that it is possible that not much money will be paid after Article 15, but it is not because of the Article but because publishers, journalists and authors across Europe do not join forces. If they did, Bjerregård said, they would have a very strong position to negotiate with the tech giants and they could make deals that were good for all parties. He argued that tech giants had to pay their share for the content they made money on, and authors had to be able to protect their work from being misused. Article 15 is not a final solution but if publishers and authors in the EU join forces, they can find the next steps to take.

Ula Furgał does not think Article 15 is a solution. She pointed out that although everybody talks about Facebook in connection with the Article, the legislation was not designed with social media in mind, but with news aggregators and search engines. For her, the good part about Article 15 is that if revenues are generated, a fair share must be given to journalists. She suggested that the issue is how to distribute advertising revenue between publishers. She recommended going directly for the advertising revenue and not thinking about the use of the content itself. For this reason, she does not think Article 15 is the path to take.

Giulia Priora thinks journalists must be given better protection in the digital era. Yet only the last sentence of the Article gives protection to authors, the rest is not about them. Journalists should be put again in the center of regulation, she said, but end users are also important. There should be space left free of legal restrictions and copyright for people just to discuss news about current events, Priora argued.