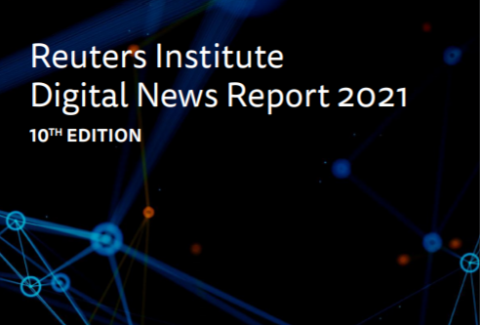 The Reuters Institute Digital News Report 2021 provides evidence that some news organizations have benefitted from a desire for reliable information over the last year – in terms of higher reach, higher trust and more subscribers. But the pandemic has also accelerated shifts to digital, social and mobile environments putting further economic pressure on publishers worldwide. Overall, still only a minority are prepared to pay for online news while younger generations continue to rely on new, convenient ways to access news that are proving hard to monetize.

These are some of the conclusions of the 10th edition of the Digital News Report, which is based on an online survey of 92,000 people in 46 media markets, representing the views of more than half the world’s population and including India, Indonesia, Thailand, Nigeria, Colombia and Peru for the first time.

Trust in news is up in almost all countries

Trust in news has grown, on average, by six percentage points in the wake of the pandemic– with almost half of our total sample (44%) saying they trust most news most of the time. This partly reverses falls in average trust over the last few years that have, to some extent, been driven by increasingly bitter political and social debates. Finland remains the country with the highest levels of overall trust (65%). The United States has the lowest levels (29%) reflecting a divisive election and the aftermath of the killing of George Floyd. In a number of countries, especially those with strong and independent public service media, the report also documents greater consumption of trusted news brands. The pattern is less clear outside Western Europe, in countries where the crisis has dominated the media agenda less, or where other political and social issues have played a bigger role. 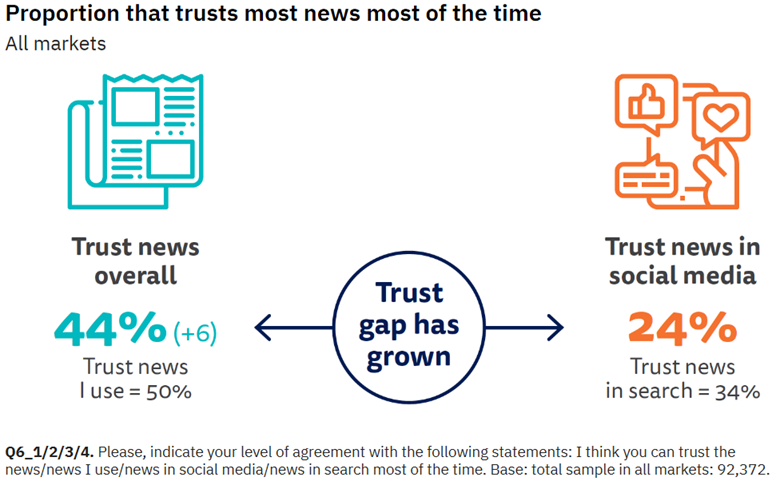 At the same time, trust in news from search and social media has remained broadly stable. This means that the trust gap between news in general and news found in aggregated environments has grown. Lead author Nic Newman says: “The focus on factual reporting during the COVID-19crisis may have made the news seem more straightforward, while the story has also had the effect of squeezing out more partisan political news. This may be a temporary effect, but in almost all countries we see audiences placing a greater premium on accurate and reliable news sources.”

The report documents how badly print publications have been affected by COVID-19, due to restrictions on movement affecting sales and the associated hit to advertising revenue. Countries that have traditionally had high levels of circulation, such as Germany, Austria, and Switzerland, have seen some of the biggest falls and this is accelerating the push to digital subscriptions. Across 20 countries where publishers have been actively pushing digital subscriptions, we find 17% saying that they have paid for some kind of online news in the last year (via subscription, donation, or one-off payment). That’s up by two points in the last year and up five since 2016. Despite this, the report notes that the vast majority of consumers in these countries continue to rely on freely available sources and do not pay for any online news, and most of those who do subscribe to a single title. Subscribers tend to be richer, older and better educated and tend to pay for just one online publication. Most success comes in a handful of wealthy countries with a long history of high levels of print newspaper subscriptions, such as Norway 45% (+3), Sweden 30% (+3), Switzerland 17% (+4), and the Netherlands 17% (+3). Around a fifth (21%) now pay for at least one online news outlet in the United States, 20% in Finland, and 13% in Australia. By contrast, just 9% say they pay in Germany and 8% in the UK. 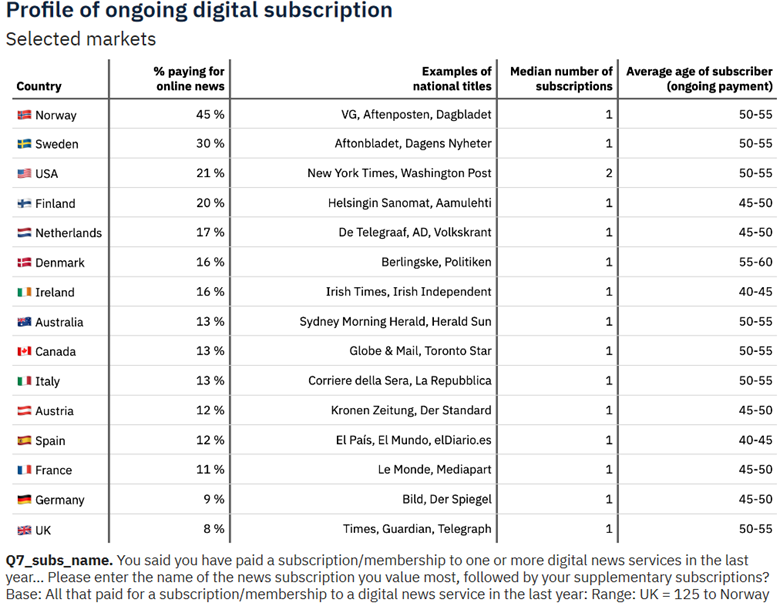 One striking finding from our survey this year is the difference in contribution made by local and regional publications across countries. In Norway, 57% of subscribers pay for one or more local outlets in digital form. This compares with 23% in the United States, but just 3% in the United Kingdom. Co-author Rasmus Kleis Nielsen says: “Subscriptions are beginning to work for some publishers but it won’t work for all publishers and most importantly, it won’t work for all consumers. Many people don’t wish to be tied to one or two news sites or apps, others don’t find the product worth the price. Given abundant access to free news, publishers will need to develop compelling options to bundle publications or more ways of paying a smaller amount for limited access for payment to become a mass phenomenon.”

Concern about misinformation remains high, with 58% of our global sample expressing concern about what is true or false on the internet when it comes to news. More respondents said they had seen more misinformation about coronavirus than any other subject, including politics. They expressed most concern about the role played by politicians in spreading inaccurate or misleading information about COVID-19, followed by ordinary people, activists and journalists. Concern was even higher in Brazil (41%) where President Jair Bolsonaro has made many false claims about the pandemic.

When it comes to the spread of false information about COVID-19 through online channels, respondents in many countries were most worried about Facebook. However, in parts of the Global South, such as Brazil, Mexico, Malaysia and Chile, people say they are more concerned about closed messaging apps like WhatsApp and Telegram. This is a particular worry because false information tends to be less visible and harder to counter in these private networks.

A vote of confidence in impartial news

The growth of online and social media has in some cases encouraged the growth of news organizations and individuals that take more overtly partisan positions than in the past. But survey evidence, backed up by qualitative interviews in four countries, shows that the public still strongly supports the ideals of impartial and objective news, while recognizing that they themselves are sometimes drawn to more opinionated and less balanced content.

Across countries, most respondents (74%) say they still prefer news that reflects a range of views and lets them decide what to think. Most also think that news outlets should try to be neutral on every issue (66%), though some younger groups think that ‘impartiality’ may not be appropriate or desirable in some cases– for example, on social justice issues.

Younger audiences turn to new networks and listen to influencers

Across all markets, just a quarter (25%) prefer to start their news journeys with a website or app. Those aged 18–24 (so-called Generation Z) have an even weaker connection to traditional news sites and are almost twice as likely to prefer to access news via social media, aggregators, or mobile alerts. Facebook has become significantly less relevant for news in the last year, while WhatsApp, Instagram, TikTok, and Telegram have continued to attract more use, especially among the young. Coronavirus and Black Lives Matter have both galvanized the sharing of news-related posts in TikTok over the last year. The network has also been central to a wave of protests by younger people across the world, in countries such as Peru, Indonesia and Thailand. TikTok reaches 30% of our Thai sample, with 14% using it for news. 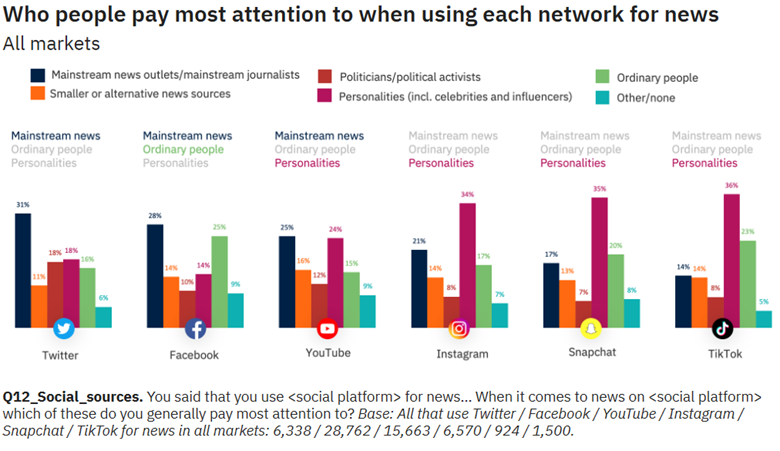 The report also shows how influencers play a much bigger role in TikTok, Snapchat and Instagram than in more traditional networks like Facebook and Twitter. Journalists have traditionally led the conversation in news-focused Twitter but struggle to attract attention in these newer networks compared with celebrities and other personalities. Co-author Simge Andı says: “The lack of strong journalistic presence could make those relying on these networks particularly vulnerable to misinformation. On the other hand, news is largely incidental in these spaces and the expectations of snappy, visual, and entertaining content do not always come naturally to newsrooms staffed by senior journalists with a focus on traditional formats.”

Other findings from the 2021 report

In the light of debates about diversity and inclusion, the report finds that in many cases young people (especially young women) and political partisans feel that media coverage is less fair to them than to other groups. In the United States three-quarters (75%) of those who self-identify on the right feel that media coverage of their views is unfair, compared with just a third of those on the left. Black Americans, Hispanic Americans and young women are also more likely to say media coverage is unfair.

The use of smartphones for news (73%) has grown, with dependence also growing through coronavirus lockdowns. Use of laptop and desktop computers and tablets for news is stable or falling, while the penetration of smart speakers remains limited in most countries – especially for news.

Growth in podcasts has slowed, in part due to the impact of restrictions on movement. Our data show Spotify continuing to gain ground over Apple and Google podcasts in a number of countries and YouTube also benefiting from the popularity of video-based and hybrid podcasts.

As in previous years, CMDS is the Hungarian partner of the Digital News Report. Our Senior Program Officer and Researcher, Éva Bognár wrote the Hungarian chapter. In line with the global conclusions of the Report, many news outlets in Hungary experienced a bump in audience reach early on in the pandemic. Yet with total advertising spend dropping 38% compared to a year earlier, the increased reach was not reflected in revenues, Bognár writes. At the same time, pro-government media received significant state funding via state advertising. The single most significant event in the Hungarian media scene in 2020 was the pro-government takeover of Index, the leading news site and “a major remaining bastion of independent media in Hungary.” While the reach of Index did not fall after the changes in ownership and editorial control, its trust score did drop. In further developments, in the name of fighting the pandemic, the Hungarian ruling parties introduced legislation that encouraged journalistic self-censorship, restricted reporting from hospitals, and excluded journalists from press events. The public service media continued to fail to fulfil their remit. "The dearth of widely used, widely trusted, robust independent news provision risks contributing both to polarisation and politicisation of public discourse and, at worst, can put lives at risk in a situation where trustworthy information is a question of life and death," Bognár concludes.