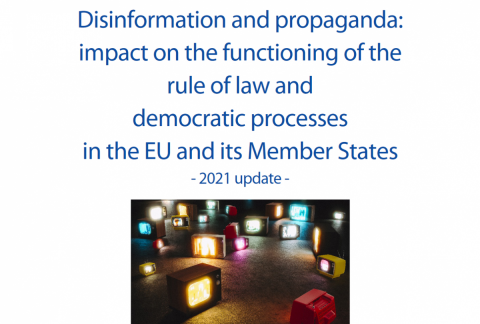 The project, led by Judit Bayer and peer-reviewed by CEU Democracy Institute Research Affiliate Petra Bard, updates a 2019 research paper on disinformation and propaganda. It finds that between January 2019 and January 2021, the impact of disinformation actions and responses to them were considerably different than in previous years. The research shows that disinformation actions increasingly merged with genuine content, and their sources became even more difficult to identify. Particularly strong impacts were seen in cases where disinformation and manipulative propaganda were spread by individuals with high levels of political authority, who enjoy the trust and attention of citizens. Diverse legislative and policy measurements were introduced by various Member States and third states, and civil society responses also flourished, particularly in relation to increasing resilience against disinformation. Ongoing research into the psychological mechanism of manipulation and resilience gives more detailed results. This study aims to provide recommendations on legislative and policy measures to protect democracy, the rule of law, and fundamental rights from the impact of disinformation, as well as to create a structured informational ecosystem which promotes and protects these values.