Tech and Society in Israel: A Gaping Digital Divide 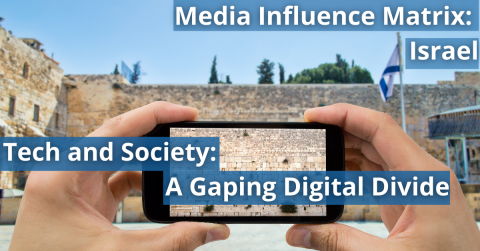 Wrong policy decisions, hyper-competition on the telecom market and a vast technological gap: this is how Israel is losing its high-tech sparkle, a newly released CMDS report found.

Although internet penetration rate in Israel stands at 88%, internet infrastructure, and notably the roll-out of fiber-optics, was not properly regulated until December 2020. Frequencies for 5G network deployment have been allocated only as late as August 2020, in significant delay compared to technologically advanced countries.

This is partly due to political instability, with two transitional governments and five ministers of communication in office between February 2017 and March 2021. “In the absence of an effective minister, the professional echelon takes over powerfully and operates almost unsupervised while heavy regulation strangles market initiatives,” the report’s author Roni Dorot wrote.

As a consequence, since 2019, Israel has seen a comparative decline in internet speed. The COVID-19 lockdown also revealed major failures in the telecommunications market, with entire sectors and regions left without broadband coverage. The state had to ask YouTube and Netflix to reduce broadcast quality during the lockdown to avoid server collapse.

In the last decade Israel has undergone a series of reforms of in its telecommunications market, which has led to a too high level of competitiveness in both the mobile and fixed telephony segments. With prices too low, corporate revenues continuously decreased, making it difficult for companies to further invest in cutting-edge infrastructure.

As for tech companies, Israel is home to a Facebook R&D center, which leads the development of Facebook’s Lite app and the company’s Express Wi-Fi project. Google has also been operating in Israel since 2005, employing 800 people in the country. Waze is developed in Israel.

Yet a large part of Israeli society is left behind the technological advancement. About a quarter of the population, around 3.1 million adults lack or have low digital literacy and accessibility to advanced infrastructure and peripherals. “The ability to use these tools may reduce social disparities and encourage financial growth, and thus makes an important policy objective,” Dorot wrote.

Israel faces a specific digital divide among the Arab population, Orthodox Jews and the 65+ age group. The rate of ultra-Orthodox Jews who reported daily internet use was 37%, compared to about 80% among the religious and the traditional groups, and 92% among seculars. Among members of other religions there is a similar link between self-defined religiosity and computer and internet usage patterns. In general, Jews report greater use of the internet in their social, economic, civic and political lives than Arabs.

In Israel there are about six million social network users (70% penetration rate). WhatsApp is the most popular app in the country; 91% of Israelis were using it in 2019. In 2018, YouTube had 3.5 million monthly unique users in Israel, which is more than half of the Israeli population.

Google and Facebook pay 0% corporate and income tax in Israel, citing their permanent establishment in Ireland as a reason. Local experts say that this exemption gives them an advantage over the rest of the competitors in the local market, reducing significant revenues in the state coffers and preventing the companies that purchase their products from recording their expenses for tax deductions, the report found.

Disinformation is a troubling phenomenon in Israel, according to the study. Interestingly, 58% of the Israeli public think the mainstream media produce more true news than false output, and less than a quarter think the same about social media. Yet, social networks largely surpass both radio and print in news consumption: 76% of the public in Israel consume news content on social networks at least once a day.

This reveals a major paradox: Israelis use sources of news they do not really believe, the report points out.