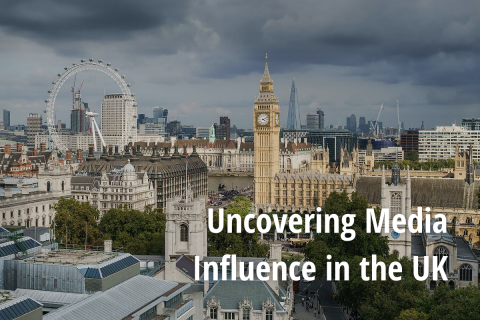 We are delighted to announce that, along with the London-based Media Reform Coalition (MRC) and with the support of the Joseph Rowntree Charitable Trust, CMDS will extend the Media Influence Matrix project to the United Kingdom.

The Media Influence Matrix of the Center for Media, Data and Society is a research and advocacy project that investigates the profound influence that rapid shifts in policy, sources of funding and technology are having on journalism today.

It is designed as a research and advocacy tool that informs researchers, journalists and policymakers about the state of journalism in various countries. It analyzes news media, including established, traditional media, as well as newly-emerged players, and their evolving relationships with politics, government, funders and technology companies, trends that heavily weigh on the future of independent media.

The Matrix is unique in the richness of data it has collected on national media markets. Country research is carried out using a common methodology, which allows for a high level of comparability across nations surveyed.

Since its launch in 2017, CMDS has published 15 Media Influence Matrix reports. 15 additional country reports are under development, including the project’s first reports in Latin America and Africa.

Initially, the project focused exclusively on countries from the non-western world, due to the greater need for research and media reform in those countries. In the past year, however, as media freedom and independent journalism have been rapidly declining in a growing number of Western European nations, partnerships with local organizations to expand the Matrix to these countries have increased. As a result, CMDS has included Austria, Belgium, Finland and Spain in the Matrix. The first Spanish report on funding journalism was published in February 2020.

As the Covid-19 crisis is likely to spiral news media into an even deeper crisis and give governments even more incentives and reasons to tightly control the flow of information, researching the risks to the accountability role of journalism will be crucial anywhere in the world. Researching the power dynamics in the UK media is part of these efforts.

“Including UK in the Matrix is extremely important not only because the report will provide an in-depth analysis of funding, regulations and tech impact on news media, but also because trends in the UK market have implications far beyond the UK,” said Marius Dragomir, the director of CMDS. For example, proposals to change the funding model of the BBC have the potential to negatively influence public service broadcasting globally as many public media outside the UK have historically taken inspiration from the BBC in running their operations.

As the Center has done in the other countries included in the Matrix to date, we will work with local partners in conducting research and follow-on advocacy activities in the UK. Researchers based in the Goldsmiths Leverhulme Media Research Centre will carry out the data analysis while the Media Reform Coalition (MRC), a UK-based independent coalition of groups and individuals committed to maximizing the public interest in communications, will coordinate advocacy and dissemination activities and serve as the main UK partner in the project.

As debates about media regulation are intensifying in the UK, the goal of this project is to ensure that arguments about the importance of an independent public service system and the need to limit the concentration of ownership in the media market are heard by policymakers. Media Reform Coalition, which has a long history of engaging with MPs, will play a key role in achieving this goal.

The report’s policy recommendations will be drafted in consultation with the Media Policy Project at the London School of Economics (LSE). The research and advocacy work in the UK will be managed by Des Freedman, a founding member of MRC, now Deputy Head of Department and Co-Director of the Goldsmiths Leverhulme Media Research Centre.

Lead researcher and Main author of the report is Leo Watkins, a former commercial media analyst, a PhD student in media and communications at Goldsmiths, and a member of the Media Reform Coalition’s coordinating committee.

The project is funded by a grant provided by the Joseph Rowntree Charitable Trust, a philanthropic grant making trust that supports work undertaken in the UK and Ireland.