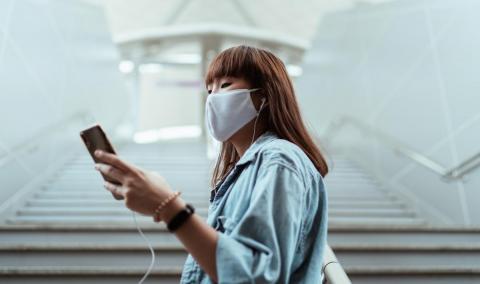 The pandemic increased the need for access to accurate information. A recently created Facebook group binds radio stations, listeners and markets together during lockdowns.

The Covid-19 pandemic forced radio stations to navigate in an unknown environment. While it resulted in an audience growth for many news organizations, the economic crisis caused by the pandemic and the lockdowns hit the already struggling media market very hard.

Every platform needs innovative ideas to stay afloat, and the Coronavirus Radio Ideas Facebook group was created to facilitate this. It is a space for radio stations, enthusiasts and experts around the world to curate and exchange ideas of what they're doing to continue delivering quality and out-of-the-box content to listeners. To confirm interest, its membership now stands at almost 3,000 from more than 80 countries across the globe.

“Radio has been good for sharing and exchanging ideas for decades, since the beginning really.

We felt a responsibility to help our industry navigate this crisis that was approaching like a tidal wave," said Ken Benson, founder of the P1 Media Group in the US, who started wondering and deciding about how it would be possible to mobilize the global radio community in this uncharted territory.

The response has been overwhelming with the community sharing an incredible amount of ideas since last March when it was created, clearly showing that people are craving distractions during the pandemic. Several radio stations chose a “communication for development” approach, alluding in their broadcasts to more serious issues like infections and deaths, and hammering on preventative measures.

To buttress the point that radio shines in times of crisis through community service, Kevin Bellwood, the Head of Broadcast at NRG Media Limited in Kenya, who together with Benson participated in a recent annual Radio Days Africa webinar entitled "I know Corona" said that his youth-oriented network devoted time to dealing with combating more serious needs like hunger by supplying struggling families in impoverished areas with a staple of ingredients for traditional Kenyan dishes.

Radio stations still want to remain trusted and reliable to their listeners by keeping musicians and fans connected in the absence of live concerts, which has resulted in high unemployment in the music industry. This has had devastating effects on society, as most artists cannot book any gigs and are unable to earn an income, leaving fans deprived of one of their pastimes. “We developed One Africa, a festival consisting of three virtual shows, featuring a collective group of artists from East Africa.

It was live streamed across all channels, and 10 million people tuned in to watch,”

Bentwood said, stating that there was a strong emphasis on local Kenyan music content.

Benson, whose P1 Media group provides strategic and music research to radio stations around the world, says that well over 200 ideas have been shared in the Coronavirus Radio Ideas group, and encouraged members “to borrow, steal or adapt” them, so their listeners can get something to survive during the pandemic.

Branded as a commercial music radio station, SUPER FM in Nicosia, Cyprus was challenged not to provide the public with scary statistics and information concerning Covid-19. They sought to enhance awareness through digital campaigns on social media while inspiring people to remain safe by respecting the government’s guidelines.

"We selected as our major campaign the delivery of a strong social message in the form of a song. The General Manager of SUPER FM who is also a songwriter, had the brilliant idea to compose

an encouraging song that delivered the message that ‘everything will be okay’,”

Then, they contacted two famous and well-respected Greek singers, who shared the enthusiasm while introducing their music to the motivational lyrics. The video clip of the song was also promoted by 50 well-known ambassadors: television and radio presenters, athletes, actors and others.

Love is Bigger Than the Pandemic

Due to the pandemic many couples had to postpone their wedding, which meant that many hours of preparations and anticipation were lost and turned into despair. But for the biggest private radio station in Austria – kronehit – a well-crafted radio promotion proved that “love is bigger than corona”, reports staffer Nadine Sauer.

"Over 800 couples entered a lucky draw, and for those devastated listeners, morning show host Meinrad Knapp searches for help,” she wrote in the Facebook group.

The host reached out to the priest of the world famous Stephansdom in Vienna, who offered his help: he not only opened the cathedral for an exceptional occasion, but carried out the wedding himself.

One powerful community media idea shared on the platform came from the Radio City Talk and Greatest Hits Radio News, Liverpool, UK which in April organized Mental Health Monday, a Day of Action on Mental Health in lockdown. This included a fully-fledged radio mental health training session with 37 organizations signposting their services through four hours of all-talk radio. A 200% increase in calls to services in the area were made on the day.

Similarly on Benson's P1 Media group, Triple M’s No Talk Day was set to return on July 1 across 43 US stations. On this day, there were no shows, no ads, no news, no traffic reports and no announcers on-air to raise awareness of men’s mental health: an appropriate discussion during the current pandemic.

Listeners were poised to hear inspirational stories from people who have found their way back from significant mental health challenges and receive helpful tips for those who may not be ready to talk yet.

Pacific Media Group (PMG) which runs 16 radio stations, found a creative way to help local small businesses that had suffered during the Covid-19 pandemic, by offering to them an advertising campaign that cost US$ 25,000.

"With so many businesses on Oʻahu [one of the Hawaiian islands] having been closed for months and financially stretched beyond their breaking point,

it only seems proper to give back to our community as best we can,”

David Baronfeld, PMG/OAHU Marketing Manager said in a press release, adding that “winning a US$ 25,000 advertising campaign will be a lifeline for some businesses that PMG is honored to provide."

The ad campaign was scheduled to run on the group's Honolulu stations with PMG set to assist the winning business with some coaching.

RED FM Delhi is also launching a new campaign, ‘Dilli Deke Dekho’. “The aim is to reach out to the people of Delhi and encourage them to donate plasma,” Nisha Narayanan, Director and Chief Operating Office of RED FM & Magic FM wrote on Twitter. “Plasma therapy as a cure to Covid-19 has kindled a ray of hope for those affected with the virus. We are hopeful that in some way this will help bridge the gap between donors and patients,” she added.

Across the world many media houses have been forced to shut down. Circulation and audience numbers have gone dismal, advertising revenues have dwindled and employers have been quick to cut salaries or even lay off staff members. Suffice to say that these drastic conditions have threatened a potential demise of the media ecosystem.

The Covid-19 pandemic has once again highlighted the significance of radio, in particular of the community radio, in fighting against a pandemic, writes Abdul Samba Brima also citing Duduetsang Makise, National Coordinator at SOS Support Public Broadcasting in Johannesburg, South Africa who spoke during a 2020 Radio Days Africa webinar about the significance of radio during this crisis and how its level of intimacy stands above all other platforms.

“Now more than ever, we suddenly realize just how intimate the radio platform is above all other platforms.

It has become more than just the trusted friend to families and communities, it is the go to place for credible information,” he wrote.

Be that as it may, even radio itself always needs new ideas to survive. Groups like Coronavirus Radio Ideas were established to help alleviate people's burdens. Becoming a member allows for networking opportunities and the exchange of ideas that would not have been possible under past 'business as usual' circumstances.

This is seen as an opportunity to better connect and unite the global radio industry as we’re progressing deeper into the 2020s.

Photo by Ketut Subiyanto from Pexels

John Masuku is a Zimbabwe-based broadcast journalist and Executive Director of Radio Voice of the People (VOP). He is a fellow of the Center for Media, Data and Society (CMDS) at the CEU in Budapest, Hungary. John can be contacted at jjwpmasuku55@gmail.com or via Twitter at @john_masuku