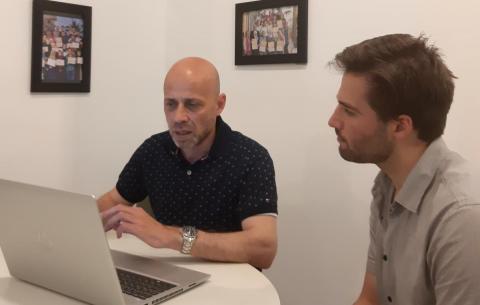 Panic and misinformation make it hard for journalists to get the correct information in Syria, where the government retains a firm grip on the media. Nevertheless, some of them found methods, unused before, to keep track of the cases.

After nearly 10 years of war, Syria was ill-prepared to deal with a pandemic.

In addition to the devastating economic situation and the political divisions resulting from the civil war, the health system in the country is shattered. Just over half of all public hospitals are fully functional, and there is a shortage of personal protective equipment (PPE) as well as trained staff. A doctor from Damascus who wished to remain anonymous recently shared that

“the situation with regards to the coronavirus is frightening.

Nobody is following the protective procedures, and we have many local cases. The government has imposed [isolation of towns], but we don’t have the capacity to test those who have symptoms similar to COVID-19.”

When countries around the world began to go into various levels of lockdown as a result of the COVID-19 pandemic, journalists covering Syria found themselves struggling to access credible information. In Syria, finding reliable information is especially challenging as the government keeps a tight grip on media. Any journalist currently operating in the regime-held territories, which constitute around 63% of the country and are inhabited by the majority of the Syrian population, does so with government permission. Initially in the early days of the pandemic, the Syrian government claimed that there were no COVID-19 cases in the country, even as numbers spiked in Iran, and reliable local sources and health clinics were reporting possible cases.

Covering the pandemic in Syria has meant talking to many unofficial sources, the dominant groups in Northwest Syria, the Kurdish-led administration that governs northeastern Syria (the Autonomous Administration of North and East Syria or AA), as well as keeping track of official government statements.

Only recently, the Syrian government has started sharing more information and publishing numbers of confirmed cases. On March 22, the government announced its first positive case. In the weeks after, the government began releasing numbers of confirmed cases without mentioning where in the country they were located, except in Northeast Syria where the Kurdish-dominated Syrian Democratic Forces (SDF) controls the area. As the world was following the coronavirus developments closely and countries were reporting high numbers of cases, deaths, and hospitalizations, Syria was a virtual black hole.

After it became clear that the Syrian government was not tracking, testing or being transparent, media organizations including Syria Direct began to track the coronavirus spread directly. Aggregated official and unofficial numbers were documented in a map published on Syria Direct’s website and updated regularly. By speaking directly to sources on the ground, including reliable local organizations, doctors in hospitals and other medical professionals, Syria Direct has been able to paint a clearer picture of the pandemic in the country.

Syria Direct’s Senior Editor, Ammar Hamou, says that aggregating data with local organizations and official statements as well as sources who rely on symptoms rather than tests has been the best approach for the situation in Syria.

“By asking doctors who are specialists whether their patients are suspected to have COVID-19, we think we get a fairly accurate picture, but of course we cannot be sure,”

he says. In a country such as Syria, this is often the “least worst” method of gathering and crosschecking facts as private labs are not permitted to do testing. Testing is considered a “security” issue and thus only allowed in government clinics.

Currently the government claims that there are COVID-19 cases in eight out of 14 provinces.

Several human rights organizations and other media outlets, such as the UK-based Syrian Observatory for Human Rights (SOHR), have reported a much higher number of active cases and deaths with symptoms similar to those of COVID-19. In the regime stronghold of Latakia province, there is only one confirmed case, while reliable unofficial sources put the number closer to 10s of confirmed cases.

Syria has seen much misinformation about COVID-19 spread on both social media, as well as official government statements, including a statement that the military is fighting the coronavirus. Such panic and misinformation make it much harder for journalists to get the correct information, as well as to share the credible information once it is published.

In the central province of Hama for example, two days after the government announced the first probable case of COVID-19, a suspected death as a result of COVID-19 was documented first by Syria Direct. However, this death still cannot be confirmed as the patient was never issued a hospital report.

In the northwest province of Idlib, the last opposition area of the country that is currently not under the control of the Syrian government, tests for the virus run on one device. However, the authorities in Idlib have been using a novel technique in lieu of mass testing. By comparing the number of people dying this year with the same time period in the previous year from similar symptoms, they can determine if a sudden increase can be linked to COVID-19.

In Northeast Syria, there is also only one device to run the tests, and to date there have been six confirmed cases and one death, according to a World Vision report. The Syrian government reported the first positive case only when the patient died.

On May 1, the official number of confirmed cases in Syria was 44. On May 24 the number increased to 86 cases. However, on May 25 it rose to 106 – the same date a group of Syrians returned from Kuwait. As of June 23, official government numbers stood at 219. When Syria opened its border to allow Syrians to come back to the country, the numbers increased.

Hamou believes that blaming the increase in confirmed numbers on Syrians arriving from the outside is a convenient cover to justify the sharp increase in cases. In Reef Dimashq (the countryside of Damascus) province, three towns had concentrated outbreaks. Random tests are being done there now, and it has become difficult to hide the large number of cases. The order of the day in government-controlled areas of Syria is not to be transparent until information becomes impossible to hide.

While especially challenging in this context, journalists covering COVID-19 in Syria have had to rely on the most important and fundamental tools of their craft – diligently finding, checking, and cross-checking information, and crafting accurate reporting from the cracks.

Cover photo: Manar Rachwani, Syria Direct’s Editor-in-Chief (on the left) with Reporter Will Christou in their office

Lidija Sabados is a media development consultant and researcher. She is currently the executive director of Syria Direct, an independent media organization based in Amman, Jordan. She has over ten years of experience in media development and freedom of expression, having worked for various non-governmental organizations and intergovernmental agencies. She has also worked as a writer, editor and communications consultant.