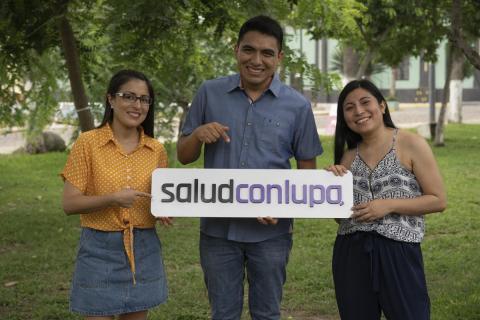 Started as a Facebook group, it has grown into a digital platform covering public health issues. It is the only Spanish-language project selected by the Poynter Institute’s Checking Fact Innovation Challenge in the United States and the Facebook Journalism Project. For its founder, Fabiola Torres, to think about public health is to think about collective wellbeing. In a middle of a pandemic, that is more than a theoretical statement.

When she began working at the newspaper El Comercio, one of the oldest publications in Peru, journalist Fabiola Torres investigated a very complex case in one of Lima's largest hospitals: a group of newborns had been infected with HIV after they received a blood transfusion from a contaminated blood bag.

In 2004, Fabiola had just graduated and started her journalism career and, unknowingly, she was to be linked with a topic that would later identify her professionally: health journalism.

At that time the media coverage of health issues was superficial.

“Normally the coverage is superficial,”

says Fabiola in a video call from Lima. “It is done much like in a doctor’s office. Rather for health than for the collective wellbeing.” But journalism used to have its limits, as it would be proved later.

In 2008, her sister was diagnosed with breast cancer and the reality blow surpassed the findings of her investigations.

“When you know the monster from the inside you have a lot of things to tell,”

Fabiola discovered how ill the Peruvian health system was: inequalities in the access and quality of the medical service, indifference in how patients were treated, irregular medical appointment. In addition, alternative therapies – with their myths, charlatanism and scams – occupied the space that the medicine wasn't filling. None of that served: her sister passed away on December 30, 2009.

After that loss, Fabiola deepened her work in the investigation department at El Comercio and, in 2014, along with a group of colleagues from the newspaper founded Ojo Público (Public Eye). There she continued on the path that would eventually lead her to create Salud con Lupa (Health under Magnifying Glass), the most innovative health journalism platform in Latin America.

Public Eye combined three things: technology, narrative innovation and investigative journalism. For Fabiola it was the opportunity to continue pursuing her health journalism agenda although she was not always able to focus on that area.

Public Eye was one of the media outlets that participated in collaborative investigations led by the Washington, D.C.-based International Consortium of Investigative Journalism (ICIJ) such as the Panama Papers and the Paradise Papers. Health issues investigations were put on hold in 2016. 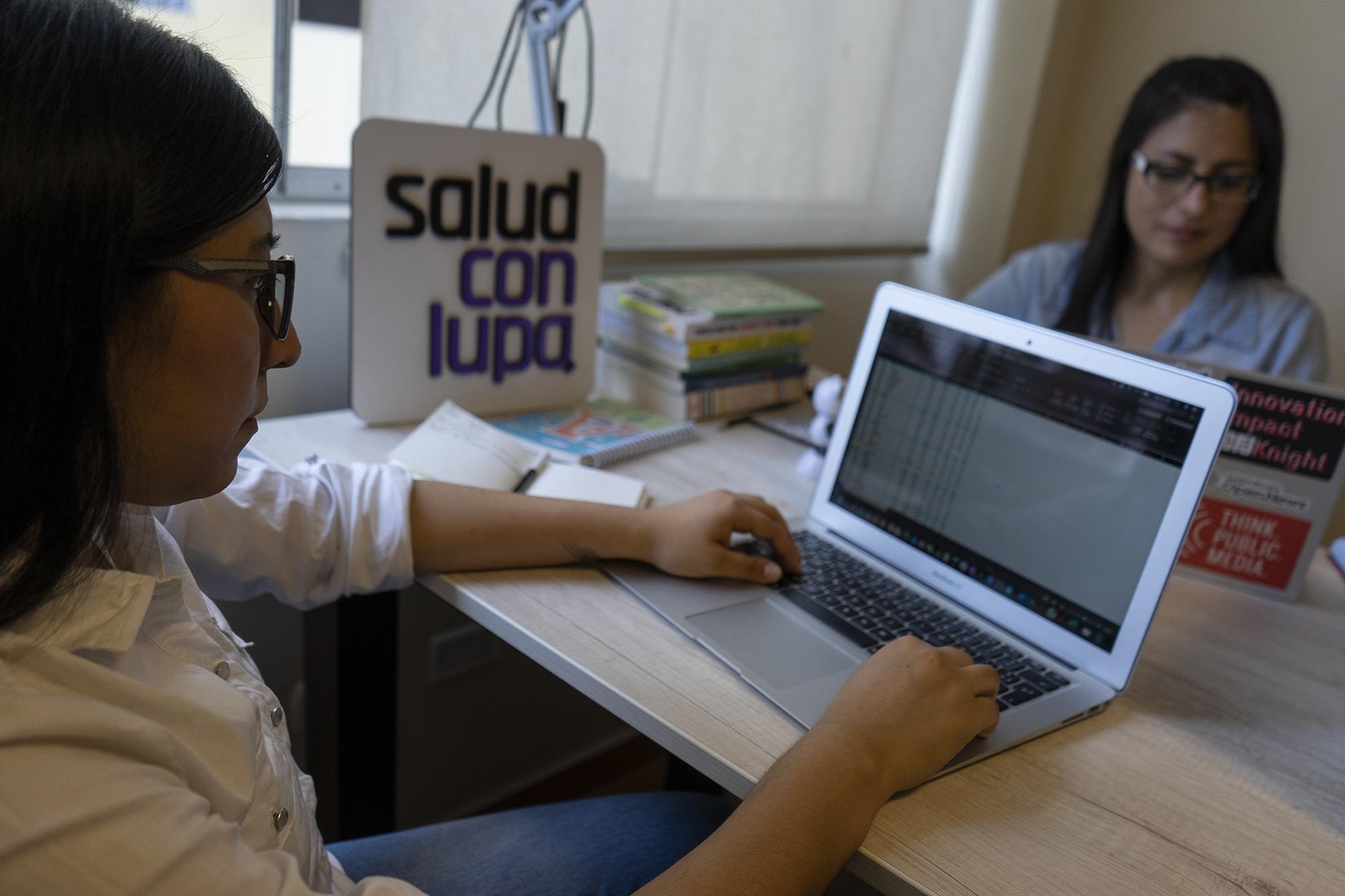 One weekend, Fabiola started a Facebook group meant to share public health news. She wanted to know if there were other journalists in Latin America who shared her interest.

“It was like a respite. A way not to forget that agenda,”

This group was called the Latin American Network of Health Journalists and would grow to 3,000 members. In 2017, Fabiola was chosen to be an ICFJ Knight Fellow, a select title that granted her funding and allowed her to expand her scope of action in the region and to begin to evangelize about the need to improve the quality standards of health journalism that was being done in Latin American media.

But to achieve that, a Facebook group was not sufficient.

During the year 2018 and the first half of 2019, Fabiola Torres put together a team to launch a platform that would be called Salud con Lupa (Health under the magnifying glass). She was in charge of the investigations and fundraising, but she also enrolled two co-founders.

Jason Martinez, a computer scientist with experience in developing news applications and data journalism joined as the head of technology. This would be a key aspect in the visualization of information and getting audience feedback for investigative purposes.

The project also needed a pedagogical approach: part of the deficiencies in health coverage – and the dangers it faced and still faces – is the proliferation of disinformation and fraudulent medical solutions. Therefore, Mayté Ciriaco, a professor and journalist with investigation experience, was enrolled as head of educational programs.

That was the project’s core team, but Salud con Lupa had to also pay tribute to its origins – the Facebook group that continued to grow exponentially – and therefore had to incorporate cross-border collaboration into its DNA.

“We envisaged ourselves as a project that will always have a collaborative investigation agenda with various regional perspectives, and with participants from several other countries,”

On July 8, 2019, they launched their digital platform with the investigation “Health at the Power Table” that exposed conflicts of interests between public entities and food and drugs corporations in Latin America.

Chilean journalist Paulette Desormeaux took part in that first series of investigations and admits that investigating a local topic for a regional audience was a challenge. “That forces you to rethink what things mean, to be able to clearly explain regulatory systems, political culture, lobbying rules,” she says in a WhatsApp voice message.

The second series, however, was about one of the countries with the weakest health system: Venezuela. Journalist Erick Lezama Aranguren reported that only 10% of cancer patients in his country have access to pain medication.

For Erick, Salud con Lupa is transcending the classic journalistic canon by developing educational work on topics that communities don’t always comprehend. “Salud con Lupa is responsible for interpreting them [these topics] and presenting them to the audience in a pedagogical way, which people can easily understand. The project is a resource that dismantles myths and fake news that circulates on social networks," he says via a WhatsApp voice message. 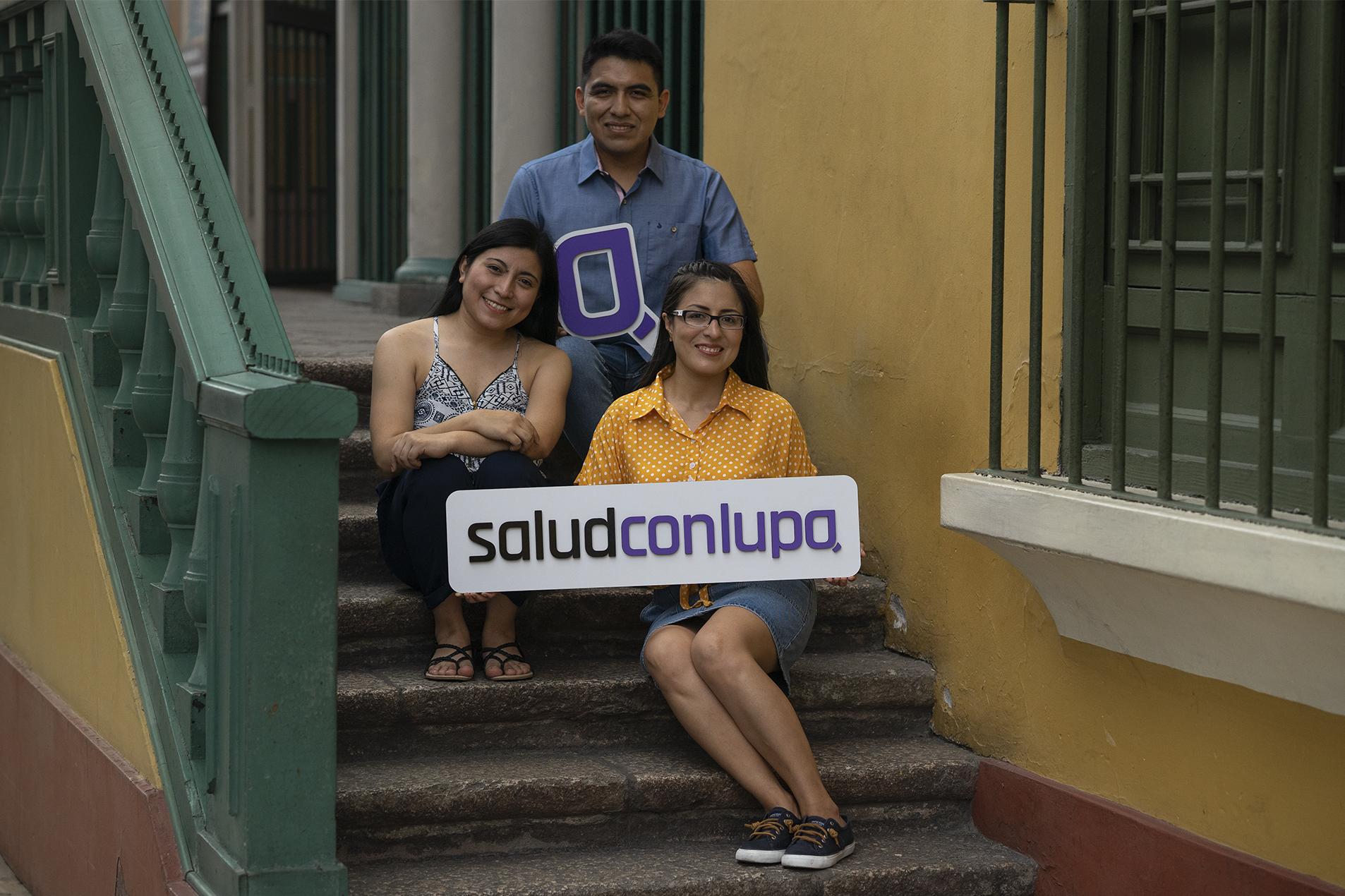 The Covid-19 pandemic would force them to amplify that effort.

In December 2019, Salud con Lupa acquired legal personality in Peru and became a non-profit organization. This was a necessary step to be able to attract funds from abroad. In the same month they applied for projects with the Poynter Institute’s Fact-Checking Innovation Challenge in the United States and the Facebook Journalism Project, which was to announce its winners in February 2020.

In those two months the world changed: the Covid-19 virus came out of China, arrived to Europe and put on alert all the countries in the world. In that context, the winners of the Poynter innovation challenge and Facebook project were announced. They received 90 applications and only seven projects were selected. The only project in Spanish and the only one related to public health was Lupa Colectiva, the proposal of Salud con Lupa to create the first fact-checking platform that combines the inputs of journalists, scientists and citizens.

It is a 12-month project in which they will work with the Chilean organization Epistemónikos, which updates a database with health evidence to be used in decision-making. Jason Martinez explains that Lupa Colectiva is based on the total collaboration that is in the DNA of the project.

"We want people to help us check topics, more so now that we’re overwhelmed by fake news,"

he explains in a WhatsApp voice message.

Salud con Lupa will have a group of fact-checkers. Users will be able to create a profile on the website and ask questions or provide evidence – from their own experience to academic papers – to facilitate verification of information. Jason says the ultimate goal is to have efficient communication channels to receive information from different people in their community.

The pandemic changed some of the Salud con Lupa priorities. In addition to the investigative series, they now have to publish articles on a regular basis to address the growing quest for reliable information. For the same reason, they have enrolled more editors to strengthen the team.

“We’ve managed to have half a million unique visitors in one story,” says Fabiola Torres.

“This audience surge also forces us to have better continuity in our content.”

In May 2020, thanks to support from the Knight Foundation, they launched Programa Lupa, a program that brings together 10 Latin American journalists to cover the pandemic. And they are not only independent journalists: half of them represent other Latin American digital media such as GK in Ecuador, Cuestión Pública in Colombia and Efecto Cocuyo in Venezuela.

Programa Lupa is an extension of what Salud con Lupa was already doing, but now having a pandemic in the middle of the way. For Fabiola Torres, it is a breakthrough moment in the quality standard that this type of investigation requires.

“We think of public health as collective wellbeing. I think that now when I say it, it is not theoretical: the pandemic forced us to understand that public health doesn’t mean doing “medical journalism,” it’s not just placing ourselves in a small part of what health means. We understand health as a whole that goes through local and global decisions, politics, economy,” says Fabiola.

“Everything is connected. From this perspective, we do public health investigation. Journalistic investigation,”