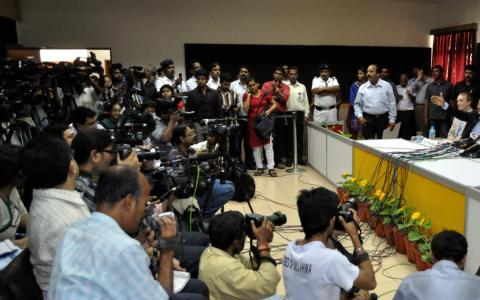 Commercial advertisers are the largest players in terms of funding spent in the media in India, but the state has also a significant role, financing the country’s public service broadcaster, shelling out public advertising money to commercial media and holding a monopoly over the news radio market.

The news media market in India is regionally and linguistically fragmented but ownership is concentrated within a handful of large players, more so in regional geographies. It is significant that the news business is largely run and owned by individuals (and families) with primarily non-media business interests and assets.

Advertising makes the largest cut in the operating revenues of the news media in the country, according to a new report on funding journalism in India, released today by the Center for Media, Data and Society (CMDS).

Two large investors in the Indian news media include Mukesh Ambani and Subhash Chandra. Media is not their primary business. They run Reliance Group and Essel Group of industries, respectively, which are spread across a myriad of industries including petroleum, refineries, telecom, chemicals, textiles, packaging, oil and gas, precious metals, retail, infrastructure, digital services, to name just a few.

Ambani ventured into broadcasting in 2011 when he took complete control over the Eenadu TV network. In 2014, the Reliance group took over one of India’s largest news and entertainment television networks, Network 18 in a €513mn deal. In 2016, he also started what has become one of India’s three largest mobile operators, Reliance Jio. “Such vertical expansion was furthered in 2019 when he entered the television distribution segment by acquiring a majority stake in two of the three largest cable companies in India, DEN Networks and Hathway for €661m,” Vibodh Parthasarathi and Simran Agarwal, the report’s authors wrote.

Chandra, an MP, owns the Essel Group which runs one of India’s oldest and largest television networks with 14 news channels across eight language markets, and 35 entertainment channels across 19 languages.

Large international players in Indian news media include Facebook and Google who have been active in the small but rapidly expanding online news market. They maintain a duopoly in digital advertising, collectively commanding 68% of the market in India and are the biggest competitors to news outlets in monetizing content online.  “Facebook’s messaging platform, WhatsApp, has become crucial in the circulation of digital news in India,” the report found.

The rise of digital news along with various developments in content creation and discovery has motivated companies to engage with various models of funding such as paywalls, subscriptions, freemium model, crowdfunding, and philanthropy. However, such revenue streams contribute very little to whole media funding pie, still dominated by advertising.

The Indian state is also a significant funder of the news media in the country. The Ministry of Information and Broadcasting funds India’s public service broadcaster, Prasar Bharati Corporation of India (PBC), and its television and radio arms, Doordarshan and All India Radio, through grants and subsidies.

“India is the only large democratic country in the world where the state still holds monopoly over news on the radio and has only recently allowed re-airing of All India Radio news bulletins on private FM stations”, the authors wrote. The state also funds commercial news media through public advertising money shelled out by the Directorate of Audiovisual Publicity (DAVP) and Information Public Relations Department at central and state level, respectively.

The Funding Journalism: India report is part of Media Influence Matrix, run by CMDS through a global research and advocacy alliance, the Media and Power Research Consortium, which consists of more than 50 organizations, including academic institutions, advocacy groups, journalist networks and NGOs. The main goal of this project is to investigate the profound impact that rapid shifts in policy, funding and technology are having on journalism today. Each country report consists of three studies, covering politics and policy, journalism funding and technology.