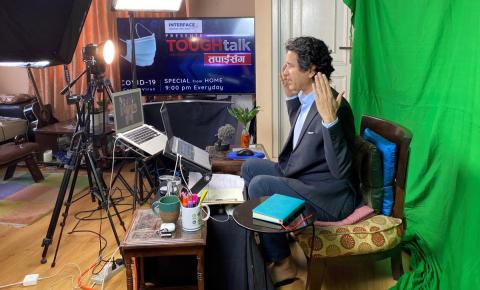 As the Covid-19 pandemic and the ensuing lockdown disrupted media operations in Nepal, a local journalist moved his television talk-show online. An audience of 300,000 people soon followed.

Dil Bhushan Pathak, a television journalist in Nepal, has found a way to get on with work during the Covid-19 lockdown, home and family style. He hosts a daily one-hour show on multiple platforms, and he says that he has never been busier or happier.

Every day Pathak gets up at eight o’clock, makes coffee and does some research for the next hour or so, then he makes some phone calls and plans the daily show between meals; for the show, he provides guests with internet-related support, records, edits and packages the video, and uploads it in the following three to four hours. After dinner, the Pathaks host a Facebook Watch Party (9-10 p.m.), when the show also premieres on both YouTube and Facebook (it is also streamed on Instagram and Twitter). The plans for the next shows are made before bedtime.

The schedule was not as organized in the week of March 24 when Nepal announced the lockdown. Until then the show was broadcast on television.

The show, "ToughTalk with Dil Bhushan Pathak from Home," has about 104K followers on YouTube, and 42K on Facebook. Add to that the 74.3K followers on his own Twitter handle, and about 3,800 on Instagram, and include those who can connect through Pathak’s and his spouse Shikha’s personal Facebook page, and the five million users of Hamro Patro, a Nepali application, and you look at a seriously popular program.

“For about a week I went to bed around 2.30 a.m. and soon realized the lifestyle could not continue,”

said Pathak. “Each body part ached and had to even consult a doctor.” 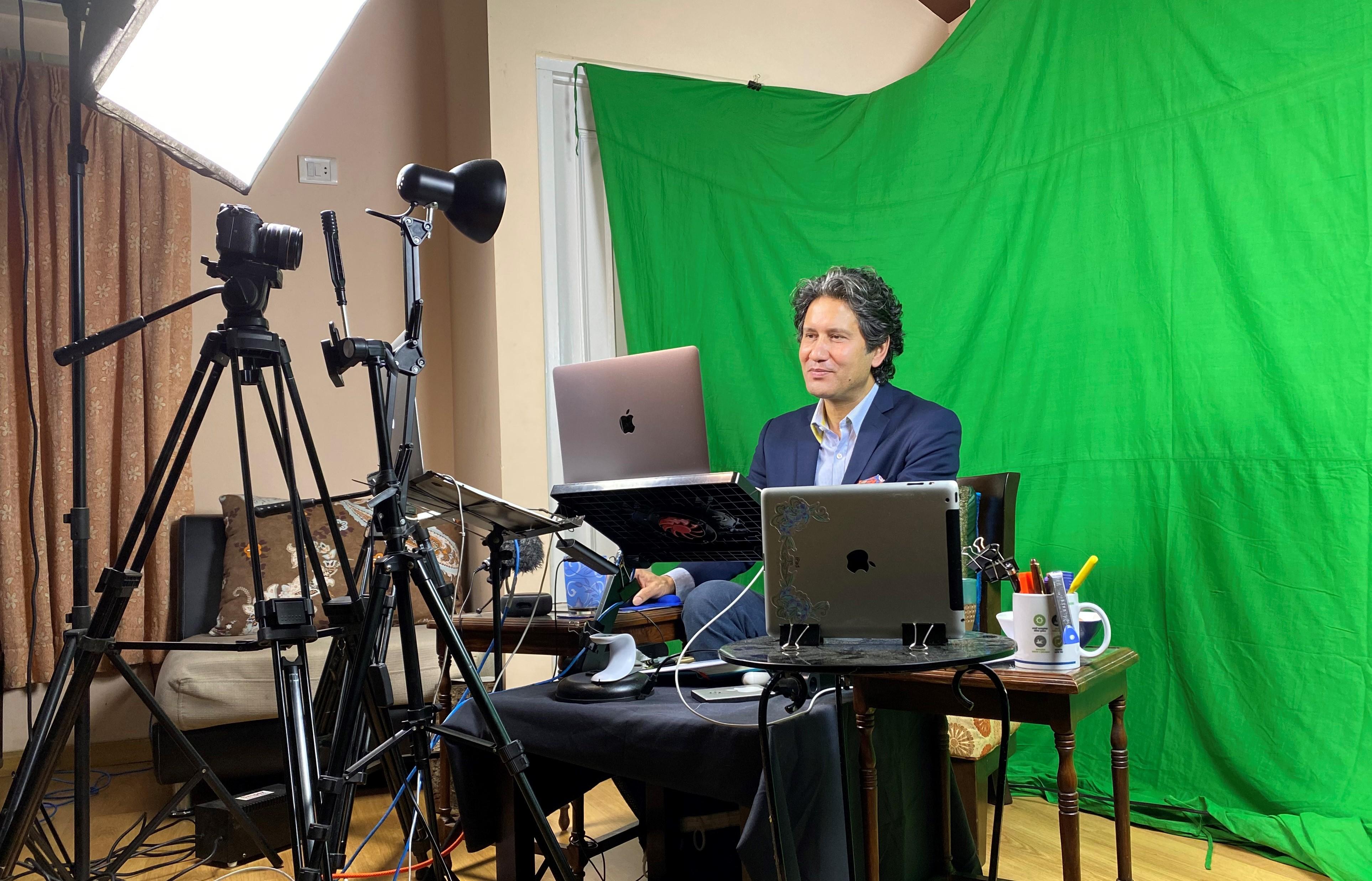 But the idea of taking directly to people the nine-year-old show, which was aired on different national television channels, was not one he was going to let go easily. “I had already planned the show for the 25th and I knew what to do in terms of content,” he said. “The next step was trying.”

Pathak tried different platforms for livestreaming the show and after failing three times, either because of bandwidth issues or other technical glitches, he finally settled on Zoom, the videoconferencing software whose use has soared during the lockdown, for recording the show.

But there was another catch – not all guests were familiar to Zoom. He has overcome this problem by providing a guideline for viewers, instructing them how to sit, where to look, how to light up the face, what to do and what not to do. Sometimes Pathak even had to use Anydesk, a remote desktop application, to help his guests set up Zoom.

His wife Shikha helps with planning and documentation, while his son, Kovid, serves as the in-house photographer/production support person.

By 15 May Pathak had completed 49 daily shows. The show started as a magazine with daily Covid-19 updates from the Ministry of Health, followed by interviews with experts, but soon turned into an interview-based discussion on a wide range of issues, with a twist on Saturdays when recitals and performances by poets, singers and comedians are featured to match the weekend mood. 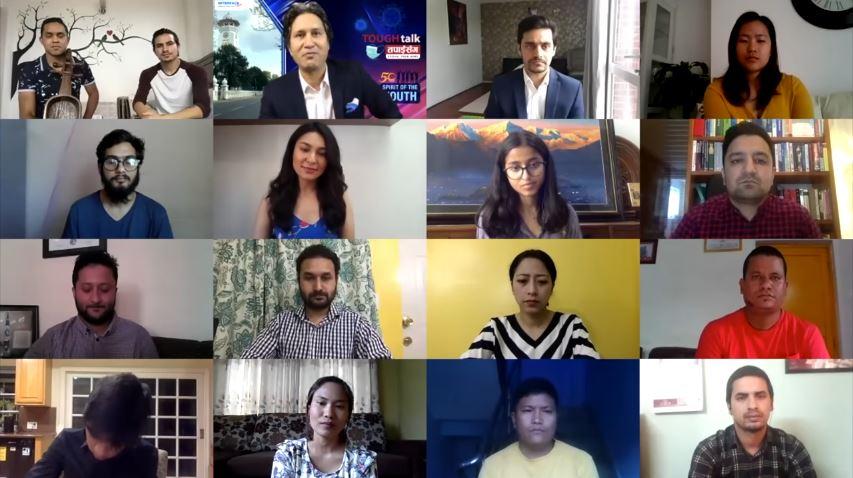 For example, the guest on the show streamed on 14 May was an economist with whom Pathak discussed the priorities of the government that was preparing its annual budget. At any given time, 60 to 76 viewers tuned in online to follow the show.

“We’ve had over 300 people watching some shows when we have the watch party, when

we sit, enjoy the day’s work and respond to comments,”

said Pathak. The recordings, which are available online after the live streaming is over, are usually watched by thousands on YouTube, and even more on Facebook, reaching an estimated audience of about 300,000 who usually get involved by liking, commenting or disliking the show.

The broadband internet connectivity in Nepal, a country of 30 million, hovered around 71% last February. Some 55% of them are mobile broadband users and about 16% have fixed wired connections, according to data from the Nepal Telecommunications Authority, the country’s telecom watchdog.

The Covid-19 lockdown disrupted all media operations in Nepal early on, forcing some large newspapers to suspend publication to account for staff safety. Some resumed publishing when the lockdown was extended.

For example, Kantipur, the largest newspaper, has resumed publication, giving subscribers the option to decide whether they want their copies delivered or use the newspaper’s online version now and get the non-delivered days added to the subscription.

Pathak was editor-in-chief at Kantipur Television in 2015 when he and his team set up a broadcast space with tarpaulin sheets for which he received awards. But the reward he has been getting for the ToughTalk home-made program has been different.

“I’ve never received such feedback in my entire career,”

he said. Among those providing feedback was a social anthropologist at a university who was awed by how he had managed to get people together, organize recordings, manage on-screen appearances, and do the show daily. The academic has advised Pathak to document his experiences for use after the crisis is over.

From Infectious Diseases to Harvest

The ToughTalk shows have covered a wide range of issues, including a discussion with Nepali scientists working on infectious diseases at various research institutions in different time zones around the world. 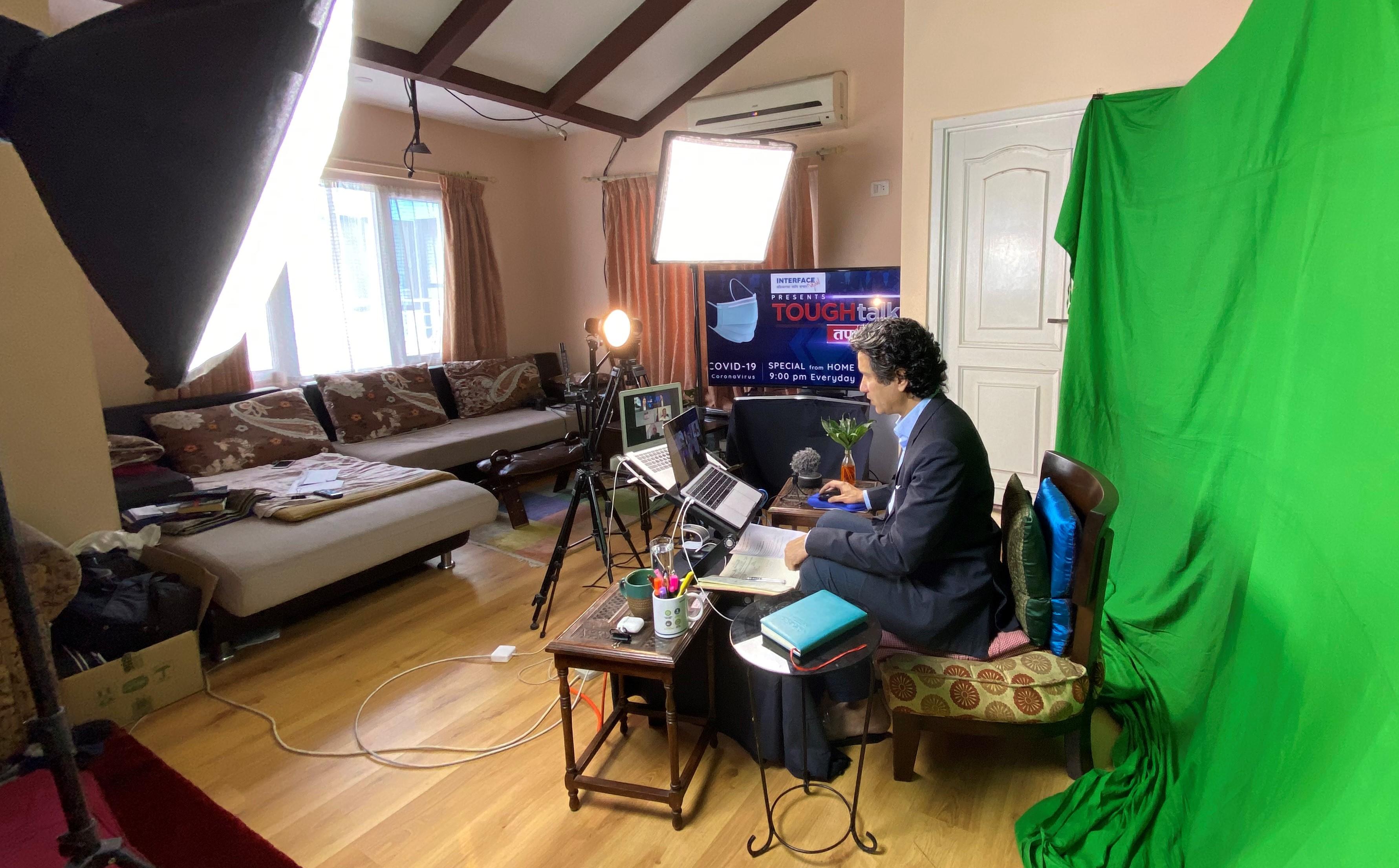 “I’ve had discussions with leaders of local governments who were doing exemplary work while the federal government was engaged in petty politicking,” he said.

“These interviews take longer because there are internet and connectivity issues that need to be tackled first.”

The show had stories about how one local government had taken on the task of harvesting wheat from the fields of the people who had been locked indoors, how another one had purchased medicines in Kathmandu for the elderly needing continued medication and delivered them to their homes, and about how yet another had started an idea of a foodbank to support people in need.

Asked if this was how he thought he would do post-Covid journalism, Pathak says that he would continue with ToughTalk digitally, while also keeping a foot in television “because conservative politicians still prefer a TV station, irrespective of audiences.”

Pathak appeared physically drained by the work in a Zoom conversation with your correspondent. Asked how he coped with the stress, he said: “Occasionally, I have had to take a paracetamol to help ease muscles, at other times a glass of whiskey helps.”