Slovak media outlet Denník N published an investigative article on the connections between a misinformation website and a far-right party leader in Slovakia. The story is based on the report on Slovakia in our Business of Misinformation project. This English translation is published with the outlet’s permission. You may read the original article (published on February 25, 2020) in Slovak here. 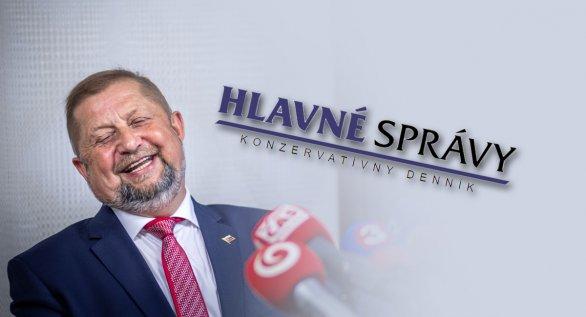 A special code of Harabin campaign was inserted into a disinformation website. The PS/Spolu coalition also faced criticism for Facebook ads this week.

The misinformation website Hlavné správy (Main News) provided data about its readers to Štefan Harabin’s political party Vlasť (Homeland). This allowed the party to target its Facebook ads more effectively. The readers of Hlavné správy webpage were totally unaware of this.

The code of www.hlavnespravy.sk website contained a special code, the so-called Facebook Pixel. This collects information about the readers and sends it to the social page Facebook.

This would be nothing unusual though. Many news sites, online stores and other companies use a similar system. They use this data collected via Facebook Pixel to target their ads better.

For example, the media can target their campaign and offer a subscription discount to those readers who have previously visited their site. They are more likely to accept this offer than people who have never been to the site before.

E-shops attract the potential customers with an ad that offers discount on the product they previously viewed or placed in the basket, but for some reason did not complete the purchase.

The Hlavné správy web, however, did not use this function only for its own benefit, it also helped the political party Vlasť. A code with an ID number of 412544302777737 was inserted into the page’s source code. The same code that the Vlasť party uses on its website stranavlast.sk.

These codes cannot get onto a web by chance, the administrator needs to physically insert them there. 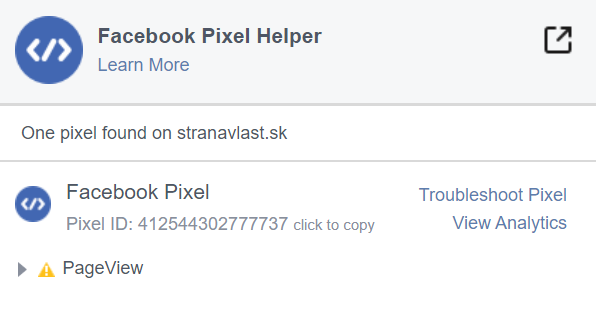 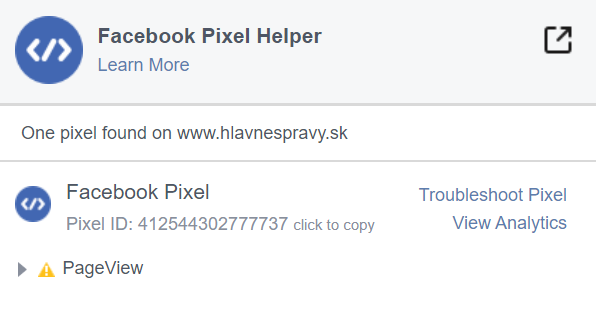 Since March 2019, Štefan Harabin and his Vlasť party have invested more than €100,000 into advertising on Facebook and Instagram. Almost €80,000 went to support the party’s leader, more than €20,000 boosted the party’s Facebook page and the website of Monika Sofiya Soročinová, the seventh candidate on the party’s list, who received at least €1,600.

Soročinová also uses the Facebook Pixel pinned to the Hlavné správy website. She targets her ads to the site visitors over 18 years old, who are eligible to vote.

Soročinová, the candidate for Vlasť, then advertised both texts on her Facebook. Another positive contribution of Hlavné správy showed her boxing. Harabin commented that “she could have easily grounded any Bratislava café loafer“. 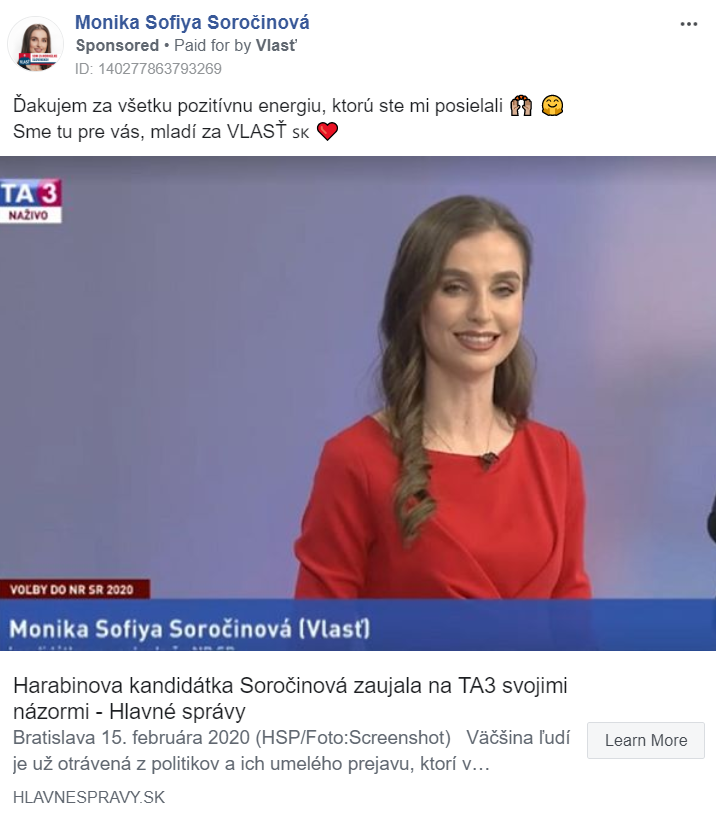 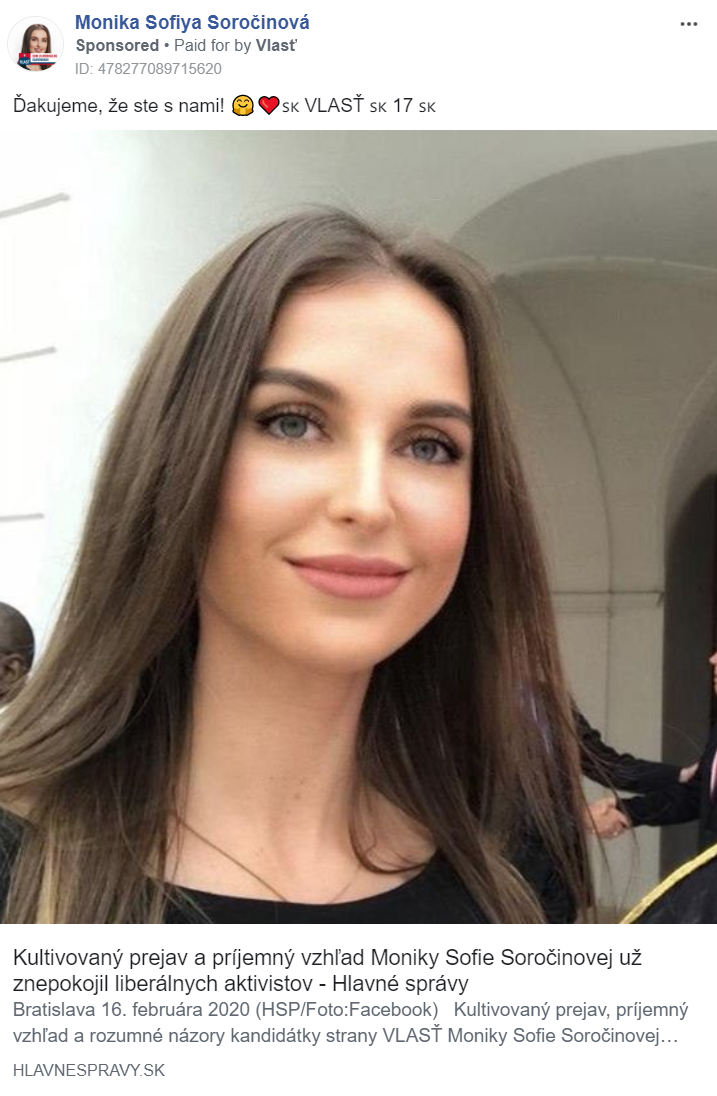 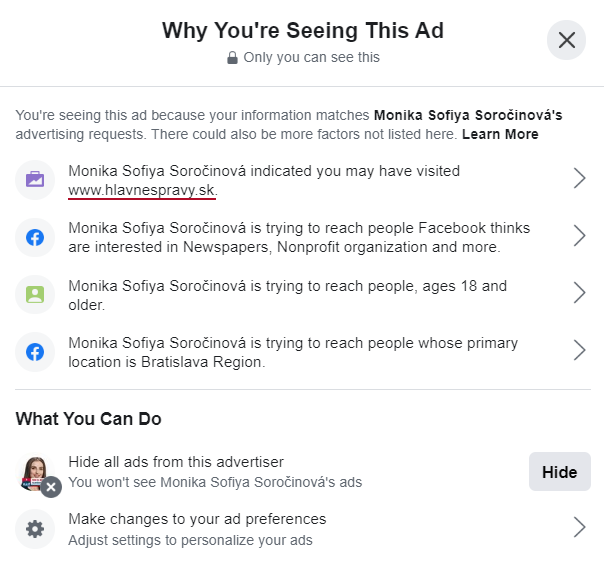 Media keep their data from politicians

Similar to Soročinová, the former judge and justice minister Harabin also targets his Facebook ads. He makes sure his messages are displayed to the readers of Hlavné správy, as part of them may be his voters.

The Vlasť party has not replied to Denník N’s questions.

The fact that Hlavné správy provides information about its readers to a political party is very unusual. It is one thing, when media offer politicians their advertising space to attract voters. But it is completely different to send out the data about their readers, so the parties can target their campaign more accurately.

Independent media do not provide data about their viewers to politicians, as this would count them as part of their campaign.

We asked the editor-in-chief of Hlavné správy, Róbert Sopko, for his statement and explanation. He has not given it yet. However, after submitting the questions, they removed the Harabin’s Facebook Pixel from their page code.

The web viewers are not notified about the fact that their information can be used for a political campaign. The website’s terms do not inform about such use of their data. 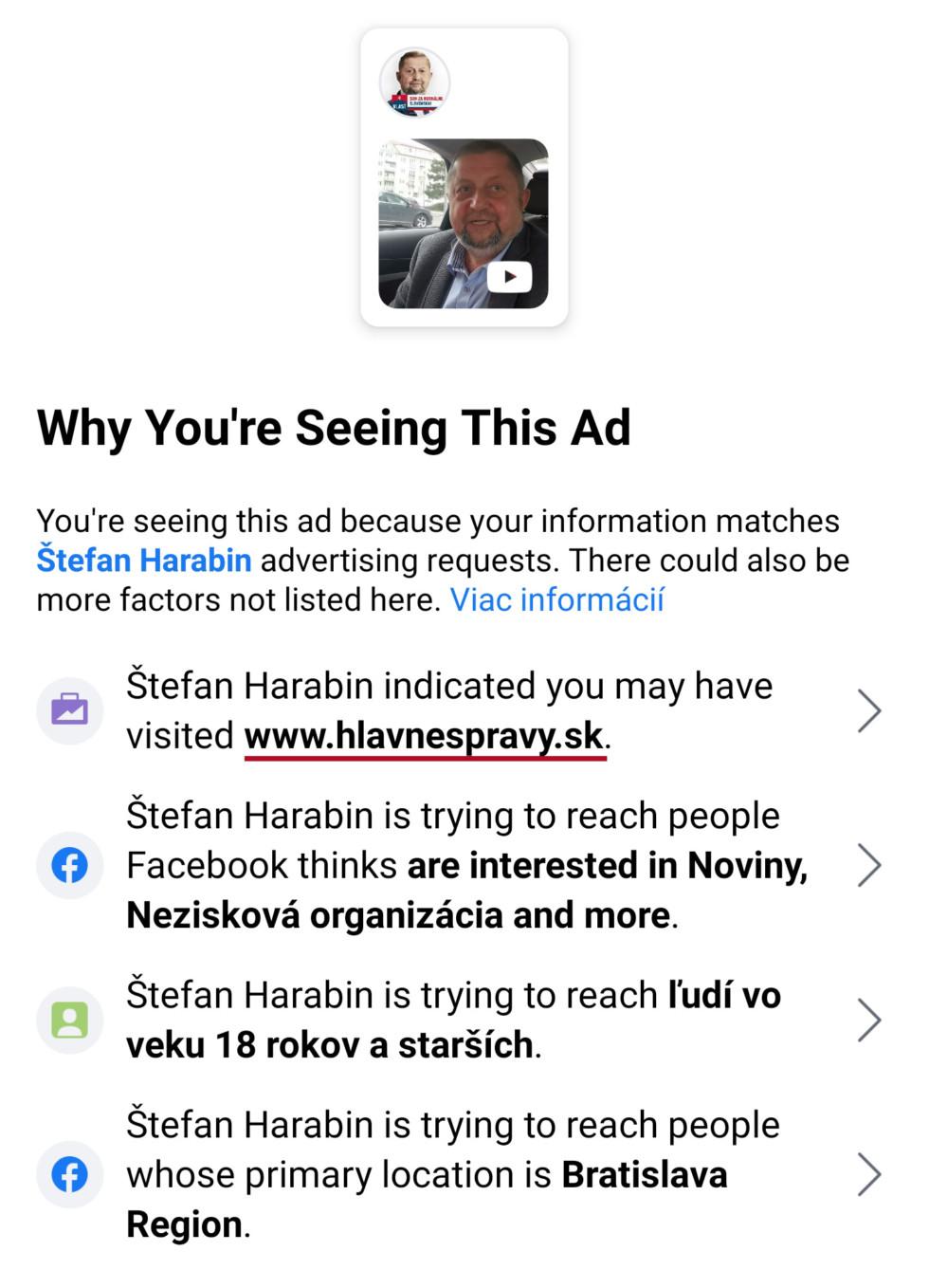 Only some want ads on Hlavné správy

Vlasť is one of the few parties that intensively advertise on Hlavné správy. Most politicians do not buy ads on misinformation sites. This can damage their reputation and would support the running of sites that share false and unverified information.

The Slovak National Party (SNS) is the chief buyer of advertising on Hlavné správy, spending over €14,000. This statement was taken from the party’s transparent account. Kotleba’s ĽSNS party bought advertising on the web for €6,696.

Vlasť party, according to the transparent account, spent nearly €4,300 for advertising on Hlavné správy. Smer officially did not purchase an ad on this site.

Hlavné správy are the most popular misinformation website in Slovakia.

Marian Kočner described himself as a silent “shareholder” of Hlavné správy, in communication with the Nitra businessman Norbert Bödör through the Threema application.

“Do you read Hlavné správy? They have 90-100,000 daily readers and are read by 700,000 individuals per month. An interesting medium,” wrote Kočner on February 24, 2018. “I have been their ‘shareholder’ since March 1. This info is only FOR YOU,” he said, adding that he only works “incognito” for Hlavné správy.

Kočner had a direct impact on some of the articles published on this site. The website also promoted his show Na pranieri (In the Pillory), in which he tried to discredit Slovak journalists.

The editorial office refuses allegations of being linked to Kočner. 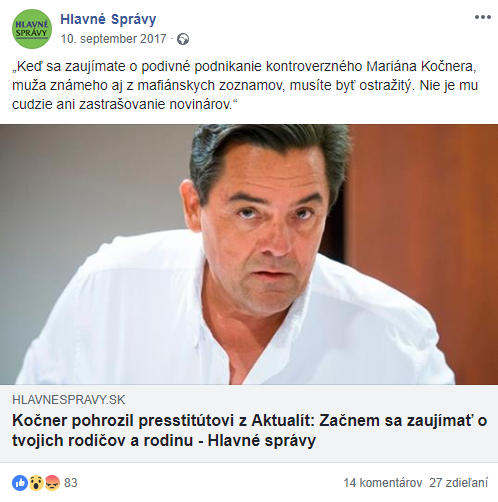 Harabin’s party has the least transparent campaign and half of its sponsors are unknown, says Transparency International Slovakia.

“Patrik Puček is another mysterious benefactor of Vlasť. Last week, he donated exactly one hundred thousand euros to Štefan Harabin’s party. He is the fourth person, who has donated or lent such a sum to this party. No other party in the campaign has so many donors with a hundred thousand euros,” wrote the NGO, which controls the transparency of elections.

“So far, Vlasť has spent one million euros on the campaign, but only revealed the origin of half of the finances. These are mostly loans, but even behind these are publicly unknown people. No other party with such small preferences has as many generous donors as Štefan Harabin,” Transparency added.

PS/Spolu also did a problematic campaign

The PS/Spolu (coalition of the Progressive Slovakia and Together parties) also made a controversial decision. It targeted its social network ads to the followers of President Zuzana Čaputová, who ran for the presidency as their candidate. Transparency International said that the reason they could set up an ad like this was because they had the administrator rights to her page.

“Without this, you can only target demographic or other general user characteristics, which is, of course, more expensive and less effective. It would not be possible to target the president’s website now, even if they had controlled it in the past, the Facebook told us,” Transparency informed.

PS/Spolu explains that they use the same agency for setting up online advertising, as they used in the presidential campaign of Zuzana Čaputová. “We target the Facebook advertising to a large number of end users, depending on their interests and demographics. It was an error that Zuzana Čaputová’s current followers were used. After we got aware of this error, we asked our supplier to remove the targeting of her site’s followers,” the party spokesperson explained.

“Since the president assumed the office, the president’s office has not sponsored social media posts, used any social media advertising tools, and has not even set up a new Facebook advertising account. Following the notification by Transparency International, we have removed the old access rights to the unused ad account from the advertiser, with whom the campaign team had worked during the election campaign, and which remained linked to the president’s Facebook profile. The current administrators of the Facebook page are two employees of the presidential office,” the spokesperson added.

The leader of PS/Spolu, Michal Truban also targeted advertising to the followers of his business book, which he published in 2016. The Personal Data Protection Act prohibits the contacts acquired for a certain purpose to be used for something else.

The article is part of the Business of Misinformation project, run by the Center for Media, Data and Society at Central European University. The project was supported by the Independent Journalism Program from Open Society Foundations.