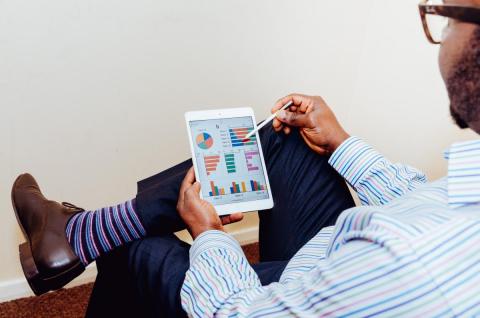 A good visualization can boost the audience, but many media outlets are still reluctant to spend time on visualizing their stories.

“In an era of narrowly-focused media that is often tailored towards audiences with a particular point of view, data vis[ualization] – and data journalism in general – offers the tantalising opportunity for storytelling that is above all driven by facts, not fanaticism,” Sarah Cohen, a Pulitzer Prize-winning journalist, wrote.

In an era when misinformation spreads like fire, that’s good advice.

Data need to be presented to audiences in forms, pictorials or other graphical formats that are easy to consume. The human brain processes about 80% of the information through the eyes, according to a TED study. According to Forrester, a research outfit,

“when we hear a piece of information, we remember 10% of it three days later; if we add a picture, we remember 65% of it.”

The reason, in Cohen’s words, is that “half of the human brain is devoted to processing visual information. When you present a user with an information graphic, you are reaching them through the mind’s highest-bandwidth pathway.”

In short: an image or a chart can have a bigger impact on readers than a couple of paragraphs, however well written they are.

A New Way of Storytelling

Data visualization is not only useful for the audience. Attila Batorfy, a journalist specializing in data visualization who works for the Hungarian media outlet Atlatszo, says that visualizations help to “make invisible things visible,” hidden connections or patterns that readers, or even journalists working on the story, would never think of; or, to put it simply, a good visualization makes the journalistic work easier.

In fact, visualizations can even change the way journalists tell a story. According to the Data Journalism Handbook 2, published by the European Journalism Center (EJC) and Google News Initiative, more and more often data and visualization become the central elements in storytelling: a simple graphic or chart can be the driving force of the story.

“A well-designed data visualization can give viewers an immediate and profound impression, and cut through the clutter of a complex story to get right to the point,”

Cohen wrote. A project run by The Wall Street Journal, which showed the impact of vaccines in battling infectious diseases, is a good illustration.

That is why media in the U.S. and Western Europe invest an increasing amount of money into data visualization, which has proved to be a good investment thus far. Examples from major newspapers including The New York Times, The Washington Post, The Guardian or Die Zeit show that articles with a good visualization attract significantly more readers than text-only ones. Journalists interviewed for the Data Journalism Handbook also mentioned that readers stay on their page a little longer if they insert a simple data visualization in a story.

“It’s just data, but it’s presented with a lot of detail and in a series of steps which encourages the reader to engage with the stories,” Jane Pong, a data visualization journalist with the Financial Times, said at the 2017 Global Investigative Journalism Conference in Johannesburg.

However, just adding a visual doesn’t guarantee that more readers will flock to your stories. Spectacular charts and graphs are clearly more attractive for readers than just plain text, but that is not the only goal of a media outfit.

“If words are sometimes useless by themselves, so are charts, maps, diagrams, and illustrations,”

said Alberto Cairo, the Knight Chair in Visual Journalism at the School of Communication of the University of Miami, one of the world’s leading experts in data visualization. “It is in the combination of words (spoken or written) and visuals that the magic of understanding often happens.”

In fact, putting a few columns next to each other without providing context can be very misleading. For example, an inappropriate scale can make small differences substantial. Atlatszo’s Batorfy gives an example from healthcare coverage. One can show the improvement of many indicators by using eye-catching graphs, prompting readers to conclude that the healthcare system is doing great. However, it's possible that the degree of improvement would be much lower if indicators from other countries were shown, or even show a crisis of the healthcare system.

However useful it is, data visualization is not part of the basic package of journalistic skills, even though there are often articles about complicated connections, networks of companies of financial transactions where visualization would clearly help the audience as well as the journalists. Working with data requires “the ability to understand complicated data or guide a computer to do this,” according to the Data Journalism Handbook.

The good news is that such skills can be learned quite easily.

“Many of those who are now experts started by themselves, because there was no one else to learn from,” Batorfy says, adding that those who want to start learning more about visualization are lucky today as they have access to numerous university courses or workshops that give you the basics. Moreover, the internet also bristles with instructions and ideas for visualizations including tutorial videos, handouts, and descriptions of what to do and what kind of plugins to download.

It is also important that journalists can choose free, user-friendly data visualization software.

“It is good to have an arsenal [of software], from which the journalist can choose the most suitable one, because there isn’t a universal software,”

Batorfy said. Some of the programs most recommended for journalists include Infogram, Fluorish, Tableau, Mapbox, Gephi and Cytoscape.

Few people know that even Excel, the spreadsheet program made by Microsoft, can be used to produce visually attractive charts. “It is easy to do very nice charts with it, but also ugly ones,” Batorfy said. When using Excel, following a few thumb rules such as forgetting default settings and paying attention to colors is recommended, Batorfy said. He also suggests following experts such as Alberto Cairo, Andy Kirk, Nathan Yau or David McCandless on various social media where they offer practical advice about making visualizations more appealing.

Photo by Adeolu Eletu on Unsplash