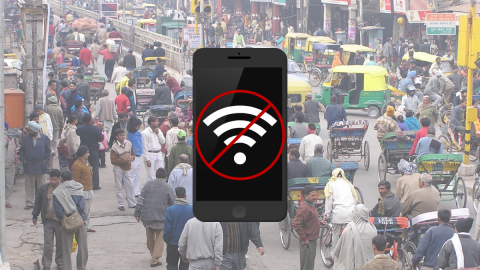 The recent waves of extensive internet shutdowns across India not only restrict social and economic rights, but also adversely affect people’s mental health.

“I had to seek psychological counseling for the first time in my life during these times,” said an Indian student from Central European University (CEU), a private school in Budapest and Vienna, referring to the recent wave of internet shutdowns in India. She spoke on condition of anonymity because of the sensitivity of the issue.

“I didn’t realize this was going to happen until my call with parents back home got disconnected,” another student from India who attends Gender Studies classes at CEU said, recalling the period of shutdowns last December.

“My panic escalated quickly when I saw a video of things and cars burning right in front of my dad’s office.”

Communication shutdowns are known to hinder people’s social and economic rights. But the impact that they have on people’s mental health, pushing them into isolation and various forms of anxiety, which occurs as a result of inaccessibility to information and communication, is often ignored or downplayed.

“Communication is hardwired into our system, the very act of vocalization and verbalizing is something innately present within us,” said Nilanjana Parijat, a psychology research scholar at the University of Delhi. “Even though internet is a part of evolutionary development, it's come to become an extremely imperative facet of our psyche.”

Muzzling Independent Voices: We Have a Champion

India is the world’s leader of internet shutdowns. It shut off the internet 381 times since January 2012, more than 100 times in the year 2019 alone. The country was home to 69% of all internet and communication shutdowns documented all over the world in 2019.

The shutdowns were mainly triggered by a wave of protests against the Citizenship Amendment Act, a law adopted by the Indian parliament last December that was sharply criticized by human rights activists who claimed that it limited Muslims’ access to Indian citizenship. To muzzle dissent, the government of India imposed absolute internet shutdowns in different parts of the country including several districts of Uttar Pradesh and Assam, and some regions of Delhi.

The shutdowns particularly affected the 17.5 million Indians living abroad, the world’s largest diaspora, whose only way to communicate with their families is the internet. With shutdowns being imposed in the entire country, their life came to a standstill as they feared for the wellbeing of their loved ones back home, especially when the protest was engulfed into violence and terror.

“Considering [that] all my final term papers were due at the same time, I couldn’t concentrate on them at all,” said the CEU Gender Studies student. “I was also out of money and wasn’t able to contact them [my family] even for that [reason], which kept me on a tight budget in December.

My already existing mental health issues deteriorated during this time.”

The student’s mental troubles spiraled, forcing her to eventually seek a psychologist’s advice.

The impact was even worse for people coming from some of India’s regions most hobbled by shutdowns like Kashmir. In 2019, Indian government turned off communication services in Kashmir for a straight 150 days, cutting off the world from all events happening in Kashmir. The isolation followed the revocation by the Indian government in August 2019 of Kashmir’s special Indian state status, the government’s response to the unrest in the region.

Kashmir has remained a contentious conflict zone for decades as both India and Pakistan claim the region, each ruling parts of it. Two of the three wars between Pakistan and India were fought over Kashmir.

Although tough treatment was not new to Kashmiris, shutting down communication for nearly half a year was unprecedented. Ubaid Mehraj, a Kashmiri working in Budapest, who was home in Kashmir during the communication shutdown, said that he saw long queues in front of the police station with people “lining up even for two days just to call their family living outside Kashmir.

There were no banking services and people were running out of cash.

It was a terrible situation.”

Mehraj said that his girlfriend back in Budapest got so worried that she almost called the United Nations office. “There was violence and unrest everywhere in the state,” he added. “It seems that our country is going towards the Nazi time in Germany.”

Communication: Keeping a Lid on It

Communication and internet shutdowns are more than a technological tool. Shutting off internet is a political act in itself emanating from the desire to control the power and public discourse. Cutting off communications therefore affects people deep down at personal and psychological level.

“Communication shutdowns can cause all kinds of things from an effect on people's livelihoods to a fear of an existential dread,”

In today’s modern world, with education, information, economy and business all inextricably linked to internet, it is hard to survive a day without internet-based services. Moreover, the internet has become a platform for freedom of speech and expression, giving everyone a chance to express their views, reasons that prompted the United Nations to declare access to internet and digital communication a basic human right.

Michel Foucault, a French philosopher who lived last century, wrote that power is actualized through knowledge of dominant discourses in the system. In other words, those who have the knowledge exert power in the society. Since, in the modern society, internet has become a gateway to that kind of knowledge and information, one can see in the communication shutdowns all over the world an attempt by governments to concentrate power in their own hands to muzzle dissent and rebellion.

The shutdowns in India are likely to have a lasting impact. Although communication has been restored in the country, a constant fear that it will happen again, anytime, settled in people’s minds. “Since the protests are still going on, I am quite sure this can happen to me again, [and] I would not be able to contact my family,” said Chitrangi Kakoti, an Indian student based in Budapest. “But this time, my parents and I are mentally more prepared for this; I know how to deal with this now.”

For the time being, Kakoti found a Skype subscription that doesn’t require internet connection. Going offline to be able to communicate in the age of internet can be baffling. But in India, that is dangerously becoming a sign of normality.

Sneha Singh is a student of the Department of Gender Studies at CEU.