Hatred and Mysticism for a Profit in Romania 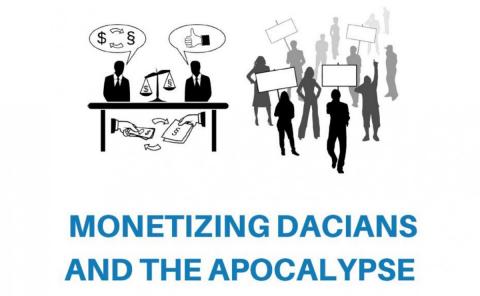 The misinformation business in Romania is elusive and difficult to measure, but click-bait content, which is funded mostly by advertising, is the norm.

A random click on an article about how neo-Marxists hate Christianity on an ultra-nationalist, xenophobic Romanian media outlet immediately displays a banner with news on the fight against the traditional family waged by George Soros, a financier and philanthropist who became the hate figure for the far-right; as well as on the dangers of chlorine-treated Chinese garlic for Germans, and on a child who fell ill after being vaccinated in hospital.

This is just one example of how creative misinformation websites in Romania can be. Dacian mysticism, mystery-miracle-conspiracy, alternative medicine, historical topics with a strong ultra-nationalist interpretation or religious ultra-Orthodox content – everything is on the table.

On the Romanian misinformation websites,

“content is often copied from mainstream media and news agencies, with a commentary at the beginning of the article, or just a changed, sensationalized title,”

according to Monetizing Dacians and the Apocalypse, a new report released today by the Center for Media, Data & Society (CMDS).

The report summarizes the findings of research that mapped a total of 108 misinformation sites identified for analysis, of which a sample of 50 were analyzed in-depth. Mainstream media and government-funded organizations have not been included in the study, even if they frequently publish misinformation.

Romanian misinformation websites can be categorized according to their ideological consistency (money-spinners vs. true believers), their operational aspects (based on staffing, ownership, and belonging to a network), and funding sources (versatility).

According to the report, it is uncommon for these sites to reveal their location, their income, or the names of their staff members. However, research shows that most of them are financed through advertising.

“Anybody who has ever clicked on a fake news item knows that the sheer amount of advertising makes it difficult to focus on content or navigate these sites,”

Dumitrita Holdis, the report’s author wrote. Banners, pop-up windows and sponsored content are so prevalent that on some websites even the contact page is unreadable.

Similarly to other countries, social media platforms are part of the media ecosystem in which misinformation content spreads in Romania. All analyzed misinformation sites use multiple social media platforms including Facebook, Instagram, Pinterest and YouTube, but also VKontakte, in some cases. “They often repost content in the case of networks (or related sites) and have active followers,” the report concluded.

The report Monetizing Dacians and the Apocalypse is published as part of The Business of Misinformation, a CMDS project aimed at keeping track of the individuals and companies that own misinformation websites and their links to institutions, parties and other individuals. The project canvasses websites that systematically and methodically create and target false information to persuade audiences to adopt ideas and ways of thinking embraced by their original promoters or their sponsors, be those political, social, economic, health-related or else.