News Media in Spain: A Battle of the Behemoths 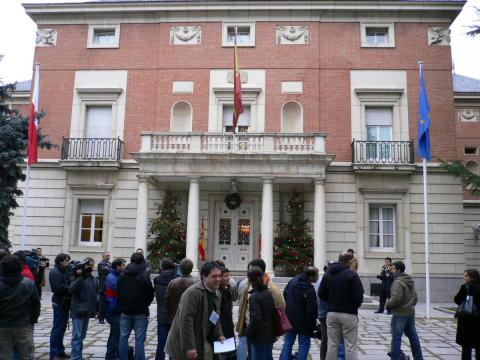 The Spanish news media industry is vibrant, with a wealth of players competing for funding and eyeballs, but at the same time it is extremely concentrated, especially financially.

In Spain, the advertising market is concentrated in the hands of a few large media groups while the government keeps pouring money into the media. Television is still the largest recipient of ad money, but the internet has been growing incessantly. At the same time, print media grapple with major financial problems.

The largest spender is the government that pumps over €2bn in media operations annually, including state subsidies given to the national public broadcaster RTVE and the network of regional public media companies, indirect state contributions disguised as taxes and advertising in the media bought with public money, according to a new report in the Media Influence Matrix series published today by the Center for Media, Data and Society (CMDS), in cooperation with the University of Santiago de Compostela (USC).

Besides money coming from the government, advertising is the other key source of funding in Spanish news media. Ad spend has been continuously increasing in the past five years: a total of €5.5bn was spent on advertising in the country in 2018, according to InfoAdex.

Nevertheless, the ad market is highly concentrated and has a tendency to further concentrate in the hands of a few big advertisers. In 2018, the 20 largest advertisers spent a combined €1.06bn, accounting for more than 28% of the total ad spend in the country, according to data from InfoAdex. The year before, the same group of advertisers spent less than €1bn and accounted for 23% of the total ad expenditures in Spain.

Television is still the largest recipient of ad money, having received almost 40% of the entire amount in 2018. Still, the total revenue of TV stations declined from €4.4bn in 2011 to €4.1bn in 2017. The two largest private television groups (Mediaset and Atresmedia) netted €206m and €339m during the period, respectively, in spite of the crisis that plagued the Spanish ad market. As the report shows, these two groups “command together nearly 56% of the television audience. Their two channels control nearly three quarters of the advertising market in Spain.”

At the same time, the internet takes an increasingly larger slice from the advertising pie each year. Between 2014 and 2018, online advertising grew by nearly 62% to €1.74bn, which is already the equivalent of 81% of the television ad spend in Spain.

The internet has had a dramatic impact on news media consumption in Spain. The time spent by Spanish citizens consuming online news has trebled between 2010 and 2017 to 118 minutes, while consumption of content on television, radio and print media has been in decline.

“The migration online has deepened the generational gaps. Younger generations have been moving fast to the internet and mobile platforms. In contrast, radio and print are primarily consumed by older people,” the report’s authors wrote.

The newspaper industry, in fact, has been the sector most disrupted by the internet in Spain, which impacts its ad revenue in all its segments, daily newspapers, magazines and Sunday publications. Overall, the sector has seen a decline in ad revenue of more than 16% between 2014 and 2018, which of course affected the financial performance of Spain’s press publishers. The 20 largest ones own 80% of all the daily newspapers registered with the local circulation audit bureau. In 2017, “only five of these groups had revenues of more than €5m from sales of daily newspapers and magazines. Most of these publishers also own radio and television channels,” the report found.

The publishing industry continues to grapple with major financial problems as circulations continue to dive and new financial models such as subscriptions or digital advertising do not offset the losses from print. Most of these publishers are working on redefining their digital strategies to adapt themselves to new media consumption habits and to the remarkable decline in ad spending in daily newspapers. They are experimenting with new forms of monetization, particularly paywalls or crowdfunding. Today, the most successful business models of the Spanish digital news media are a combination of advertising revenues and memberships or subscriptions.

The Funding Journalism: Spain report is part of Media Influence Matrix, run by CMDS through a global research and advocacy alliance, the Media and Power Research Consortium, which consists of more than 50 organizations, including academic institutions, advocacy groups, journalist networks and NGOs. The main goal of this project is to investigate the profound impact that rapid shifts in policy, funding and technology are having on journalism today. Each country report consists of three studies, covering politics and policy, journalism funding and technology.

The other two chapters on Spain, Technology, Public Sphere and Journalism and Government, Politics and Regulation are planned to be published in the upcoming months.