Attacks, Lawsuits and Media Capture: Journalism Under Assault in Central and Eastern Europe 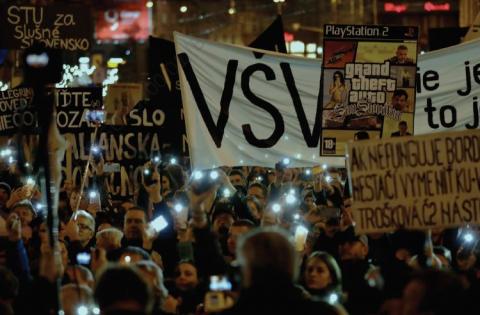 A new report by the Reuters Institute for the Study of Journalism reveals how independent journalists in Central and Eastern Europe are under attack from politicians but also from fellow journalists based at rival outlets.

Journalists operate under increasing pressure in Central and Eastern Europe. Many are threatened by lawsuits and receive personal attacks from businessmen and politicians. Others struggle to protect their sources and face the consequences of media capture in different forms. In a polarized environment, reporters often come under attack from other reporters who work for pro-government outlets and criticize their work.

These are the main conclusions of a new report, Fighting Words: Journalism Under Assault in Central and Eastern Europe, published today by the Reuters Institute for the Study of Journalism. According to their press release, the report, authored by Meera Selva, Director of the Journalist Fellowship program, is based on the results of an online survey of a strategic sample of 97 journalists working in 16 countries of the region. It also draws on a series of interviews with reporters and editors, as well as on seminars and background conversations held at the Reuters Institute.

The report arrives at a crucial point for press freedom in central and eastern Europe, the press release emphasizes. Countries like Latvia and Estonia are amongst the best ranked for press freedom worldwide. However, Poland and Hungary have dropped fast in press freedom indices. Investigative journalist Ján Kuciak, the trial for whose murder started last week, was killed in Slovakia after reporting extensively on government corruption and organized crime.

“It is clear that many of the journalists surveyed are dismayed by the vehemence of attacks they receive for their work, not just from politicians but also from other journalists. There is a real need for solidarity among journalists and it is also vital that news editors understand the pressures their reporters are working under,”

The goal of the report is to highlight how democratic norms and press freedom are being undermined within the region and come up with possible solutions. The report identifies six major areas of concern for journalists, as stated in the press release:

While all countries are covered, Hungary, Poland, Slovakia, and Bulgaria are covered in more detail: the first two as they host some of the largest media systems in the region, and the latter two as countries where journalists were killed. As the survey was in English and on a sensitive topic, Reuters Institute used a non-probability sample (convenience sample) to reach journalists from the target population. As a result, the respondents are most likely to come from digital sites and from independent news outlets, though an effort was made to reach as wide a range of journalists as possible. The results reflect only the respondents and cannot necessarily be generalized to all journalists across the region.

The surveys were accompanied by interviews with key journalists in the region, both on and off the record and complemented by a set of seminars at the Reuters Institute for the Study of Journalism and discussions with journalists participating in the Institute’s journalist fellowship program and summer schools.

On the Reuters Institute for the Study of Journalism

The Thomson Reuters Foundation is the core funder of the Reuters Institute, based in the Department of Politics and International Relations at the University of Oxford. The Institute was launched in November 2006 and developed from the Reuters Fellowship Programme, established at Oxford 36 years ago. The Institute, an international research center in the comparative study of journalism, aims to be global in its perspective and provides a leading forum for scholars from a wide range of disciplines to engage with journalists from around the world.