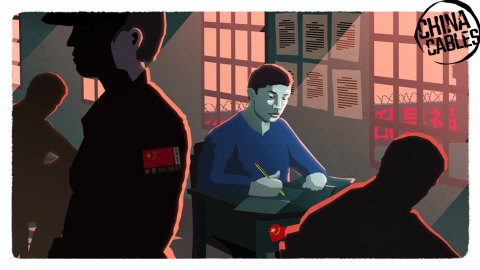 The latest project of the International Consortium of Investigative Journalists, China Cables is an investigation into the surveillance and mass internment without charge or trial of Uighurs and other Muslim minorities in China’s Xinjiang province, based on leaked classified Chinese government documents. The leak reveals the operations manual for running the mass detention camps in Xinjiang and exposes the mechanics of the region’s digital population control and "predictive policing," as well as how using a popular app can get someone thrown into a camp.

More than 75 journalists from ICIJ and 17 media partner organizations in 14 countries joined together to report on the documents and their significance. Dean Starkman, Fellow at the Center for Media, Data and Society served as the project editor of the team.

“I was so proud to be part of this project for what we were able to bring to light about the treatment of Uighurs in Xinjiang, and the surveillance and policing system. The China Cables also shows the vital importance of the collaborative model in journalism, which now proved its importance as a cornerstone of democracy. It’s a system built on trust, and that’s why we are so grateful for our partners,” Dean Starkman said.