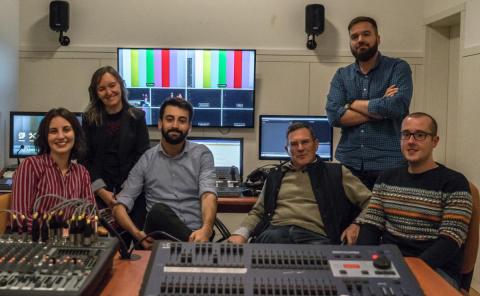 University of Santiago de Compostela (USC) is the new member of the Media & Power Research Consortium, a global collaborative network of schools, NGOs, professional organizations of journalism and private foundations brought together by their interest in pursuing a set of common research and advocacy goals.

USC is going to lead the consortium’s efforts in drafting the first Spain report in Media Influence Matrix, a research and advocacy project run by CMDS.

USC will carry out the research work for the Spanish Matrix through the Department of Communication Sciences and the Research Group “Novos Medios” (New Media). The team of researchers who will write the Spain report consists of Marta Rodríguez-Castro and Martín Vaz-Álvarez, both predoctoral researchers at the USC, and Francisco Campos-Freire, professor of Journalism at the USC. More researchers are expected to join the project team in the coming months.

“We are excited about this collaboration,” said Marta Rodríguez-Castro. “The Media Influence Matrix is an ambitious project and we hope that our research on the Spanish context will draw attention both to the particular trends in the Spanish media landscape and to the project as a whole.”

USC is one of Spain’s best higher education institutions, in the top of all university rankings. It is known in Spain and worldwide as a leading promoter of research. USC is the 2nd Spanish university by number of library seats per student and the only university in the world that is part of three UNESCO World Heritage sites, namely the city of Santiago, the Roman Walls of Lugo and the Way of Saint James.

“USC is bringing a wealth of experience and connections to the project, including its own expertise, contacts with universities across Latin America and experience in running groundbreaking applied research projects,” Marius Dragomir, CMDS’ director said.

The main goal of Media Influence Matrix is to investigate the profound impact that rapid shifts in policy, funding and technology are having on journalism today. Each country report consists of three studies, covering politics and policy, journalism funding and technology. They are published separately once they’re completed. At the moment, the project covers more than 40 countries. The reports in the Spain Media Influence Matrix chapter are slated to be published between October 2019 and May 2020.