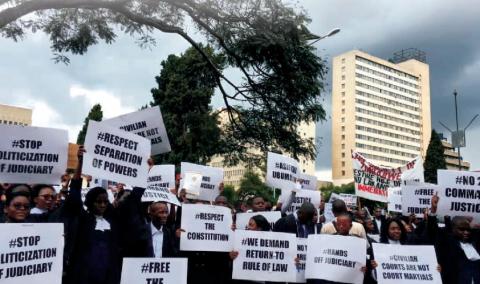 Zimbabwe claims to be open for business, but it doesn’t have much to sell. Without a vibrant civil society and media sector, that will not change soon.

The new president is famed for his trademark mantra "Zimbabwe is open for business.” In reality, however, there is no political, economic or social value to trade; and Mr Mnangagwa’s view of civil society is part of the problem.

“Civil society organizations continue to be agents of regime change on the back of foreign funding interests,” last year he told Africa CEOs Forum, an annual powwow of African decision-makers from the corporate world.

Adding salt to injury, The Patriot, a weekly mouthpiece of the ruling ZANU PF party led by Mnangagwa, often publishes articles highly critical of NGOs. A 2018 headline like “Elections: NGOs up to no good” is common in The Patriot.

"The rhetoric of President Mnangagwa through some mouthpieces of the ruling party, including state-controlled media, paint a disturbing picture that attitudes towards CSOs have hardly changed,” according to a report, issued last September, that mapped the key trends in Zimbabwe’s civil society during the past two years. 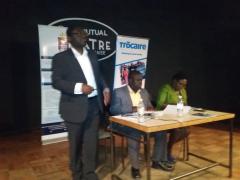 The launch of the report

Commissioned by Trocaire, the development agency of the Catholic Church in Ireland, and Zimbabwe Lawyers for Human Rights, a non-profit organization, the study acknowledged the important part played by the media in promoting democracy by covering relevant social and economic issues and by generally playing a watchdog role. The report found that “structural limitations to freedom of expression and access to information were noted to still remain” and that repressive media laws were still in place.

“Albeit the common belief that a transformation will come, I believe that the long-awaited hopes are fading,” said Clement Nyaletsossi Voule, UN Special Rapporteur on the rights to freedom of peaceful assembly and association, following a visit to Zimbabwe last month, in apparent concurrence with the study. “The population is now questioning the Government’s capacity to bring about such changes. They feel they have not experienced concrete and tangible results,” he added.

A series of meetings around the country led Mr Nyaletsossi Voule to conclude that there is “a serious deterioration of the political, economic and social environment since August 2018 resulting in fear, frustration and anxiety among a large number of Zimbabweans.”

Media reform, in particular, is advancing in slow motion, if at all.Zimbabwe Broadcasting Corporation and Zimpapers, the largest newspaper publisher still remain under strict government control through board and editorial appointments. The establishment of community radio broadcasting has remained at the empty promises stage for almost a decade.

Despite some draconian media laws being repealed, local journalists and media experts feel that some other laws are being smuggled through the backdoor, thus bringing some short-lived excitement to an end. Civil society groups lobbying for media reforms actively participate in public hearings to police such distortions.

“The gazetted ZMC Bill falls far short of expectations on the media industry. […] Key recommendations left out included decriminalization of the media profession, recognition of media self-regulation as part of co-regulation model for Zimbabwean media and removal of interference in ZMC operations” through entrenched ministerial powers, VMCZ wrote in a statement.

Stressing that the country was on the verge of missing a great opportunity to implement authentic media reforms accepted locally and globally, VMCZ asked the government and parliament to embark on a holistic process to reform media laws, emphasizing that the current attempt “will do nothing to sanitize the undemocratic regulation that Zimbabwe's media has endured for nearly two decades.”

Thumbs up to Social Media

Some hope might be on the horizon. The study from Trocaire and Zimbabwe Lawyers for Human Rights found that social media helped civil society groups to continue operating in the increasingly volatile post-November 2017 environment. The report celebrated that alternative media space has not been restricted that much, except during the unprecedented January 2019 Internet Shutdown during violent demonstrations against the skyrocketing cost of basic goods. Therefore, a series of cybersecurity laws envisaged by the government are much dreaded in the country.

For Zimbabwe to become a country truly “open for business,” the report recommended the government and its international funding partners to create an everlasting conducive environment for civil society and businesses to operate.

That would probably restore an enviable legacy loudly yearned for in November 2017.

John Masuku is a Zimbabwe-based broadcast journalist and Executive Director of Radio Voice of the People (VOP). He is a fellow of the Center for Media, Data and Society (CMDS) at the CEU in Budapest, Hungary. John can be contacted on jjwpmasuku55@gmail.com or via Twitter at @john_masuku