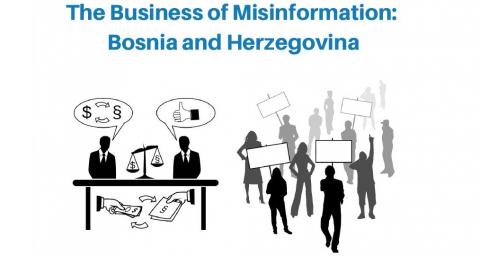 The fake news phenomenon hasn’t spared the Balkans. In Bosnia & Herzegovina, it fuels a lucrative industry.

Many people have a somewhat morbid habit to read about death and dead people, which explains why obituaries or crime articles are popular. When killing is involved, these stories are even more gripping, getting more eyeballs. Originalno.org, a website in Bosnia & Herzegovina, seems to know that very well, publishing every day an article about the death or murder of a famous person. The only problem is that these articles, like anything else on Originalno, are fake.

Readers couldn’t be bothered less. Originalno is only one of the many bogus websites that have spread across Bosnia & Herzegovina, a small Balkan nation of 3.5 million.

“Misinformation websites that publish untruthful information and manipulate facts have spread at a rapid pace in the past decade helped by the advance of new technologies, raising serious political problems,”

Semir Dzebo wrote in “Lying for Profit,” a report from the Center for Media, Data & Society (CMDS) released today.

Dzebo’s research work, aimed at unearthing ownership and financial data about the misinformation websites catering to Bosnian audiences, found that the majority of these websites are motivated solely by profit, which is generated mostly through AdSense, the ad sale program owned by the tech giant Google.

Highly concerning is the habit of established media outlets to increasingly engage in misinformation practices as a way to attract more readers or as they try to please the politicians who support them.

“Lying for Profit” was published as part of The Business of Misinformation, a CMDS project aimed at keeping track of the individuals and companies that own misinformation websites and their links to institutions, parties and other individuals. The project canvasses websites that systematically and methodically create and target false information to persuade audiences to adopt ideas and ways of thinking embraced by their original promoters or their sponsors, be those political, social, economic, health-related or else.