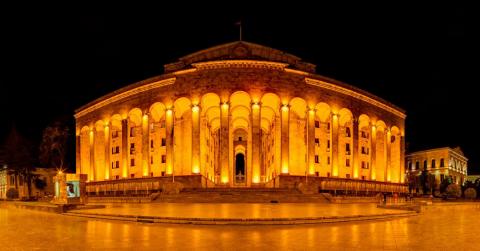 Georgian independent journalism is struggling in a highly politicized media industry where the government and a few wealthy businesspeople call the shots.

To describe the power dynamics in the Georgian media, one would not need much space. Two families, two brothers and the government control, own or fund most of the media in Georgia, according to a new report from the Center for Media, Data & Society (CMDS).

The brothers Levan and Giorgi Kharamanishvili, two local entrepreneurs, and the Patarakatsishvilis and Tseretelis, two wealthy families, control the four largest television operators in the country, which together command the bulk of television audience, nearly 65% combined.

The government retains a strong position, too, mostly thanks to public funding used to finance media outlets. In 2018, the Georgian government plunked down some US$ 20.5m for GPB, the country’s flagship public service broadcaster. It spent another US$ 2.7m to buy space in private media, roughly 56% of that going to finance private television channels, with the two leading commercial stations TV Imedi (owned by the Patarakatsishvilis) and Rustavi 2 (owned by the Kharamanishvili brothers) snapping up most of the contracts.

Add to that a thicket of political links and you have an environment that hardly enables independent journalism and media to thrive.

The irony is that although demand for news content is high and growing, and the internet penetration is constantly rising, news producers in Georgia are barely turning a profit. The ad market has decreased in recent years and most of that revenue is pulled in by the few large players and global tech giants. Print media in particular has been hit hard, grappling with dwindling circulations and ad revenue. Once-popular newspapers abandoned print and moved entirely online.

But the industry’s hopes that the internet will provide the solution are quickly dashed. No business strategy has worked to date. Giorgi Jangiani, the report’s author wrote: “[…] It’s not only newspapers that are struggling to monetize their digital products. News portals that started online and have only an internet presence are also under the cosh.” The small size of the Georgian market, for example, is an obstacle to subscription-based models.

Some of the major publishers have been experimenting with various, yet untried, models. Palitra Holding, publisher of Georgia’s best-selling non-tabloid weekly, Kviris Palitra, has tried to lure readers with packaged products such as discounted packages of books and newspapers.

Philanthropies try to fill the gap, spending part of their grant money on public service journalism such as investigative reporting initiatives and news media. But their contributions, although helpful, are far from sufficient to solve the sector’s woes.

In all, local media are by a long chalk in the worst predicament in Georgia. The local media market (outlets operating outside the capital Tbilisi) was valued at only US$ 1m in 2018, which is a fraction of the overall media spend. Financial problems send many of these outlets into bankruptcy. Revenue from political advertising helps some of them, but those funds come only when politicians go out on the hustings. Moreover, only a small proportion of political ad spending goes to local outlets as politicians seek big exposure through large media companies.

The latest technological advances could be a game-changer, experts say. Artificial Intelligence (AI), Virtual Reality (VR) or image-recognition software could enable media to engage the audience in forms never seen before in Georgia as a way to find new sources of revenue.

In a highly politicized, dysfunctional media market, as Georgia is today, there seems to be no other way forward.

The Funding Journalism: Georgia report is part of Media Influence Matrix, run by CMDS through a global research and advocacy alliance, the Media and Power Research Consortium, which consists of more than 50 organizations, including academic institutions, advocacy groups, journalist networks and NGOs. The main goal of this project is to investigate the profound impact that rapid shifts in policy, funding and technology are having on journalism today. Each country report consists of three studies, covering politics and policy (already published), journalism funding and technology.

The last chapter on Georgia, covering technology, journalism and public sphere is planned to be released in October 2019.