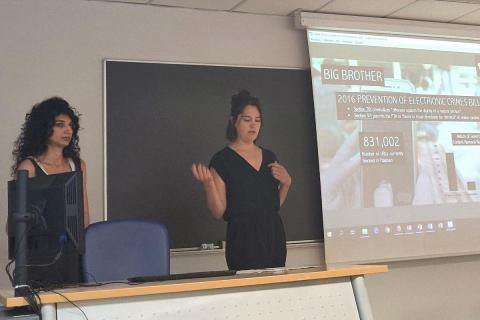 Mackenzie Nelson and Ifra Asad launched in Madrid the report they wrote as part of their class at CEU.

On 6 July 2019, CEU School of Public Policy (SPP) graduates Mackenzie Nelson and Ifra Asad presented in Madrid the findings of their research into the impact of technology journalism and media in Pakistan in Madrid. The presentation took place at the International Association for Media & Communication Research (IAMCR) conference, the biggest powwow of the media research world.

Nelson and Asad spoke at “Research, Evidence, and Democratic Governance of the Media Sector,” a pre-conference event organized by the Center for International Media Assistance (CIMA) and the CEU Center for Media, Data and Society (CMDS). 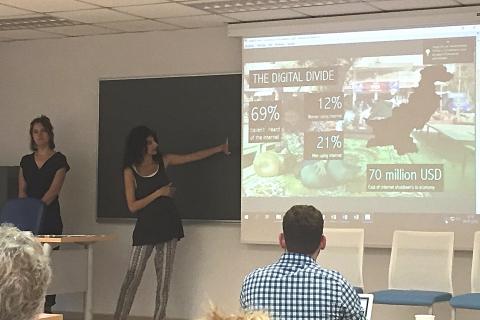 Nelson and Asad spoke about some of the key findings of their work, including the impact of low internet penetration rates in Pakistan (surprising given the relatively higher regional average); the intense state censorship; the looming threat of Chinese style surveillance, given the ongoing China-Pakistan Economic Corridor initiative; and the complicity of social media giants in propagating this increasingly authoritarian internet culture.

The research was referenced in other panel discussions that took place in the same event, which brought together researchers, scholars and activists from a variety of countries including South Africa, Sri Lanka, the U.S. and the U.K., and organizations such as the Center for Internet and Society, the Committee to Protect Journalists (CPJ) and Verité Research. The topics covered by the discussion included regulation of digital platforms, the relation between donor funding and the politics of public broadcasting reform in South Africa and the role of research in promoting media ethics in Sri Lanka.

A working group of scholars and media development experts at the end discussed actionable follow-up plans.

The event was a lead-up to the annual IAMCR conference, which this year had 1,785 registered participants from 83 countries and five continents. The theme of the IAMCR 2019 conference was “Communication, Technology, and Human Dignity: Disputed Rights, Contested Truths.”

Nelson and Asad carried out their work for their report, “Technology, Public Sphere and Journalism: Pakistan” as part of their work in the CMDS Practicum class at SPP. In writing the report, they used the methodology from the Media Influence Matrix, CMDS’ flagship research and advocacy project that covers more than 50 countries worldwide.