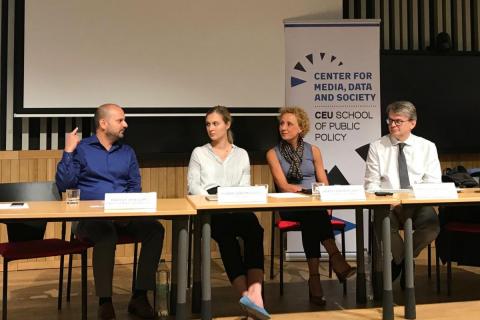 There are some positive developments regarding press freedom in Central and Eastern Europe, but they are commonly offset by negative factors. There is a declining respect of media freedom and a lack of transparency in media ownership. Digital attacks on journalists are more and more widespread, and the independence of national media regulators is deteriorating. These were the most important takeaways of a discussion on regional trends in freedom of expression organized at the Center for Media, Data and Society.

Across the world, journalism is under fire, said Flóra Garamvölgyi, journalist of Népszava, moderator of the event in her introduction. According to UNESCO’s report World Trends in Freedom of Expression and Media Development, while more individuals have access to content than ever before, the combination of political polarization and technological change have facilitated the rapid spread of hate speech, misogyny and unverified fake news, often leading to disproportionate restrictions on freedom of expression. 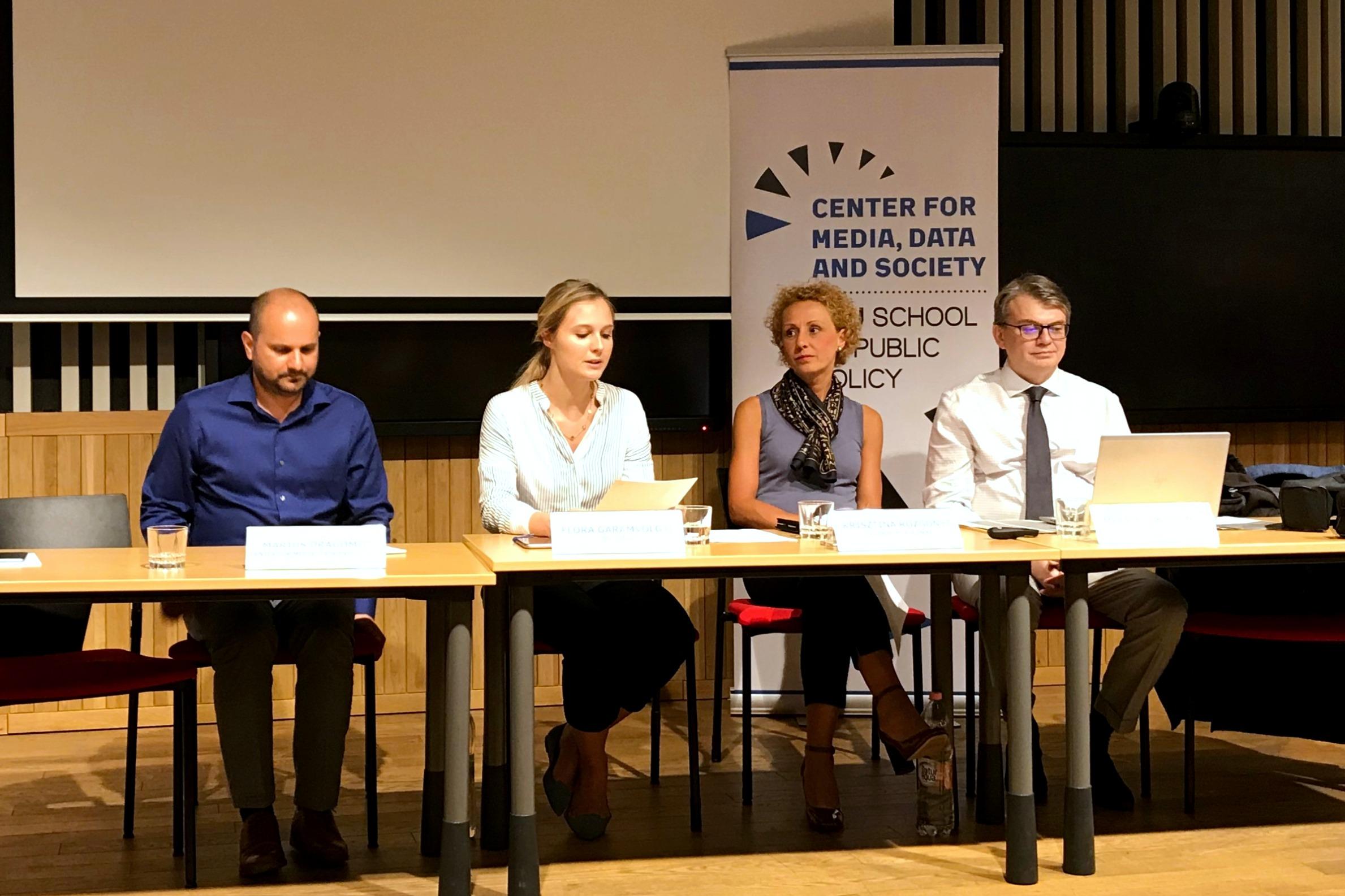 After the introduction, Flóra Garamvölgyi introduced the speakers: Krisztina Rozgonyi, regional and thematic researcher of the report, Marius Lukošiūnas, Program Specialist at UNESCO’s Division of Freedom of Expression and Media Development, and Marius Dragomir, Director of Center for Media, Data and Society.

In his presentation Marius Lukošiūnas mentioned that “UNESCO is part of the big UN family”, freedom of expression is their mandate, member states and journalists are their target groups, and civil society and media are their partners. However, due to the diversity of member states, “explaining why access to information and freedom of expression is important is challenging sometimes”, he added.

In short, press freedom is pulled forward in some respects, but various factors are pulling it backwards. 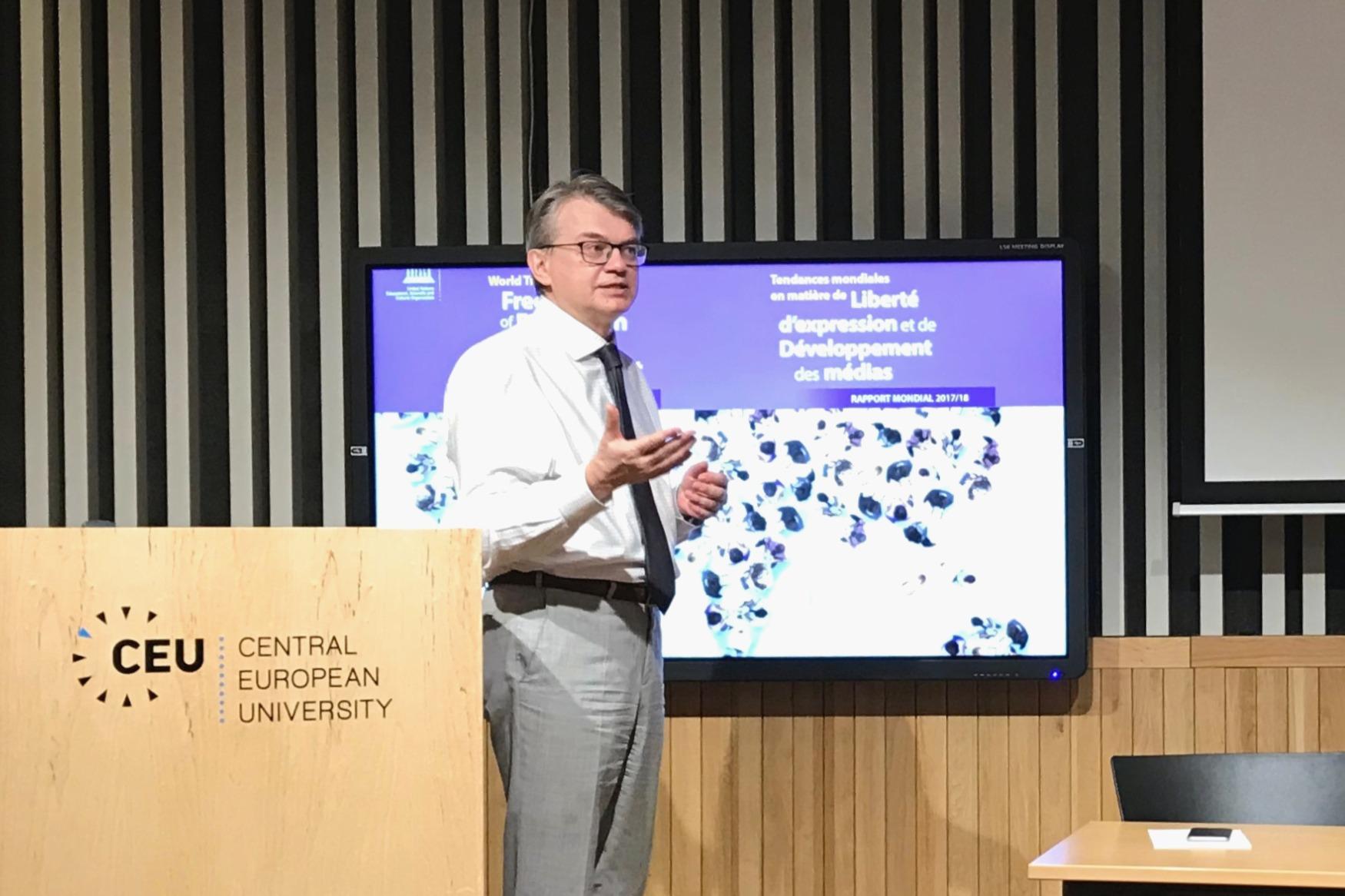 Krisztina Rozgonyi looked at the four aspects in a regional perspective in her presentation. The region consists of 25 countries; 22 of them are member states in the Council of Europe, 11 in the EU, plus there are four candidates as well. She mentioned a regional paradox: standard interpretive categories to study social and political realities are not very much useful here. As she said:

“In some democracies democratic features are under fire.”

The report writes about some positive developments, but they are commonly offset by negative factors: free press is in decline, public service media is often under attack. There is a declining respect of media freedom: the researchers observed civil law violations to restrict it. Digital attacks on journalists are more and more widespread. There is a persistent lack of transparency, previous economic models have collapsed and there are emerging trends of multi-sectorial ownership, with media owners having vested interest in other fields and exercising pressure on editorial content, and (re-)expansion of the State, with an unfair distribution of state advertising.

In addition, the independence of national media regulators is deteriorating, the researchers often observed self-censorship, media capture and insufficient international safeguards, which altogether have led to a drastic decline in trust in media. 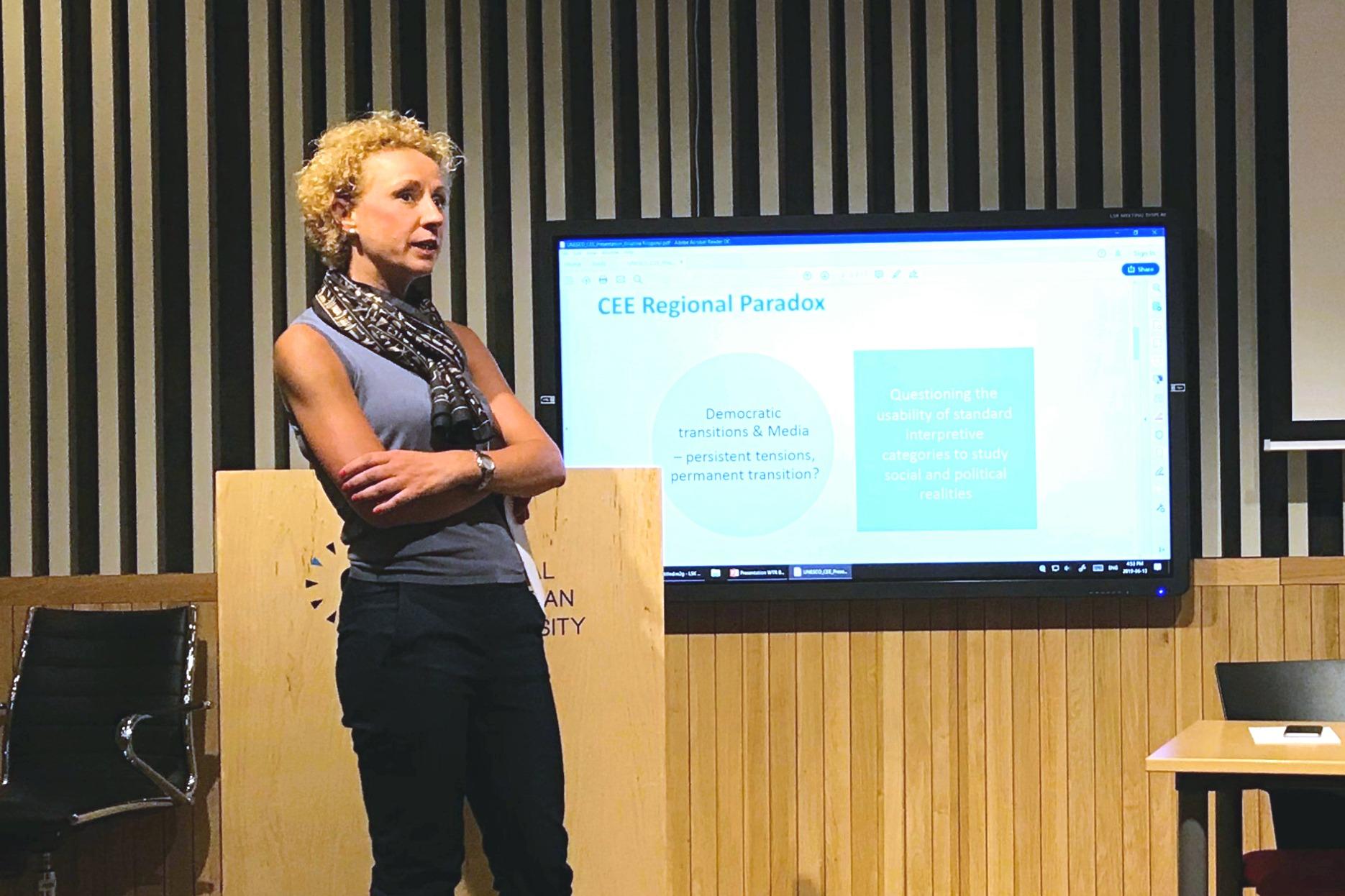 The situation regarding the safety of journalists “could have been even worse”, Krisztina Rozgonyi said. The number of murdered journalists have slightly decreased between 2012 and 2016, but this does not mean that the region is safe: online harassment emerged as a worrying trend. Especially female journalists are targeted and most cases have remained unresolved in legal terms.

Overall, Krisztina Rozgonyi described the region as a dark chapter, where there is an increasing necessity for vigilance by the international community.

Referring to the case of Ivan Golunov, Flóra Garamvölgyi asked the participants about when and why did journalism become a dangerous job. According to Marius Lukošiūnas, it has always been one, as journalists are trying to uncover issues some others want to hide. However, as Krisztina Rozgonyi added, now there are platforms to talk about such issues, the world is listening, and that’s the biggest change: there is an increasing political will to protect journalists. This has become a central issue for the reputation of every state, Marius Lukošiūnas continued: it is connected to international politics and investments.

Marius Dragomir warned the audience against a very dangerous trend: we see journalists being attacked in our region, and we didn’t see this before. There were no journalists killed in this region for a long while. The rise of cross-border investigations means that there are more people interested in trying to stop journalists. However, as these people want to kill the news and not the person, it is getting more and more impossible. Still, we shouldn’t forget that although murder is the most extreme form, there are other forms of aggression as well, which can affect the work of journalists very badly. 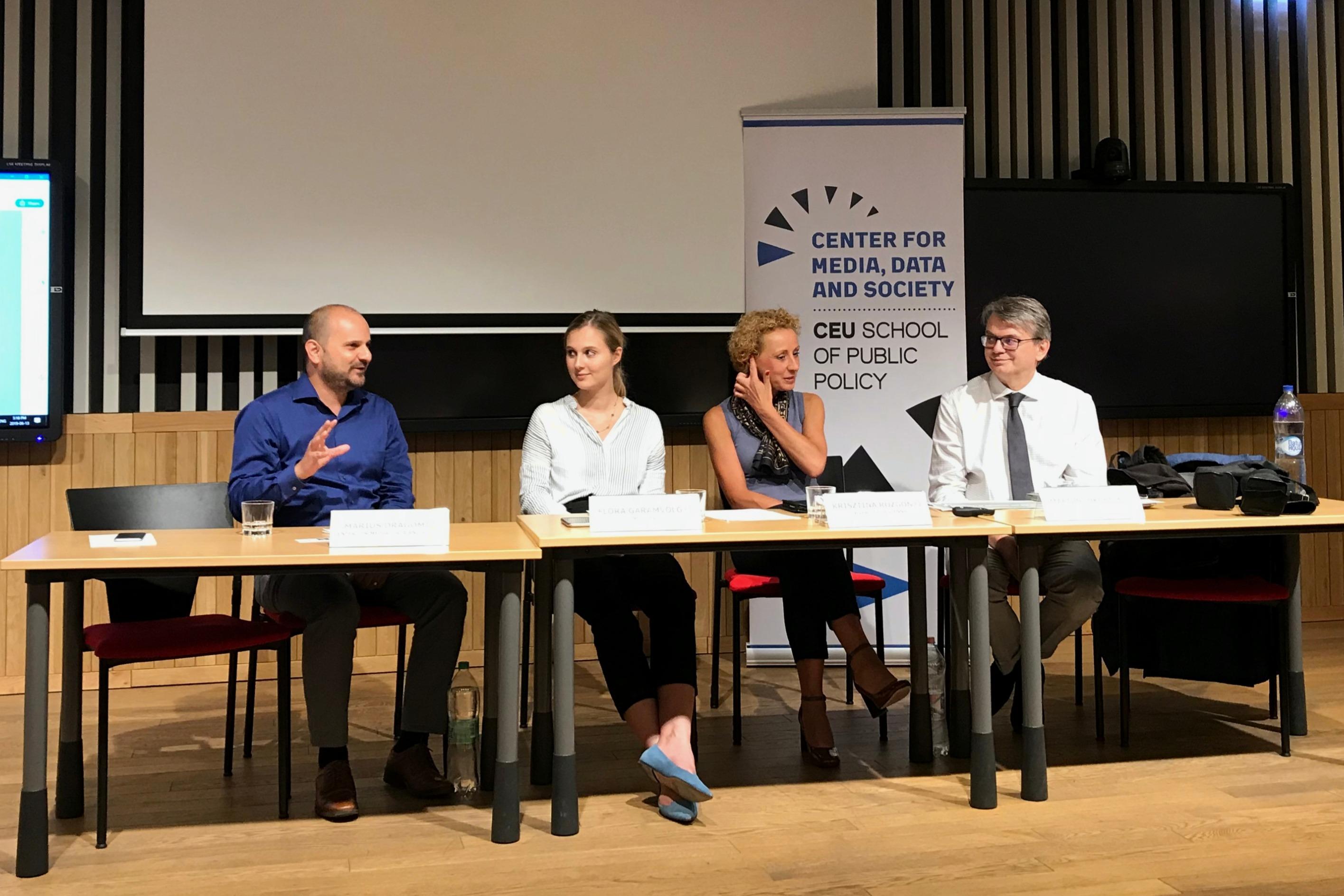 Referring back to the presentations, Flóra Garamvölgyi also asked about the digital safety of journalists. According to Krisztina Rozgonyi, “first we have to be aware” that this threat exists. Digital safety is usually about implementation of existing laws, but it is something “we have to be concerned about”.

It is the responsibility of states to ensure the safety of every citizen, Marius Lukošiūnas added. As he said, “sometimes people don’t realize that digital safety of journalists is extremely important” for them to be able to carry out their job. But, according to Marius Dragomir, we have to be realistic: it is important to be preventive and to make sure that there are protocols in place. It is difficult, because it costs money, but “we shouldn’t rely too much on governments”, he said.

It is not a new phenomenon, but the amplification is different, Marius Lukošiūnas replied to Flóra Garamvölgyi’s question about fake news. According to him, there is one big problem connected to this issue: it has no clear definition. There is a danger in using a term that doesn’t have clear legal, professional boundaries, so UNESCO uses misinformation and disinformation instead.

Krisztina Rozgonyi agreed that it was a useful categorization. She is also worried because digital technology enables attacks on news integrity as well, mentioning the deepfake video about Nancy Pelosi as an example. It affects trust in the media, which she considers as the biggest issue. She thinks that “there is a lot to do in terms of policy responses, maybe even legal responses”.

Nevertheless, when it comes to legal responses, Marius Dragomir sees a worrying trend: some countries use laws against “fake news” to restrict freedom of expression and imprison journalists. He also thinks that journalists and researchers spend too much time and resource to study this phenomenon, which is disproportionate, because they rarely look at the context or try to understand the media landscape in which misinformation flourishes. (This is what CMDS investigates in the Business of Misinformation project.)

According to him, it is also dangerous that in some countries there is misinformation in mainstream media as well, not only on fringe websites. That is why Krisztina Rozgonyi thinks that the most important task is to somehow bring back the trust in news reporting. 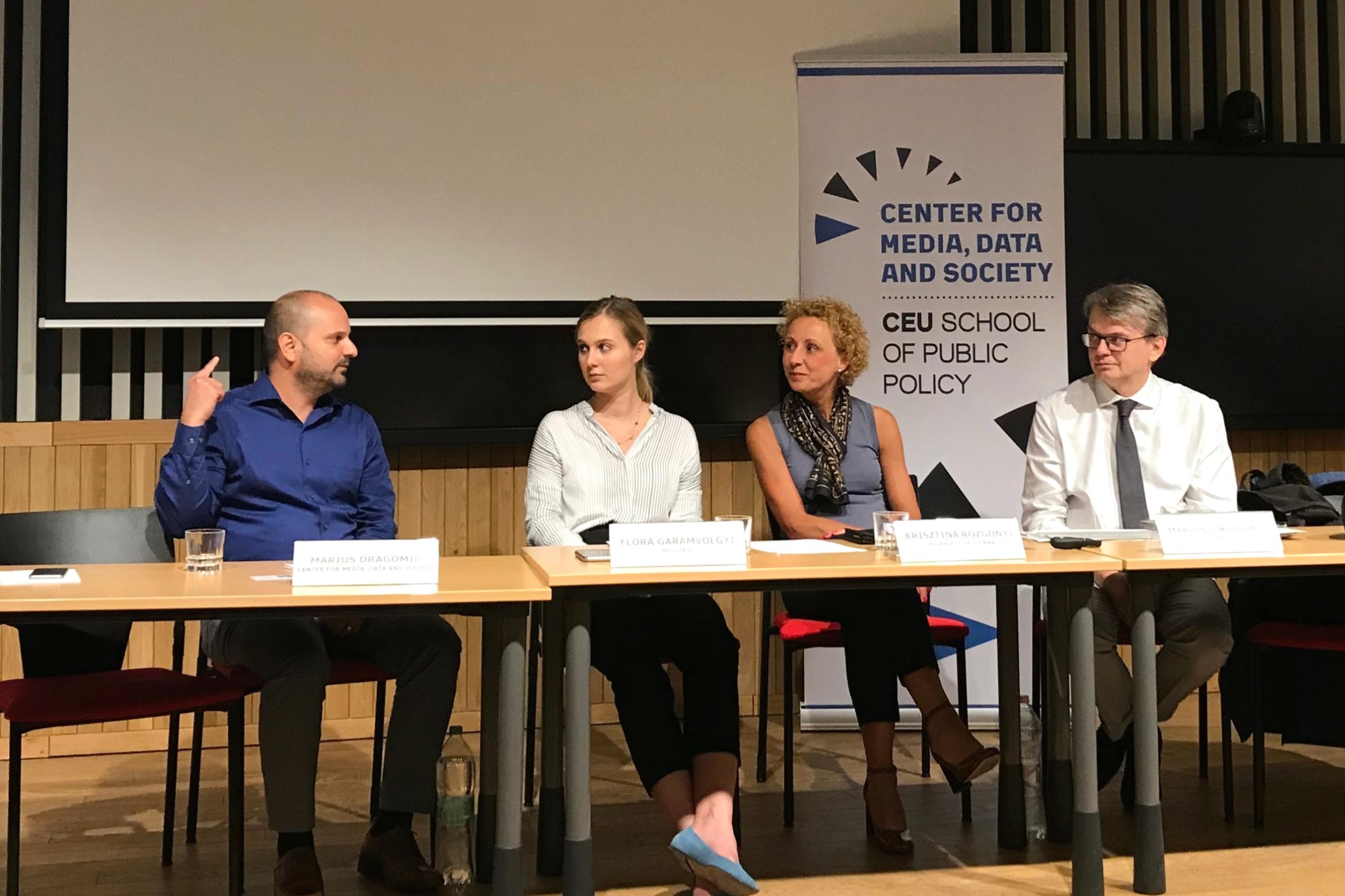 Flóra Garamvölgyi also asked the speakers which hot topics they would cover if they worked for outlets spreading misinformation. Marius Dragomir thinks that Russian-funded websites are becoming very spot-on, so he would “take advice from them”. Krisztina Rozgonyi would focus on migration and refugees in Budapest, and on the Strache-video in Vienna. The hot topics of Marius Lukošiūnas would be “the Eastern neighbor” in Lithuania, and the Yellow West movement in Paris.

Krisztina Rozgonyi reminded the audience that the language journalists use also matters. She mentioned the refugee crisis in Europe, in which “quality media also failed big time”, and they helped certain governments to establish their narratives, which also included a silence about certain aspects, for example female refugees, which resulted in the disappearance of some parts of reality from the media.

Marius Lukošiūnas agreed that this was an absolutely critical issue, adding that “we create our bubbles, with an own bubble language”, so, it is not as simple as it used to be. Nevertheless, Marius Dragomir believes that journalists have to stick to a set of principles. If they don’t, then it is “bad for their profession”.