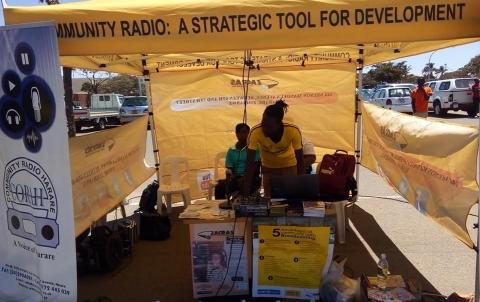 The community radio sector has been flying high in most of Southern Africa, but remains grounded in Zimbabwe as politicians, seeing foreign conspiracies everywhere, fear loss of control in the media.

In the past decade, Zimbabwean information ministers have dismally failed to fulfill their promises to license community radio stations, irking supporters and promoters.

But the Zimbabwe Association of Community Radio Stations (ZACRAS), an umbrella body of local initiatives coming from all of the country’s provinces, is not giving up, relentlessly lobbying regulators, political parties and MPs to speed up the licensing process.

Their efforts have so far run into the sand, leaving the Zimbabwean community radio sector much behind other Southern African nations. But as media reform continues at full speed in Zimbabwe, community radio advocates should regroup and renew their push for a strong community media sector.

Today, most Southern African countries, except for Zimbabwe and Eswatini (formerly Swaziland), have a vibrant community radio sector whose history harks back to the dawn of the millennium. Surprisingly, governments in these countries have helped facilitate the emergence of the community radio sector by creating an environment enabling them to operate, without any desire to own or control them (which is, indeed, unusual for some governments in the region).

Today, South Africa’s community radio sector boasts some 165 stations whereas Zambia has 85 of them. Mozambique, Malawi, Botswana and Tanzania also made enormous strides.

A ray of hope appeared in Zimbabwe when a new “open-for-business” government of President Emmerson Mnangagwa took over the country’s helm in November 2017 after a nearly four-decade long rule by Robert Mugabe whose leadership wrecked the country and created a repressive media environment.

Hopes for a genuinely diverse media industry, which would include newly licensed community radio stations, ran high when the newly appointed information minister Monica Mutsvangwa presented last fall her first 100-day plan. But the days are gone and nothing has changed.

Perplexingly, the government bragged in the state media that community radio channels have been licensed, referring, in fact, to commercially funded regional radio operations, controlled jointly by the government, the ruling party and local entrepreneurs. Community radio supporters went through the roof.

“Government has not done anything yet,” Perlagia Kapuya, ZACRAS’ chairperson, told Daily News, a newspaper in Zimbabwe.

“There is little to celebrate in a country where there is not even a single community radio licensed to broadcast since independence.”

Vivienne Marara, a coordinator with ZACRAS, said that the first basic step towards implementing a community radio strategy is to publish a timeframe for the process. Secondly, the government should publish a list of frequencies available for community radio stations. “If we are able to get [this list], we [can] then lobby from a well-informed position,” Marara said.

Audience research shows that radio is still the most widely accessed medium in Zimbabwe, especially in rural areas. Nick Mangwana, secretary for the information ministry, says that communities are the real “drivers of development,” which is a reason why the government fully supports the community radio sector. Building a community radio sector will simply help the government develop communities “in a devolved way,” Mangwana said.

In his view, Zimbabwe needs a three-tier broadcast system consisting of commercial, public and community media. Mangwana promised that the community radio licensing will be a fair process handled by the Broadcasting Authority of Zimbabwe (BAZ), the country’s audiovisual watchdog. He promises that the government will not interfere.

There is increasing evidence of the value of community radio (or the consequences of its absence). When the cyclone Idai left a trail of deaths, destruction and trauma in eastern parts of Zimbabwe last March, many lamented the absence of community radio channels, which could have warned people about the looming danger.

Generally, during the post-disaster efforts to rehabilitate areas destroyed by natural disasters, foreign media fly in to capture the moment, but once the hype is gone, community radio should be there to report on what’s most important for these communities: reconstruction efforts.

At a recent workshop in Harare, the Zimbabwean capital city, the author of this article said that the fights for claims that erupted among gold panners following the mine shaft collapses in the wake of the Idai cyclone could have been tempered if these communities had radio stations covering them.

During the workshop, which was also attended by MPs, experts explained that the community radio is best positioned to cover topics such as human rights, environment, health, poverty and gender-related issues because they have the local expertise and can air in the languages spoken by these communities.

However, some politicians from the governing Zimbabwe African National Union-Patriotic Front (Zanu-PF) party are suspicious, believing that the community radio lobby is part of a regime change agenda as ZACRAS receives funding from international donors, which some Zimbabwean politicians see with skepticism.

But journalists and more independently minded politicians agree that it’s time for Zimbabwe to catch up with its more progressive neighbors and build a strong community media field.

Giving a Voice to the Voiceless?

Examples of successful and influential community radio were scarce decades ago. But today, there is no shortage of models.

Last spring, thanks to support from the local office of Amnesty International and ZACRAS, teams of journalists and community volunteers went to Kenya and Zambia to learn from the successes of the community radio stations there. During the visit, Mvelo Zondo from Ntepe Community Radio, a still-to-be licensed initiative from a cattle breeding area in southern Zimbabwe, learned how radio stations can move away from donor dependence to become financially sustainable by using locally available resources, primarily advertising and sponsorship revenues.

On the African continent, South Africa is often given as an example.

“South Africa is rare, if not unique, among African countries in its swift provision of financial and logistical support for the establishment of community or alternative media,”

said Gift Mambipiri, a media researcher, formerly ZACRAS’ board chair. The Media Development and Diversity Agency (MDDA), a Johannesburg-based government-industry partnership, played an important role in the process by capacitating some community radio initiatives across South Africa through training workshops and startup capital.

At global level, the World Association of Community Radio Broadcasters (AMARC), with 3,000 members in 110 countries, put forward a set of basic best practices guiding community broadcasting. But instead of using these principles to build a basis for community radio development, the Zimbabwean authorities chose to arm-twist ZACRAS and other community radio supporters over trivial issues (such as what constitutes a community or how to define a community radio station) to further delay the licensing process and gain an upper hand in ownership and control.

Creation of a community radio sector in Zimbabwe was not possible in the early 2000s. But it is possible now and Zimbabwe is obliged under international law to protect the right to freedom of expression of everyone in the country, especially those communities marginalized by mainstream media, according to Amnesty International. Building a resilient and diverse community radio field could be an answer to that.

John Masuku, a broadcast journalist and media trainer, is the Executive Director of Radio VOP in Zimbabwe. He is a fellow of the Center for Media Data and Society (CMDS) at the Central European University (CEU) in Budapest, Hungary. John can be contacted on email: jjwpmasuku55@gmail.com, Twitter: @john_masuku, Skype: john.masukuskype