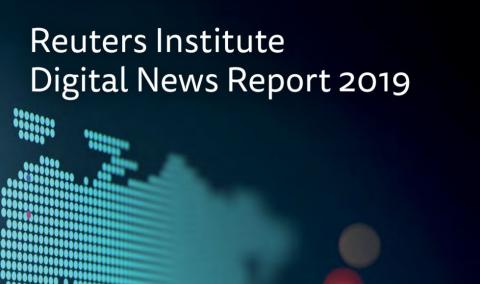 This year's report, surveying 75,000 people in 38 countries, looks at trust, concern over misinformation, news avoidance, populism's impact, top brands, how people access news and much more. The Hungarian chapter was written by Eva Bognar, Senior Program Officer and Researcher at Center for Media, Data and Society.

Public concern about misinformation is making some people more careful about the brands they choose and the content they share online, according to the eighth annual Digital News Report from the Reuters Institute for the Study of Journalism at the University of Oxford. The report, which is based on a YouGov online survey conducted with 75,000 people in 38 markets, says that changing behaviour is most apparent with those that are younger and better educated, rather than older or less privileged groups.

While some consumers may be turning to more credible news sources, the report has mixed news for publishers looking for sustainable business models after decades of digital disruption. Paid online models are starting to work in some countries, but mainly for a few big publishers.  Single title subscriptions, it argues, are unlikely to work for many consumers, who wish to access multiple brands in a frictionless way or do not see sufficient value in paying for news at all.

Public concern about misinformation remains extremely high (55% average across 38 countries) and has grown significantly over the last year in some countries, despite the attempts of platforms and governments to contain it.

Q_FAKE_NEWS_1. Please indicate your level of agreement with the following statement. – Thinking about online news, I am concerned about what is real and what is fake on the internet. Base: Total sample in each market ≈ 2000, Taiwan = 1005.

One consequence of this concern seems to be a greater awareness and affinity with trusted news brands. Across countries over a quarter (26%) say they have started relying on more ‘reputable’ sources of news – rising to 40% in the US. A further quarter (24%) said they had stopped using sources that had a dubious reputation in the last year. (The interpretation of ‘reputable’, ‘less accurate’, ‘dubious’, and other subjective terms were left to respondents to determine.)

Apart from the young, behaviour seems to have changed most in countries where concern about misinformation is highest. Almost two-thirds (61%) in Brazil and 40% in Taiwan said they had decided not to share a potentially inaccurate story in social media after recent elections that were marked by misinformation – compared with just 13% in the Netherlands, the country with the lowest level of concern in our survey.

The report also reveals patterns of social media use that are significantly different in the global South. Whereas social media, especially Facebook, are dominant in many western countries, the messaging application WhatsApp has become a primary network for discussing and sharing news in Brazil (53%) Malaysia (50%), and South Africa (49%).  People in these countries are also far more likely than in the West to be part of WhatsApp groups with people they don’t know - a trend that reflects how messaging applications can be used to easily share information at scale, potentially encouraging the spread of misinformation. Meanwhile public and private Facebook Groups discussing news and politics are also popular in Turkey (29%) and Brazil (22%) but are much less used in Western countries such as Canada (7%) or Australia (7%).  Report lead author Nic Newman:

“The move to private and group-based messaging has happened really fast. It offers more control for users but also makes it harder to spot and counter misinformation – especially in countries with lower digital literacy, a weak media or less robust institutions.” 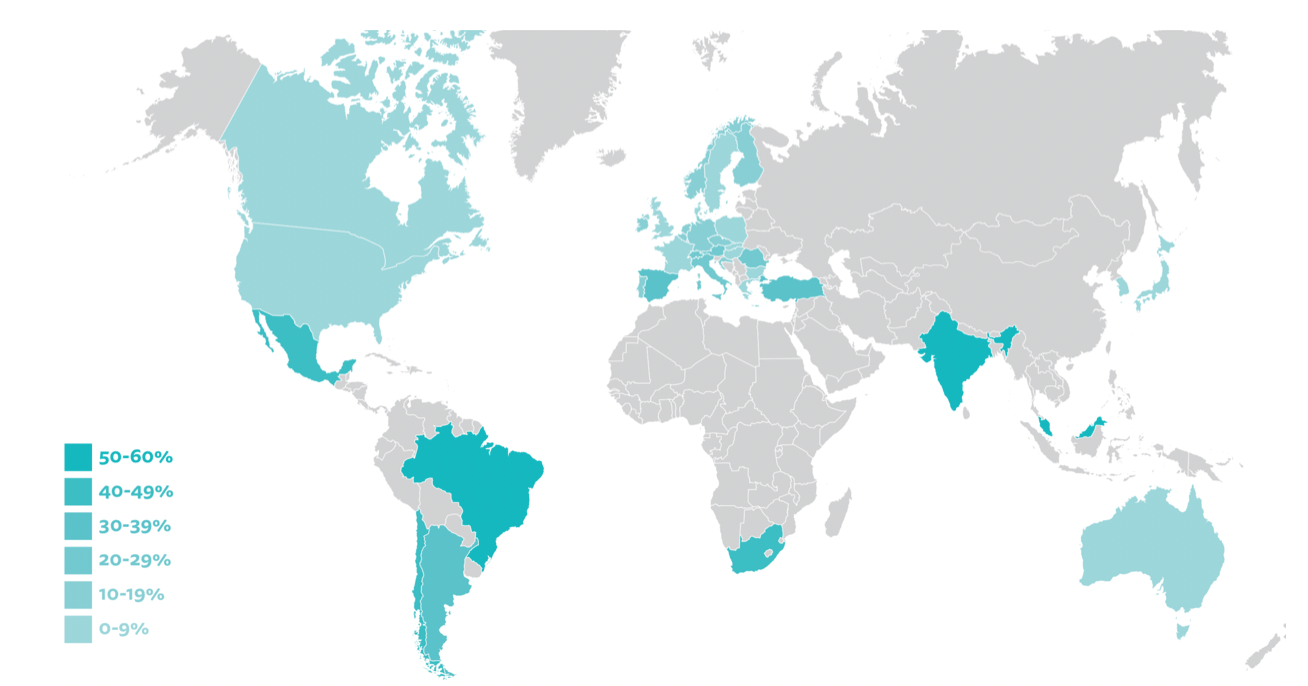 Q12B. Which, if any, of the following have you used for news in the last week? Showing WhatsApp code. Base: Total sample in each country. *India poll conducted Jan 2019 with English-speaking, online news users in India – a small (but important) subset of a larger, more diverse, and very complex Indian media market

The report also reveals how online users in many countries are spending more time with WhatsApp, Instagram and YouTube than this time last year. Few users are abandoning Facebook entirely, though, and it remains by far the most important social network for news.

The business of journalism

Despite the efforts of the news industry, we find only a small increase in the numbers paying for any online news – whether by subscription, membership, or donation. Growth is limited to a handful of countries mainly in the Nordic region (Norway 34%, Sweden 27%) while the number paying in the US (16%) remains stable after a big jump in 2017.  Even in countries with higher levels of payment, the vast majority only have ONE online subscription – suggesting that winner-takes-all dynamics are likely to be important. One encouraging development is that most payments are now ‘ongoing’, rather than one-offs.

In some countries, subscription fatigue may also be setting in, with the majority preferring to spend their limited budget on entertainment (Netflix/Spotify) rather than news. With many seeing news as a ‘chore’, the report suggests that publishers may struggle to substantially increase the market for high-priced ‘single title’ subscriptions.

“The good news is that those publishers who produce truly distinct, valuable, and trusted journalism are increasingly being rewarded with commercial success. The bad news is that many people find that much of the journalism they come across is neither valuable, trustworthy, or worth paying for.”

As more publishers launch pay models, over two-thirds (70%) of our sample in Norway and half (50%) in the United States now come across one or more barriers each week when trying to read online news. The fear is that increased friction could put people off news entirely, especially those who are already under-engaged or can’t afford to pay.

Pivot to audio picks up pace

Podcasts appear to be reaching critical mass as a consequence of better content and easier distribution. Over a third of our combined sample (36%) now say they have listened to one or more podcasts in the last month, with almost one in six (15%) saying they have consumed one about news, politics, or international events.

Audio prospects may be further boosted by the rapid adoption of voice-activated speakers such as the Amazon Echo and Google Home. Reach for any purpose has grown from 7% to 14% in the UK over the last year, from 9% to 12% in the United States, and from 5% to 9% in high-tech Korea. However, the proportion using smart speakers for news is declining as mainstream audiences come on stream. Less than four in ten access any news via their device in an average week in the US (35%) and UK (39%) and just a quarter in Germany (27%) and South Korea (25%).

Other headlines from this year’s report

According to the introduction, which describes the environment in which the survey was conducted and in which the data should be interpreted, in captured media environments such as Hungary, political power tends to be reflected in the structure of the media market. Government allies strengthened their grip on the media market last year through acquisitions and mergers, distribution of state advertising and subsidies, control over public service media, and smear campaigns against critical journalists, the introduction of the chapter says. The most significant change on the market was the creation of a new Central European Press and Media Foundation, merging a total of 476 media companies – with donations from many of the owners of the biggest pro-government groups.

Investigations into the wrongdoings of oligarchs and politicians are conducted by independent journalism outlets, but are rarely followed up by police investigations or covered by pro-government media including the public service broadcaster. Because of the structure and nature of the Hungarian media environment, significant segments of the audience are systematically underserved with critical information, while the reach and breadth of pro-government outlets is extensive.

In this environment, Hungary has one of the lowest levels of trust in the entire survey (28%), though is much higher for sources that people use themselves (54%). According to survey results, RTL Klub is the most trusted of the brands, with pro-government TV2 least trusted. Social media networks are a key source of news.

Paywalls are yet to be introduced to the Hungarian online market, only 7% of respondents pay for online news. Other innovations include content production in various formats (visualizations, videos, etc.), of which podcasts are a success – 32% of respondents have used podcasts in the past month according to the survey.

Total sample size was 75749 adults with around 2000 per country. Fieldwork was undertaken at the end of January/start of February 2019.

The survey was carried out online. The data were weighted to targets set on age, gender and region, to reflect the total population. The sample is reflective of the population who have access to the internet and respondents were screened out if they had not accessed news in the last month. Note that in countries with more limited internet use, including Argentina, Brazil, Chile, Greece, Mexico, South Africa and Turkey, our samples tend to be based more around urban areas, which should be taken into consideration when interpreting results

Qualitative research with younger news consumers in the UK and US was carried out by Flamingo Research in February 2019. Participants had high/mid-level interest in news. Research involved tracking news consumption on mobile phones, diaries and in-depth interviews.