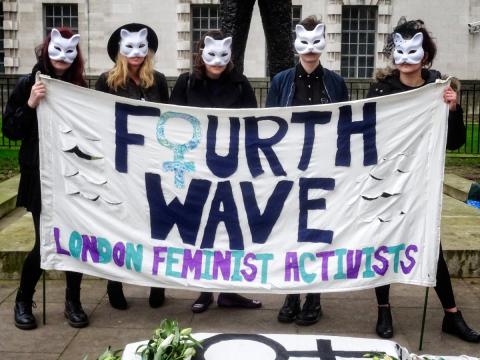 Fourth-wave feminism is here. Misogyny and sexism are challenged like never before.

Five years ago, Laura Bates, a British feminist writer, threw a wobbly when she stumbled upon a game that allowed children to perform plastic surgeries on a fictional female character. “Horrendous, but no longer surprising,” she wrote in a blog post published by The Guardian, a British newspaper. She then shared her outrage on Twitter where support from thousands of users prompted Google and Apple to promptly delete the game from their iTunes and Google Play app stores.

Such a response would be unconceivable only a few years ago when feminist voices were not as powerfully heard as today. Thanks to the rapid growth of social media though, feminist ideas are spreading like wildfire, reaching millions of activists faster than at any time in history.

Social media have grown dramatically in the past few years. Today, there are nearly 3.4 billion active social media users in the world, which means over 80% of the globe’s 4.2 billion internet users, according to Brandwatch, a social media monitoring company.

Thanks to their popularity, social media have become a petri dish of social change, but also a nidus for social movements that keep erupting in today’s increasingly connected world. Feminism is just one of the plethora of groups, communities and movements that benefit from their growing power. In 2009, Jessica Valenti, an American feminist writer and one of the founders of the Feministing blog, told the New York Times that the fourth-wave feminism will probably happen online. She was right.

The fourth-wave feminism movement is “defined by technology,” allowing women “to build a strong, popular, reactive movement online,” Kira Cochrane, an advocate for women's rights and head of the Features section at The Guardian wrote.

The first feminist wave took place in the late 19th and early 20th centuries. It focused on women’s suffrage, property rights and participation of women in politics. The second wave, between the 1960s and 1980s, aimed to reduce sex-based inequality in family and at the workplace, tackling issues such as reproductive rights. The third-wave feminism, from the 1990s to the 2000s, focused on individualism and diversity.

The revival of feminism, the fourth wave, is happening today and is driven by the internet. That is partly explained by the more prominent presence of women on social media. According to Spredfast’s 2018 Social Audience Guide, females are more active than men on Facebook (52%), Instagram (58%), Pinterest (60%) and Snapchat (70%). Women use social media more often and on a daily basis, checking their timeline and interacting with brands more frequently than men.

Feminist activism online was spurred, among other things, by the growth of right-wing populism, a downright sexist ideology that often threatens women’s rights.

The popularity of social media among women is explained by the safety (or, at least, the feeling of it) that the internet offers. Generally, people who normally would not dare speak publicly are fine doing that on the internet where there are no inhibitions or fears.

Dziewuchy Dziewuchom (“Gals4Gals” in Polish), an online campaign launched in Poland in 2016 as a reaction against proposed legislation to completely ban abortion, first attracted 100,000 members in its Facebook group. Then, thousands of people filled the streets of major Polish cities in one of the largest protests in Poland’s recent history. Faced with such protests, parliament suspended the vote on the “stop abortion” law (as the controversial legal provisions became known).

The Everyday Sexism Project, a website cataloging instances of sexism experienced worldwide on a day-to-day basis, is now used by governments in various countries to tackle sexual harassment in the workplace and to help police improve their reporting on sexual offenses, Bates, the creator of the website, told HuffPost.

But nothing has thus far matched the impact of #MeToo, a movement born in a social media hashtag that two years ago began its viral spread worldwide. The very first post from the actress Alyssa Milano (who asked her Twitter follower to write “me too” if they have been sexually harassed or assaulted) received around 500,000 replies within 24 hours.

Brittney Cooper, an American author who co-founded the Crunk Feminist Collective blog, said that online feminism is “loud and noisy, but it makes you think and it makes you move.” That makes feminism more powerful than it has ever been.

Fridon Lala is a graduate student in Public Administration at the School of Public Policy at CEU.